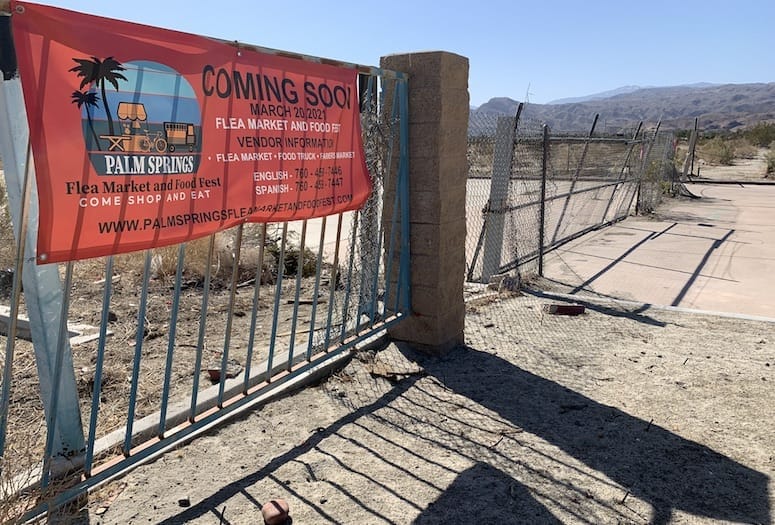 Located at 675 Crossley Road just adjacent to the Walmart Super Center in Palm Springs, the Palm Springs Flea Market and Food Fest has found a home.

In late April 1964, one of Palm Springs’ first drive-in movie theaters opened with a screening of Walt Disney’s Three Lives of Thomasina. The lot, operated by Metropolitan Theatre and sitting off of what is now Crossley Road just south of Ramon Road, could hold 800 cars. The final films to screen were Everybodys’ All-American with Jessica Lange and Steven Segal’s Above the Law in November 1985.

The property later became a swap market and an RV Park, but for at least the last decade it has sat empty while the Gene Autry Plaza across the street attracts brisk business thanks to a Walmart Super Center.

Alan Schwartz has heard several recollections about the property since he recently leased seven acres of it from the Agua Caliente Band of Cahuilla Indians. Schwartz, who owns an estate business and a vintage store called Just Stuff in Cathedral City, has created the Palm Springs Flea Market and Food Fest.

“The theme is to come shop and eat,” says Schwartz, who is deaf. “This is a great time to start something like this. There’s not much to do in Palm Springs right now and many of the street fairs are not going to reopen until the fall.”

After a soft opening last weekend that Schwartz says attracted close to 1,000 people, the Palm Springs Flea Market and Food Fest will run every weekend through June 20, according to the website. The hours are 8 a.m. to 4 p.m. Saturdays and 10 a.m. to 4 p.m. Sundays.

"We had about 30 vendors last weekend and we have capacity for 125, so we’re expecting this to grow,” Schwartz says. “We had game vendors, jewelry, golf items, vintage items, and just a bunch of stuff. We don’t have a specific type of item, so that allows people to bring whatever they want to sell.

Since last weekend’s opening, he has received “a lot of feedback” and readily admits, “I’m learning.” His biggest obstacle recently was establishing a street address for the property, receiving notice earlier this week that the address is 675 Crossley Road.

Due to the pandemic, food sales are restricted to food trucks and pre-packaged foods, Schwartz says. Eventually as restrictions ease, the food fest portion could expand.

Schwartz, who opened his vintage store in December 2019, says he has been looking to start the flea market and food fest event “for a while,” that it “has been hard to find property,” and he “wanted to be in Palm Springs.”

The seven acres allows Schwartz to divide the lot into thirds with one part for the event, one for parking, and the last for overflow parking. He’s happy to help clean up the area that often attracts homeless encampments. “We’re trying to make it better and accessible,” he says.

• READ NEXT: What's Happening in Greater Palm Springs in April? We have 20 Answers.