Palm Springs Gay Rodeo is a Place of Inclusion, Comradery 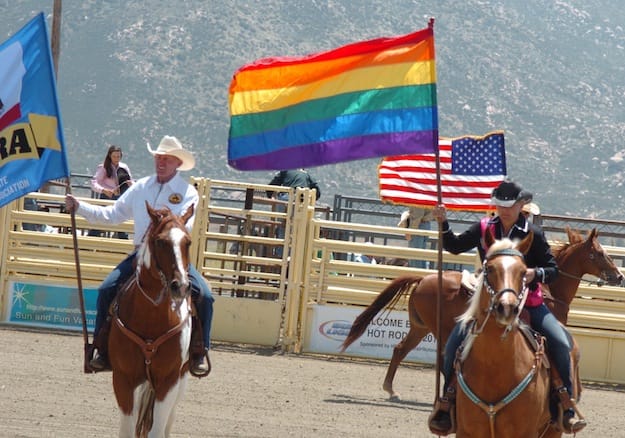 Judy Galloway can count the two-step and line dance among her repertoire, but what the Palm Springs resident has really gained from years of attending and administrating gay rodeos is a sense of belonging.

“It’s like being part of a big team,” said Galloway, who attended her first rodeo in the 1980s when she was living in San Diego. “It’s doing things together for good causes. You develop lasting friendships and stay connected through the rodeos.”

Ed Hamilton also found that same comradery when he attended his first gay rodeo in the 1980s. A product of rural Texas, Hamilton grew up around horses and attended a high school where guys split their time between football and rodeo.

“It was really cool to find like-minded individuals who did what I liked,” said Hamilton, president of the Greater Palm Springs Chapter of the Golden State Gay Rodeo Association. “To be able to come together, put on rodeos and raise money for the community.”

This weekend’s Palm Springs 2013 Hot Rodeo continues that tradition, featuring a mix of competition, a pool party, dancing and raising money for local organizations. Since 2009, the rodeo has been held at the A.C. Dysart Equestrian Park in Banning, which has proven to be a good fit.

Hamilton said as recently as 2008, the gay rodeo was held in Palm Springs at the location where Wal-Mart now sits on Ramon Road just east of Gene Autry Trail. But the cost and labor to create a equestrian facility from scratch compared to one already in existence made the move to Banning all the more logical.

The use of a facility also creates a greater financial opportunity to donate the proceeds to community organizations, Hamilton said.

“We have done what other rodeo associations are still struggling with and that is giving money back to the communities,” Hamilton said. “If we can continue to give back, then we remain a respected organization within the community. We don’t want to look at being big again, but being intelligent about how we operate.”

Last year, the Greater Palm Springs Chapter donated money to the Palm Springs Sisters of Perpetual Indulgence, the Palm Springs Leather Order of the Desert and the city of Banning Youth Foundation Awards program. “We hope to expand on that this year,” Hamilton said.

While social activities have been incorporated over the years to draw in more of the non-rodeo crowd, the competition run over two days remains the center of attraction. Hamilton said the difference between gay and straight rodeos is the way men and women compete. In a gay rodeo, men and women can compete in any event but will be judged only against their gender, while in straight rodeo there are gender specific events.

Galloway said she witnessed women step forward to participate or help administrate from the beginning. “As a woman, it was heartening to see that,” Galloway said.

Even 30 years since some of the first gay rodeos were held, the event remains an opportunity to show how rodeos can be a platform for inclusion that Galloway and Hamilton both found.

“Even in 2013, there are a lot of people who don’t know that it’s OK to be exactly who they want to be,” Hamilton said. “So, if we can help that a little bit then we will, and we’ll continue to represent and show what we’re like and inspire others to be who they want to be.”