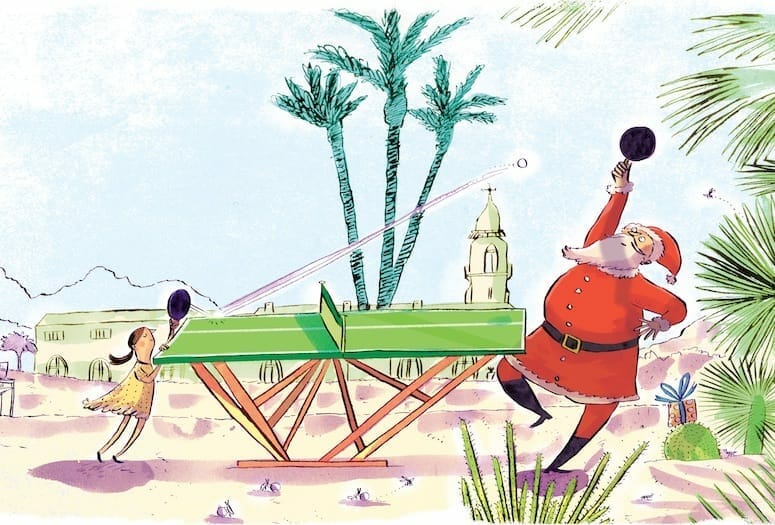 Call it ironic (we will): As the Coachella Valley has grown, year-end holidays have diminished. “Wait,” you say, “there’s a Christmas light parade in downtown Palm Springs. Restaurants, bars, hotels, and casinos from one end of the valley to the other host prix-fixe brunches and New Year’s Eve bashes. Retail establishments decorate their windows with holiday cheer and [yada yada yada].”
We make our case as follows and let you be the judge (or jury).

In 1934, The Desert Sun newspaper announced that Santa Claus would arrive in Palm Springs not by sleigh after kiddies had been tucked into bed, but rather by airplane at 2 p.m. After several circles over “the village,” as downtown was then known, and flying low “so that he can wave a greeting to all the children,” he would land at the airport, where he would step into a coach drawn by a half-dozen horses and “be escorted to the community Christmas tree … by a number of horsemen, all dressed in colorful holiday attire.” Santa’s distribution of stockings filled with candy and nuts to 400 children would be followed by “excellent music contributed by the best talent of the village.”

Need we go on? OK, we will, because there’s plenty more where that came from. Within a week of the above, the local newspaper declared, “Yuletide in the desert is proving enjoyable for many Southland people as well as Eastern visitors who are in Palm Springs for El Mirador’s colorful fiesta del sol with the program of outdoor sports in the sunshine being augmented by smart evening affairs.” Activities included a scenic drive in a stagecoach, a picnic party amid towering palms, diving exhibitions at El Mirador’s pool, and table tennis tournaments. Participatory decorating of the Christmas tree in the lounge would be followed by Santa’s arrival with presents for “youngsters.”

The calendar for Christmas and days following it included children’s games, afternoon tea and eggnog (presumably not mixed), more diving exhibitions, trap and skeet shooting, an aquatic carnival for guests, motor trips to the annual gymkhana equestrian event at Palm Springs Riding Stables, and the annual New Year’s Eve dinner-dance. It’s worth noting that El Mirador opened with a who’s who of celebrants on a New Year’s Eve (in 1927). 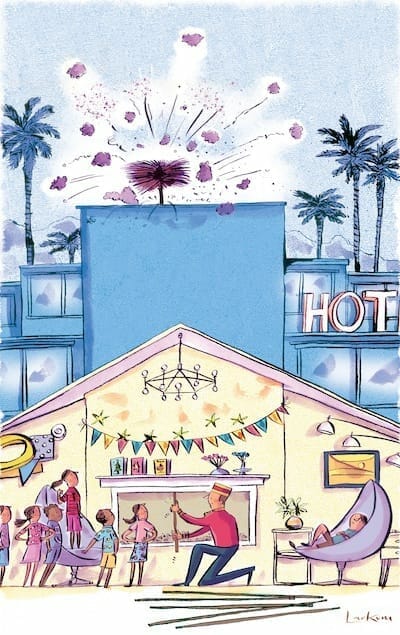 A few years after Santa’s airport arrival, he was expected at the hotel by the more traditional chimney route. In 1937, The Desert Sun reported that El Mirador bellboys were “climbing up and down the chimney cleaning it out for Santa Claus.” However, the article continued that “due to desert sand and lack of water,” jolly old St. Nicholas would leave his reindeer in the mountains and arrive by two burros loaded with toys. Never mind that a team of reindeer couldn’t make it. El Mirador’s lobby featured a large silver tree trimmed with blue lights, silver garlands covered the ceiling, and bells and wreathes in silver and blue embellished colonnades.

In 1939, the newspaper noted that, in addition to lighted trees throughout El Mirador’s grounds and at entrances to bungalows, a “huge star” would shine through the four light-outlined arches of the property’s signature tower, each corner of which would include a Christmas tree.

A Christmas Eve movie for children would feature Mickey Mouse and Donald Duck, followed by carolers and Santa coming “right out of the fireplace.”

One could, with immense justification, credit Palm Springs pioneer Nellie Coffman for setting the holiday scene, so to speak. The proprietor of The Desert Inn introduced to the village a special hospitality that made it the place to be not only for out-of-town guests, but also for much of the local community. She particularly made sure the village’s children had their own Yuletide party.

Palm Springs News in 1933 reported that the inn’s holiday celebrations would begin with a lecture by Capt. Dudley Colette of the Southwest Museum on the Black Christ of the Mayan civilization. Other events, in addition to the children’s party, included a shuffleboard tournament, a bridge tea, a moonlit picnic, a grill luncheon at the Salton Sea’s ancient stone fish traps (built by Cahuilla Indians), and Indian dancers from the Sherman Institute. The Caballeros (a choir of 10 male singers) would serenade guests with carols on Christmas Eve and Christmas Day.

As for New Year’s Eve/Day, Palm Springs News reported that 1934’s guests took part in a poetry and prose writing contest: “A valuable prize was offered for the best poem or article telling of New Year’s on the desert. Charles H. Clark of Seattle, Washington, was awarded first honors in the contest by the celebrated judges, John Steven McGroarty, poet laureate of California, and Thomas A. O’Donnell of Palm Springs. Mrs. Nellie Coffman was consul-at-the-bar and read all of the submitted poems and articles for the judges. Charles F. Morrison of New York City, who with Mrs. Morrison is enjoying an extended sojourn at The Desert Inn, won the booby prize with his clever two-line poem, which smacked of Tennyson.” 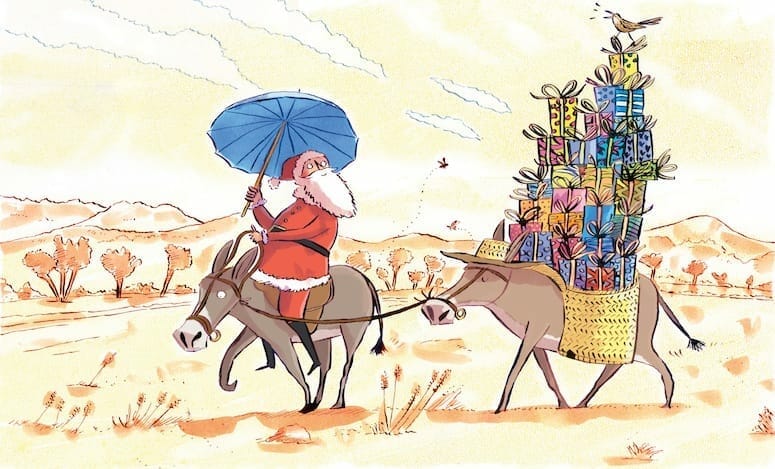 The following year, the inn opened its newly constructed Dragon Room cocktail lounge on the afternoon preceding New Year’s Eve. According to an article in The Desert Sun, “many prominent society and cinema notables” attended, and on New Year’s Eve, “Miss Verna Gordon, premiere danseuse, presented several interesting dances from her extensive terpsichorean repertoire.” An orchestra then presented a concert, following which “guests enjoyed dancing.”

In the mid-’40s, when El Mirador had been converted to Torney General Hospital, Nellie Coffman hosted soldiers on Christmas Day (as well as for Thanksgiving Day dinners).

Though The Desert Inn and El Mirador established high bars for holiday festivities, The Limelight reported on Dec. 26, 1936, that the “brightest spot in the panorama and pandemonium of New Year’s Eve promises to be the Rendezvous Roof atop Carl’s Restaurant in the Plaza. The new restaurant with a seating capacity for 225 on the arched and pillared lower floor and 180 on the luxurious penthouse roof will be the scene of a full house, according to present indications. Two nationally popular orchestras, Bill Amendt and his ten boys, and Lico Estrada’s South American rhumba interpreters will give the music for countless parties, upstairs and down.” Post-opening, Palm Springs News confirmed that Carl’s “drew the lion’s share” of the town’s “happy celebrants.”

Catering to those with passions related to the desert’s sporting activities, other venues attracted their own holiday crowds. Square dances and Virginia reels took place at The Barn, where the local horse-riding club celebrated the holiday. Actor Robert Taylor, in cowboy attire, attended the Desert Rider’s 1936 soirée and, according to Palm Springs News, set feminine hearts aflutter. 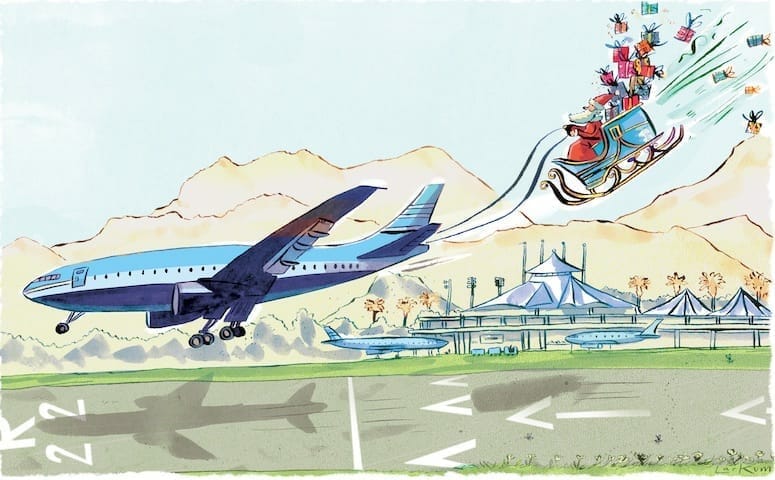 The same edition described another special-interest celebration: “With parties galore, refreshened with plenty of enthusiastic — if not too expert tennis [remember it was the holidays], members of the Racquet Club and their friends did quite nicely New Year’s and the weekend following. During those busy days, there were many quite notable people about the picturesque club.”

In 1938, Palm Springs News announced that the Doll House was tossing its first party, “Una Fiesta Mexicana,” on New Year’s Eve: “Always different, always charming, the Doll House has just never gone in for parties but is making an exception of its rule this year. … Entertainment will be plenteous and hot. For instance, there will be a two-piano combination, which will make all customers sit up and take much notice, and a score of other nifty features.”

We can’t help but envy people who enjoyed the heyday of Palm Springs holidays — what with a hotel cleaning its chimneys for Santa, terpsichorean entertainment, and other nifty features of full-blown celebrations. 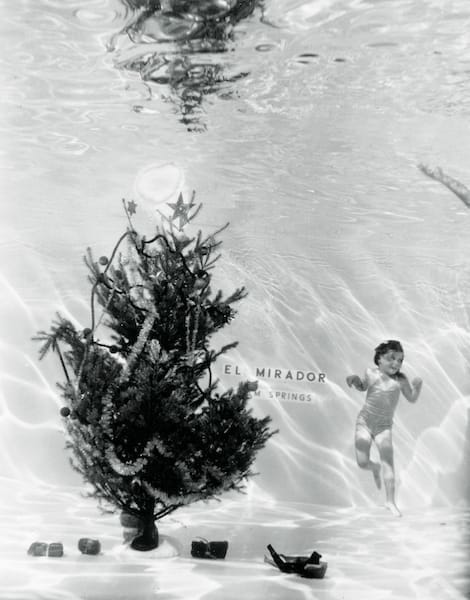 The 1942 menu’s premium beverage suggestion was 1933 Paul Masson Extra Dry Champagne for $5.50 a bottle. Those wanting a dessert wine could order a glass of Beaulieu Muscat de Frontignan for 30 cents.

• READ NEXT: Who Are the Coachella Valley's Top Dentists for 2022. See Our List.