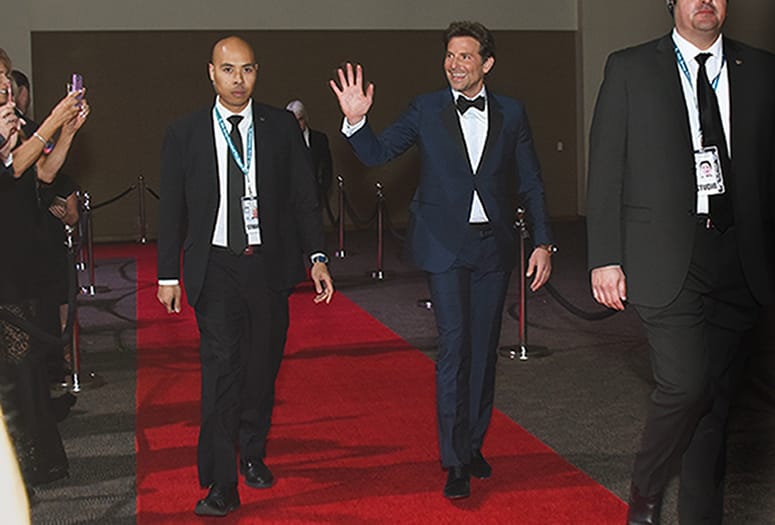 Bradley Cooper and his escort.
PHOTOGRAPHS BY LORETTA VLACH

The 30th annual Palm Springs International Film Festival hosted another glamorous all-star Film Awards Gala. This year’s top-trending films and their stars traveled to the desert to walk the media-adorned VIP red carpet into the Palm Springs Convention Center. More than 1,000 guests also walked their own red carpet into a cocktail hour of mixing and mingling with film and celebrity aficionados from all over the world.

After guests were seated at their tables, adorned with crystal centerpieces festooned with an abundance of roses, they were served the festival’s traditional short rib dinner and welcomed by Festival Chairman, Harold Matzner.

Alfonso Cuarón received the Sonny Bono Visionary Award for Roma, presented by Gary Oldman, who he directed in Harry Potter and the Prisoner of Azkaban.

Melissa McCarthy received the Spotlight Award presented by her Can You Ever Forgive Me? co-star Richard E. Grant.

Bradley Cooper received Director of the Year, presented by his A Star Is Born co-star, Sam Elliott.

Closing out the evening, Glenn Close received the Icon Award, presented by her co-star from The Paper, Michael Keaton. Close entertained the audience with her comments and facial expressions to illustrate the difference between an Icon award and an Emoji award.

The presenting sponsor of the Film Awards Gala was American Express and major sponsors were AT&T and Entertainment Tonight. Mary Hart served as the evening’s host for her 16th year in that position.

Honorees were presented with either the John Kennedy "The Entertainer" statue or a Chihuly glass sculpture created by Dale Chihuly.