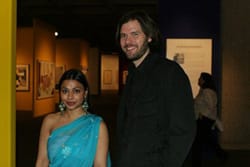 Here our Palm Springs Life editors tell you what they simply could not miss at this year’s Palm Springs International Film Festival.

Can Mr. Smith Get to Washington Anymore?

WHAT IT’S ABOUT
This documentary follows the 2004 Missouri Democratic primary to replace retiring 28-year veteran Dick Gephardt. It is told from inside the campaign of Jeff Smith, a 29-year old part-time political science instructor running against state Rep. Russ Carnahan, whose name in Missouri equates to the Kennedy name in Massachusetts. Trailing by 40 points in the polls, Smith mobilizes a grassroots insurgency. While no one needs to tell us that candidates with access to power and money have advantages regardless of their abilities, this film asks if it is still possible for American voters excited by a person’s ideas and ability to sway the political process. WHY I WON’T MISS IT
As much as I find the political process despicable, I find it fascinating. I especially love listening to Cokie Roberts’ reports on NPR (even though I know she’s making them from home in her bathrobe). The idea of “the everyman” becoming a politician — even president — has been covered, as noted by this film’s title reference to Capra’s famous Jimmy Stewart vehicle. But this is a real story about real (albeit political) people. I also want to see this film because 2008 election campaigns are already underway, and maybe I’ll learn something before I have to decide between known and unknown quantities.

ADDENDUM
I’ve already seen An Inconvenient Truth, also on the film festival schedule, so I’ll skip it. But I highly recommend it for anyone who has yet to see Gore’s documentary on global warming.

WHAT IT’S ABOUT
In classic David Lynch style, that’s hard to say. Even actress Laura Dern confessed at the Venice Film Festival that she didn’t know what the movie was about or what role she was playing. She hoped, in fact, that seeing the film’s premiere at the festival would help her "learn more." On a broad level, the film is said to be about an actress (played by Dern) who lands a big-break role in a new film — an exciting prospect, until she discovers the film could be cursed by murder plots and romantic betrayals and the lines between what is real and what is scripted begin to blur. Lynch has said it is a mystery about “a woman in trouble.” Period. This is the first Lynch film to be completely shot in digital video. (The quirky director has sworn off using film.) Lynch fans need only the brand-recognition of a Lynch film to know they will be standing in line for a ticket. WHY I WON’T MISS IT
While I never watched Twin Peaks and never understood Mulholland Drive (who did?), certain scenes from Lost Highway (specifically the one with Robert Blake answering the phone) were some of the creepiest I’ve ever enjoyed on the silver screen. They have kept me wanting for more from Lynch and have kept me holding other directors to a higher suspense-scene standard. The man behind Eraserhead and Blue Velvet, among other offbeat cult classics, is a master of weirdness and a legend of the unexpected. Rolling Stone’s review of the film stated this is “arguably his most ambitious mind-bender yet.” I would love to see Lynch pull off some more eerily unforgettable scenes. And even if he doesn’t, the film is guaranteed to be dark, bizarre, and anything but trite — all good things in my critic’s notebook.

WHAT IT’S ABOUT
This documentary chronicles the Texan country music group Dixie Chicks, whose singer Natalie Maines told a London audience, on the eve of the U.S. invasion of Iraq in 2003, that, “Just so you know, we’re ashamed the president of the United States is from Texas.” The fallout was immediate and damaging, with American listeners demanding radio and album sales boycotts. The band members were branded “unpatriotic” and even received death threats. Shut Up & Sing follows the Dixie Chicks from 2003 through to the 2006 tour, touching on their personal lives and the events that followed what they call “The Incident.”

WHY I WON’T MISS IT
Now that American support for the Iraq war is in freefall and President Bush’s approval ratings are in the toilet, Natalie Maines’ comment seems almost prescient. It will be fascinating to see the consequences from her remark within this new context. If she said the same thing today, would the backlash be as heavy? And I have to admire the true grit of these immensely talented women, who stood their ground on free speech and refused to be cowed by so-called “patriots.” Isn’t that a most American trait? ADDENDUM
Shut Up & Sing won People’s Choice second runner-up award after its premiere at the Toronto Film Festival in September; it’s running in Palm Springs as part of the Awards Buzz — Documentary section. The film’s co-director Barbara Kopple has already won two documentary Oscars: for Harlan County U.S.A. and American Dream. The other co-director is Cecilia Peck, Gregory’s daughter, so Shut Up & Sing comes with a pretty impressive pedigree.

Who Gets to Call it Art?

WHAT IT’S ABOUT
Iconoclast Henry Geldzahler, the first curator of contemporary art at New York’s Metropolitan Museum of Art, shows us the icons of postwar art through rare, archival footage and in-depth interviews with the greatest talents of the day — David Hockney, Mark di Suvero, Frank Stella, James Rosenquist, Ellsworth Kelly, Larry Poons, John Chamberlain, and many others. WHY I WON’T MISS IT
I’m an art junkie. This is a must-see for collectors and enthusiasts of Modern and contemporary art. The biggest names in the New York art scene, especially in the 1960s, appear, with candor, at their best and worst.

ADDENDUM
The rebel in me loves how New York’s Abstract Expressionists stuck it to traditional Impressionists and Post-Impressionists and drew the eyes of the art world from Europe to the United States. I’ve seen a portion of this movie and practically salivated for more. I most look forward to seeing archival footage of the masters at work and hearing their trenchant interviews.