A founder of Palm Springs Life, celebrated illustrator Earl Cordrey (1902–1977) designed the original logo and the cover for the premiere issue, March 20, 1958. He continued to illustrate covers and other art for the magazine until the mid-’60s. 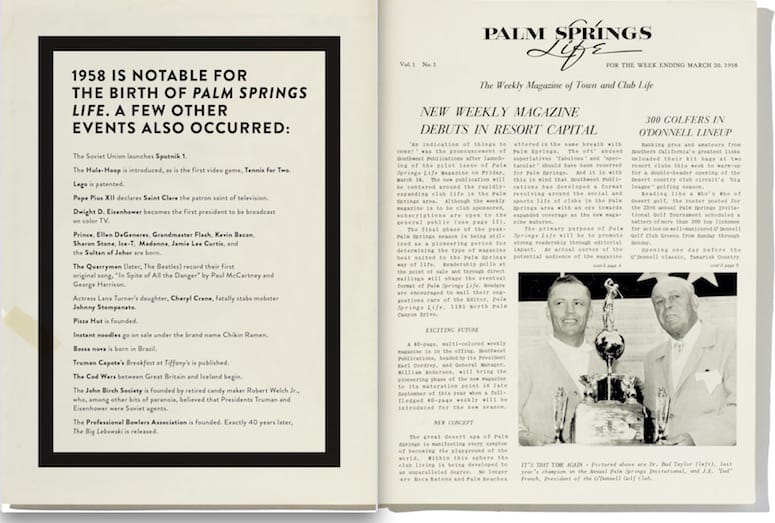 The Birth of Palm Springs Life

Before PSL, there was The Villager, a charming little promotional magazine published by legendary Midwest gambler, oilman, and (reputed) gangster Ray Ryan. Known in his day as “Mr. Palm Springs,” he was a tireless promoter of development in the burgeoning city.

Hoping to give The Villager a little competition, a couple valley newcomers, including artist Earl Cordrey, launched Palm Springs Life in March 1958 and quickly ran into financial difficulties. They turned to Milt Jones, who had come to Palm Springs from Newport Beach to open a pharmacy. A natural salesman who had just opened the Jones-Taylor ad agency, Milt turned PSL’s fortunes around in a series of canny moves ... not the least of which was absorbing The Villager. 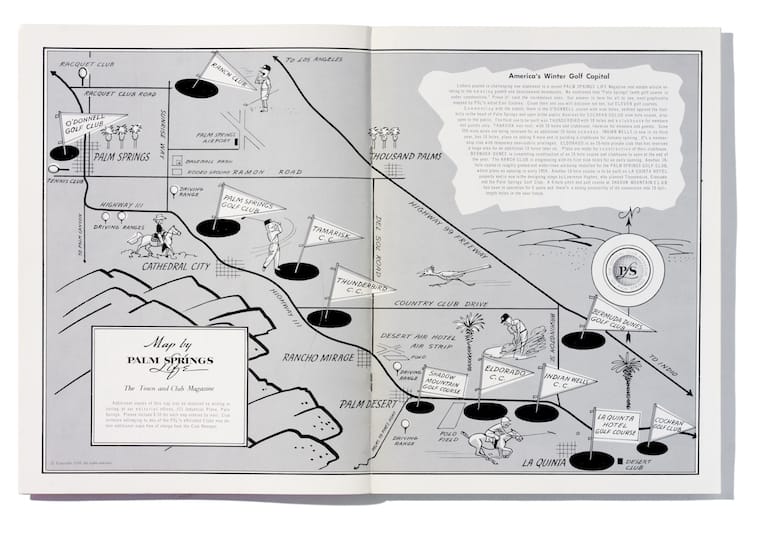 How brown was our valley

While these days there appears to be no breaks between the cities in Greater Palm Springs, it wasn’t long ago that there were great swaths of desert everywhere you went in the valley. When Thunderbird Country Club was being built, Bob Hope famously quipped that it was so far out in the desert that the greens were patrolled by the Foreign Legion. To give an idea of the amount of undeveloped land, take the case of the property now occupied by The River and Omni Rancho Las Palmas in Rancho Mirage. In 1958, it was the site of the Desert Air Hotel, where guests flew their private plans into a small air strip and, in high season, a massive luau was attended by hundreds of tourists. 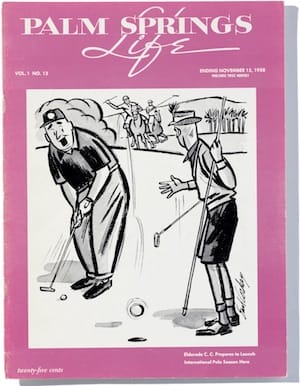 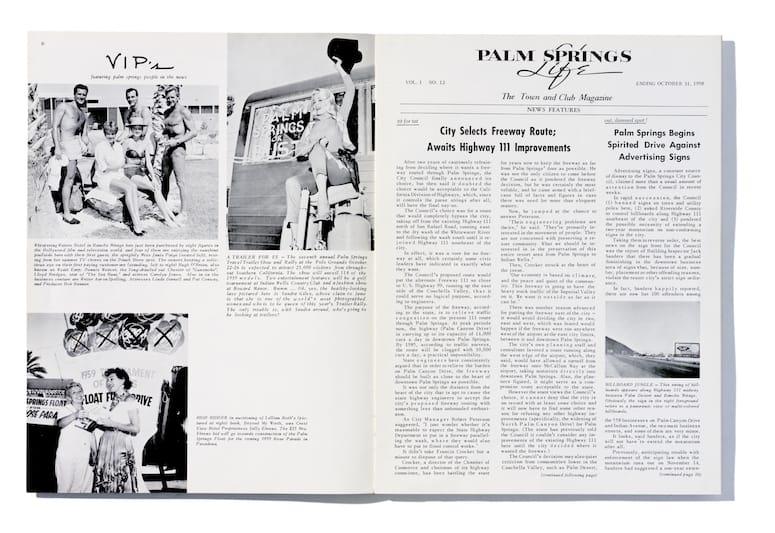 Signs of the Time

We don’t want to comment too much on the portrait of television actors Hugh O’Brian (Wyatt Earp) and Lloyd Bridges (Sea Hunt) painfully sucking in their stomachs so that they ostensibly touch their spines. Instead, we would like to draw attention to the article at right, which shows some forward thinking on the part of the Palm Springs City Council in attempting to ban the proliferation of billboards lining Highway 111 south of the city. Though this visual obscenity still exists throughout the valley (billboards touting the integrity and prowess of local legal eagles may be the most egregious), the article does demonstrate that maintaining the community’s quality of life was always a priority. 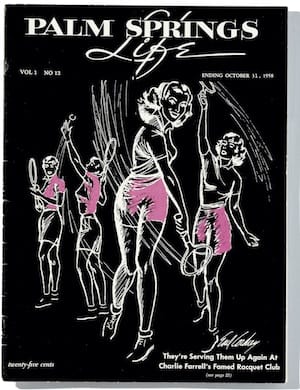 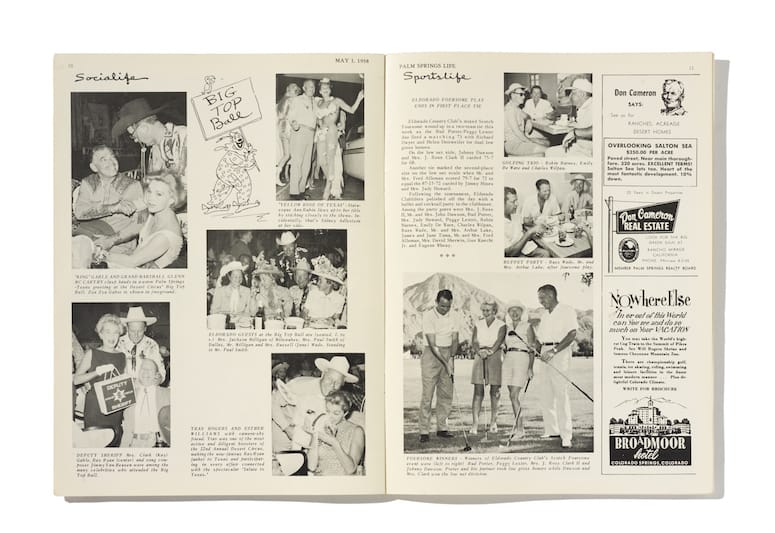 Cowboys without a cow in sight

Perhaps one of the oddest and, in retrospect, quaintest obsessions of Palm Springs visitors and residents in the early days was the tongue-in-cheek delusion that the town was somewhow part of the Old West. When former NYC Mayor Jimmy Walker visited the village, he was “kidnapped” off his train by armed desperados. When funds were needed for Our Lady of Solitude Church, the Desert Circus was created to raise money and awareness through rodeos, parades, and a kangaroo court where those not wearing western attire were fined considerable amounts of cash. Hugely popular were the chuckwagon breakfasts where nary a cow could be seen, heard, or smelled. 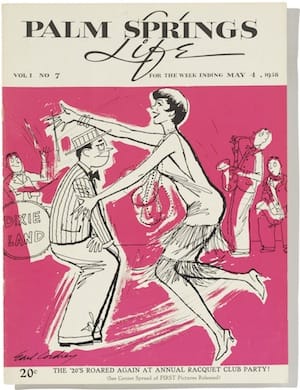 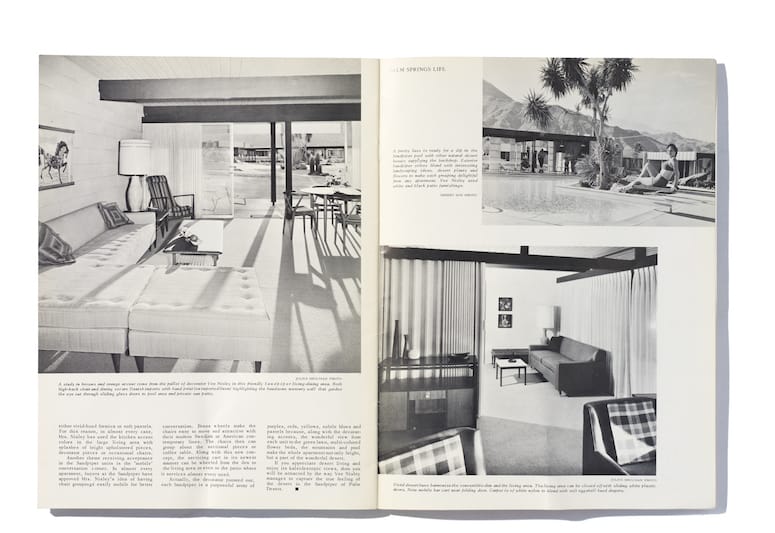 A midcentury home in present-day Greater Palm Springs would be unthinkable without vintage Barcelona chairs, a Wegner coffee table, or (at the very least) a couple of matching Eames recliners. However, a little perusal of the furnishings of the newly opened Sandpiper development (photographed in unmistakable style by Julius Shulman) suggests that a certain sparse functionality ruled 1958 aesthetics. It is interesting to note that the Sandpiper, a Palm Desert community designed by famed architect William Krisel, is still very much in demand. No doubt, some of the furnishings have been upgraded with the help of the Design Within Reach catalog. 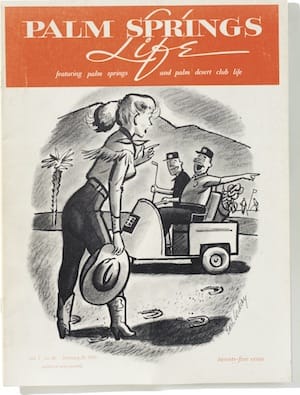 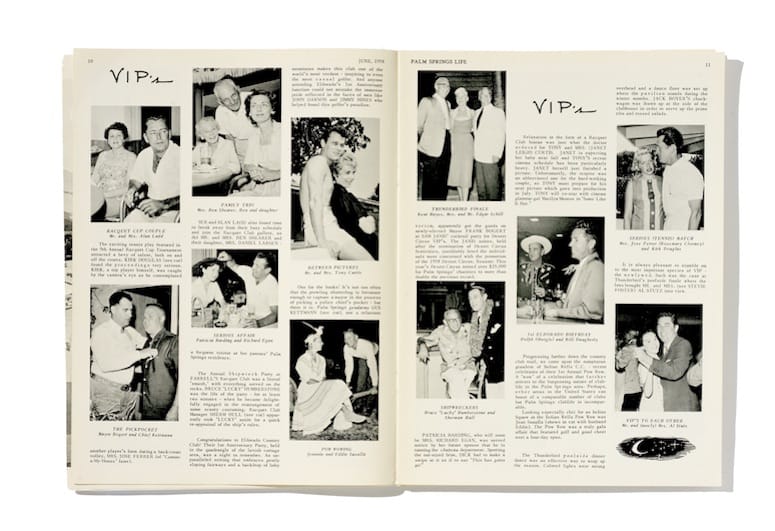 A popular, but apocryphal, story that has long circulated about why Hollywood stars chose Palm Springs as their getaway is that mogul Louis B. Mayer had a morals clause in his contracts that spelled out the lascivious behaviors that would not be tolerated within 100 miles of his studio. Since downtown Palm Springs is 115 miles away, it became the safe place to play. There’s no doubt that the city became the playground for several generations of Hollywood royalty, but the truth behind the contractual obligations is actually a bit more mundane. Because of re-shoots, personal appearances, and the like, actors had to be able to get back to their studios within a day 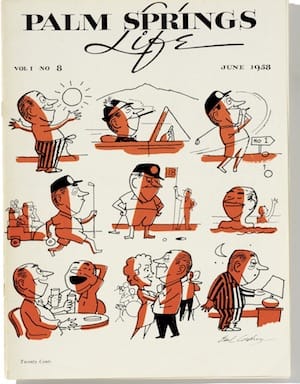 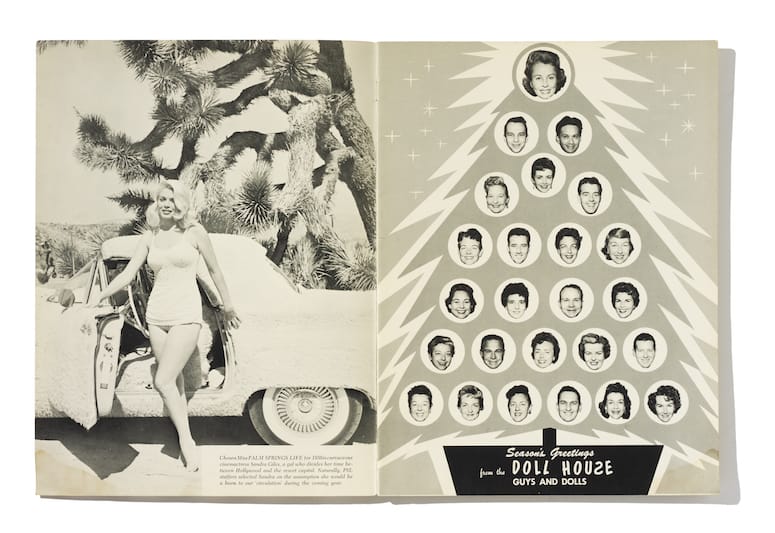 Sultry Sandra Giles and her fin-to-fender shag-carpeting–covered T-Bird certainly must have drawn attention in the village, but whether it resulted in increased circulation remains a mystery.

The Doll House was one of the village’s most popular eateries at the time. Interestingly, it was recently revealed that the woman who posed for the original World War II Rosie the Riveter poster was Naomi Parker Fraley of Alameda, California. After the war, she moved to Palm Springs and became a waitress at the Doll House. Our office poll thinks she may be in the fourth row, third from left. 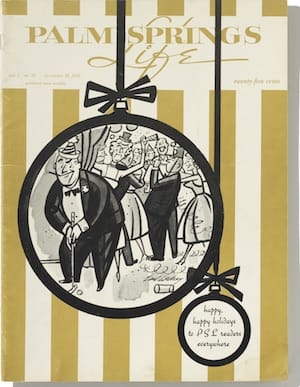 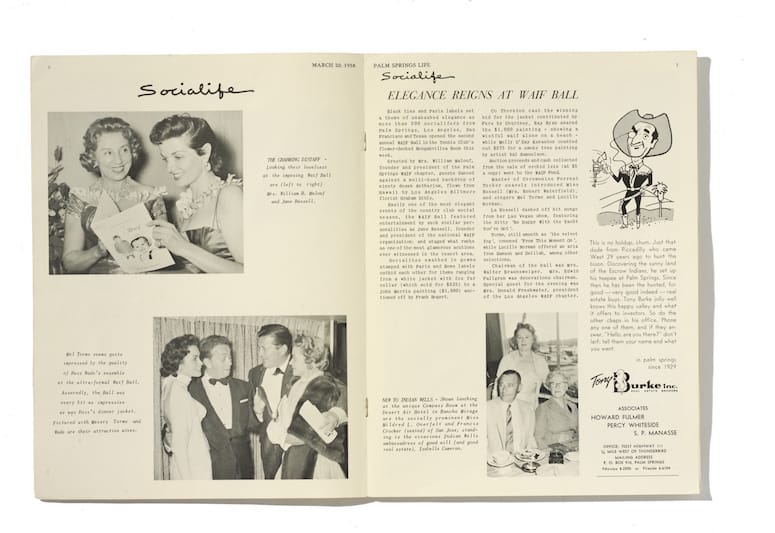 Actress Jane Russell founded the World Adoption International Fund, dedicated to finding homes for children in need, and hosted a benefit in Palm Springs that was the height of the social season. Unfortunately, her informal “adoption” of an Irish baby boy from his impoverished, weeping mother may have undermined the organization’s mission. Still, that didn’t stop the charming distaff from coming out in droves to support the cause — some of whom PSL couldn’t be bothered to name in photo captions, other than to point out that they were “attractive wives.” Time’s up! 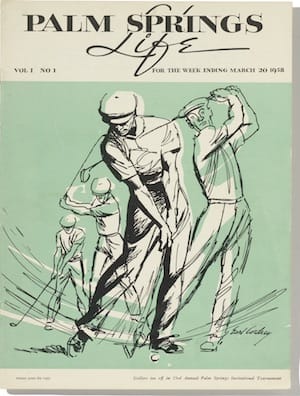 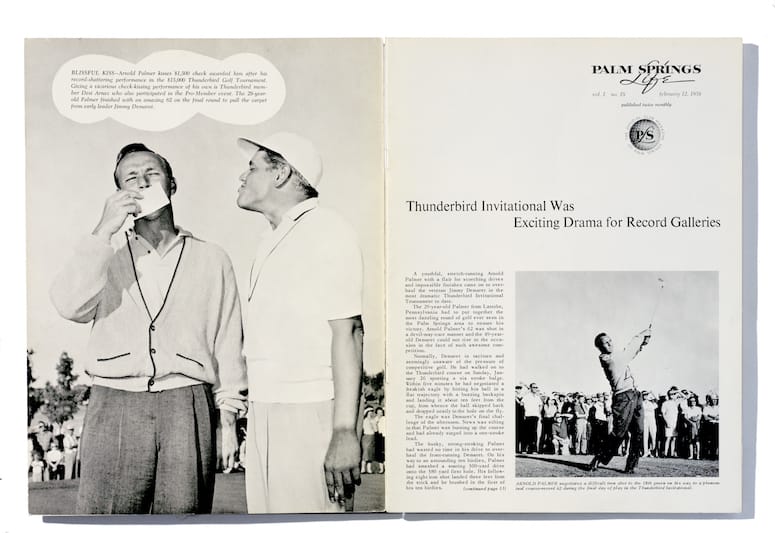 You’re probably thinking that the $1,500 Arnold Palmer won for the prestigous Thunderbird Invitational was pretty nice moola when adjusted for inflation. Actually, in today’s dollars, it amounts to a little more than $13,000 ... kind of a trifle when you consider that Jon Rahm’s 22 under at the 2018 CareerBuilder Challenge came with a check for $1.062 million. Still, performances by Arnie, Sam Snead, and local hero Al Geiberger put Palm Springs golf on the map. There are currently 110 courses in Greater Palm Springs. 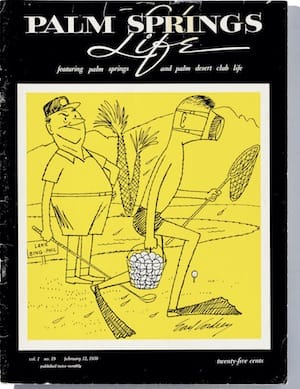 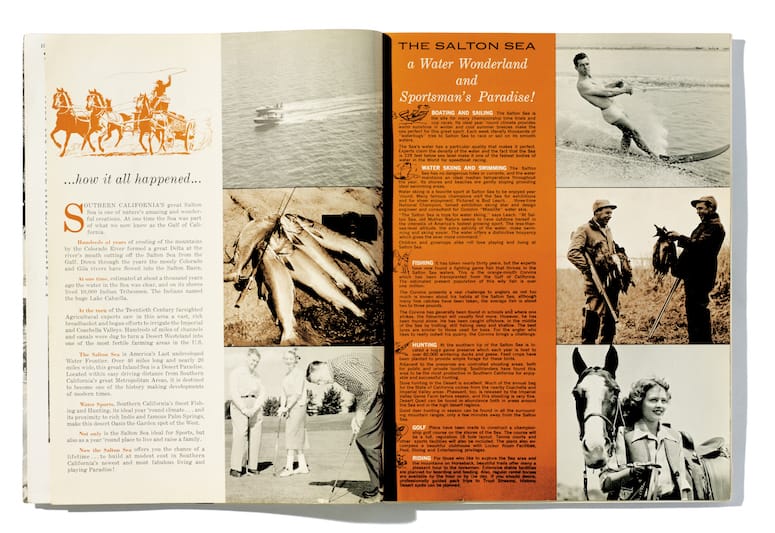 WE’VE GOT A BRIDGE TO SELL YOU

Ah, a home in paradise — at “modest cost,” no less. Such was the promise of the Salton Sea, an artificial inland lake formed by runoff from the Colorado River (the result of poorly planned irrigation systems) that was a thriving resort in the ’50s and ’60s.

If you were one of the lucky few who got in early on this real estate bonanza, we have some bad news: Your Zillow score has likely dipped. High concentrations of salt have forced oxygen out of the water, which is further contaminated by pesticides. Toxic sludge and fish carcasses are the result.

OK, maybe we made a mistake with this one. But that’s no reason not to take our real estate coverage seriously. Perhaps we can interest you in a subprime loan? 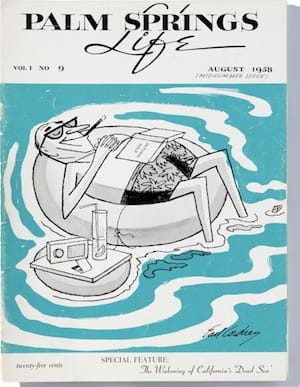 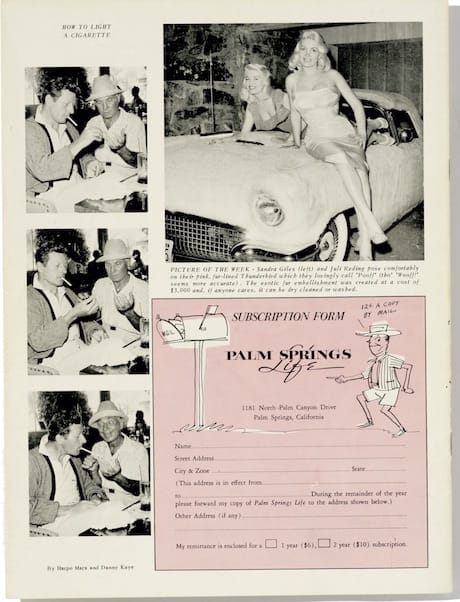 For just $6 a year (or 12 cents a copy — math was never our strong suit), we taught crucial life skills such as how to light a cigarette.

But for God’s sake, don’t get near the exotic fur of the Pooff-mobile with that thing.