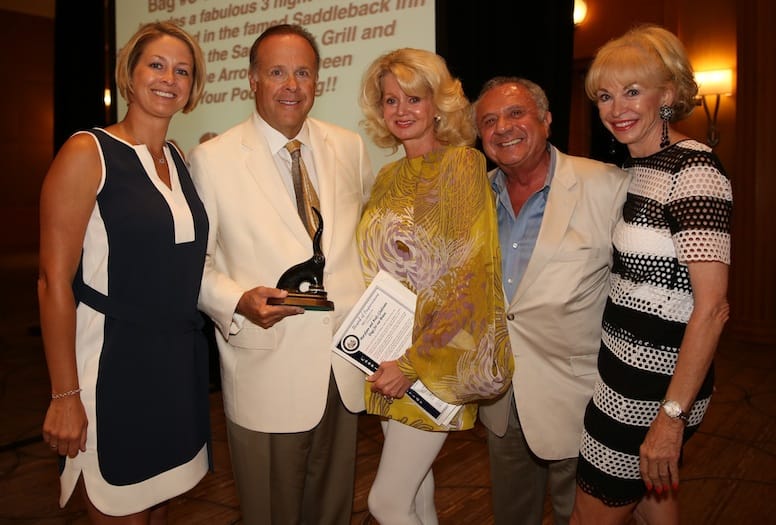 (From left) Sara, Andy and Marylynn Gladstein, who were honored for their organization, Dogs for our Brave, with Dick Shalhoub and Jan Ray at the Pets on Parade luncheon.
Photos by Pat Krause/Video by Tim Tracy

The Pets On Parade luncheon, presented by Pegasus Therapeutic Riding and Loving All Animals, put another exclamation point on the summer with its 17th edition on July 18 at the Renaissance Esmeralda Resort in Indian Wells.

Also recognized were Janet McAfee and Marylynn and Andy Gladstein. McAfee was honored with the Circle of Life Award for her efforts to rescue animals from public shelters prior to euthanasia, abusive homes, in distress or lost on the streets. The Gladsteins received the Hallmark Award after creating Dogs for our Brave, which rescues and trains shelter dogs, and provides them as therapy dogs to military veterans.

Kudos to auction chairs Alicia Gomez and Rene Perla for the myriad of items on display throughout the edges of the room. Rancho Mirage mayor Dana Hobart was in attendance with his wife Vicki, and so was Palm Desert mayor Susan Marie Weber. Lindi Biggi with her dog, Hopalong Cassidy, and Dog mascot in costume. Bianca Rae and her dog.