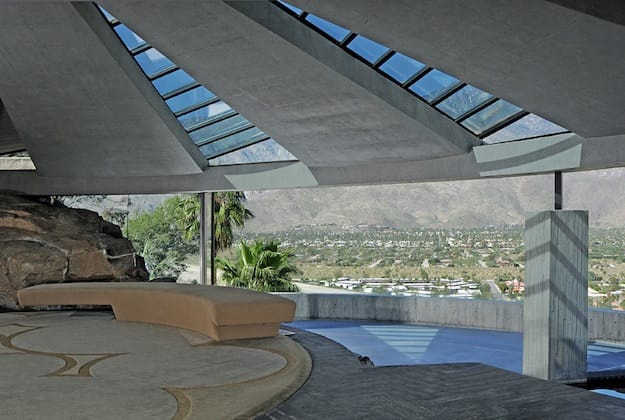 Palm Springs has long been called the “Mecca of Modernism” for its wide array of architectural works from the mid-1940s to the mid-1970s.

While larger cities have a greater quantity of era buildings, the concentration of unique examples here is unrivaled. In the mid-century boom, the Coachella Valley needed every type of building – homes, schools, civic and commercial buildings, religious buildings, museums, post offices, gas stations – everything but high rises and bridges.

Even before modernism, our beguiling desert nurtured and inspired architects. In fact, some of the most renown has contributed to the environment that impacts everyone daily.

Fifteen years before Palm Springs’ incorporation, Lloyd Wright, son of Frank Lloyd Wright, designed The Oasis Hotel. Near the corner of Palm Canyon Drive and Tahquitz Canyon Way, its shops and observation tower are all that remain of the gracious 1923 six-acre resort.

Replete with advanced building methods for which Wright became known, its “slip-form” construction is still evident…a system where horizontal layers of concrete are created within wooden forms and “slipped up” layer by layer to form walls.

In 1925, San Francisco architect Gordon Kaufmann designed the La Quinta Resort in a then isolated corner of the Valley. Kaufmann’s further accomplishments include Beverly Hills Greystone Mansion (1928), Hoover Dam, and The Los Angeles Times Building (both 1935).

About the same time, Austrian-American architect Rudolf M. Schindler designed the Popenoe Cabin (since demolished) in what would later be called Palm Desert. Not far from there and extant, Schindler’s 1947 Toole Residence has been protected by the impeccable stewardship of only two owners since then. Schindler’s residence in West Hollywood is open to the public (www.makcenter.org).

Few mid-century architects are as eminent as John Lautner or Richard Neutra. Their diverse approaches to architecture define a spectrum of modernism spanning the natural, organic lessons of Frank Lloyd Wright to the unadorned, industrial materials and philosophies of the Bauhaus.

Today, their six Coachella Valley commissions are among the world’s most visited architectural sites. Lautner’s 1968 Elrod House and Bob Hope House (1978) incorporate his characteristic drama and extraordinary engineering feats. The 1947 Desert Hot Springs Motel (now Hotel Lautner; www.hotellautner.com) was his first venture into concrete, a material for which Lautner is celebrated.

In Palm Springs, Neutra’s Grace Miller House (1937) and Kaufmann House (1946) have been cultural tourism destinations for decades. In 2002, however, Neutra’s Maslon Residence at Tamarisk Country Club (1962) was insensitively demolished, causing an international outcry.

The distinguished roster of mid-century architectural icons with works in our back yards include Welton Becket, Victor Gruen, Craig Ellwood, William Perriera, Charles Luckman, and A. Quincy Jones. And that’s just a few, so let’s save them for another architectural journey.

See you next time on the Modern Road…