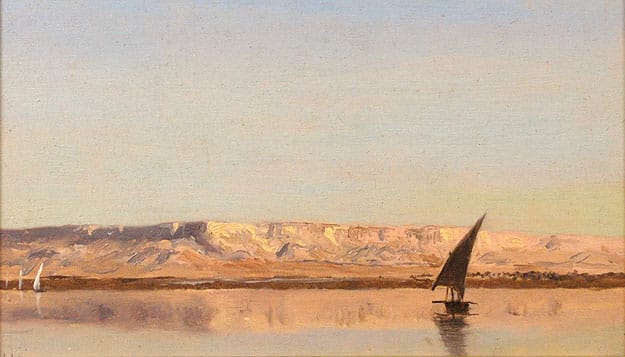 A well-dressed painter on horseback ambled out across the Palm Springs sand in 1904. He set up his easel near the train station under a quarter moon and fixed his gaze on an anonymous stretch of scrub. With a palette of only a few colors, he laid on rough stripes of sky and sand.

Today, more than 100 years later, viewers can see the results of this night ride at Palm Springs Art Museum, which is exhibiting a recently discovered cache of plein air oil sketches in Night and Day: The Paintings of Lockwood de Forest, opening Dec. 17. In this season of Getty-inspired Pacific Standard Time frenzy, the biggest find locally may be an old-fashioned Hudson River School artist transplanted to the Southern California desert.

Santa Barbara art dealer Frank Goss, owner of Sullivan Goss Gallery, had sold an occasional de Forest painting over the years (the painter lived in Santa Barbara from 1915 until his death in 1932), but he was unprepared for the bounty when family members recently divested their collections. (Goss co-curates the Palm Springs show with museum curator Christine Giles.) What the relatives brought in was a major, coherent body of work, including more than 400 night scenes, along with a selection of early Santa Barbara paintings and a trove of desert landscapes.

Goss says the artist was aiming for “common views of the most simple and elegant things in life.”

De Forest grew up in a wealthy family in New York and was linked to the formidable Hudson River School via his cousin and mentor, Frederick Edwin Church. He worked in a design firm (Louis Comfort Tiffany was his business partner) and was an accomplished painter by his 20s, when he was awarded membership in the prestigious National Academy.

He traveled restlessly, painting in China, Mexico, Greece, Korea, and Alaska. He found his artistic revelation in the deserts of the Middle East in 1872 — an awakening that prefigured his fascination with Palm Springs. “I like the landscape better than anything I had ever seen,” he wrote to an artist friend.

Looking for the feeling he found in Egypt, he came to Palm Springs for the first time in 1904 and kept returning to the small village for 20 years. Some say his desert paintings are his best work. They are some of the earliest views of Palm Springs to be submitted to the National Academy and shown in East Coast venues.

Goss recently made a trip to Palm Springs to visit the places de Forest painted. He and Giles journeyed to the Salton Sea, Indio, and Windy Point, trying to match century-old paintings with modern-day locales. It wasn’t always easy, because
de Forest deliberately shunned landmarks such as Mt. San Jacinto and Tahquitz Canyon. He was going for the big empty. When a landmark does appear, it’s only the corner of a hill.

Though he was trained in the Hudson River School, known for capturing lush details of the natural world, de Forest’s style is minimalist. “He became sort of an anti-detailist,” Goss says. He kept subtracting elements, reducing and reducing until he came to the bedrock.

De Forest was slowly going deaf during his Palm Springs years, which may have intensified his feeling for the desert’s solitude, Goss says. When you see the exhibition, Giles suggests, “Compare his early paintings of the Middle Eastern desert with his later paintings of the Palm Springs area. Look for his limited palette, yet how light radiates from the canvas in both his daylight desertscapes and his darker moonscapes. He was relentless in his desire to capture the subtleties of light and atmosphere.”

After absorbing de Forest’s paintings, your eye naturally travels to the desert’s open places, looking not for impressive landmarks, but for the beauty of absence and the nothingness the painter sought.