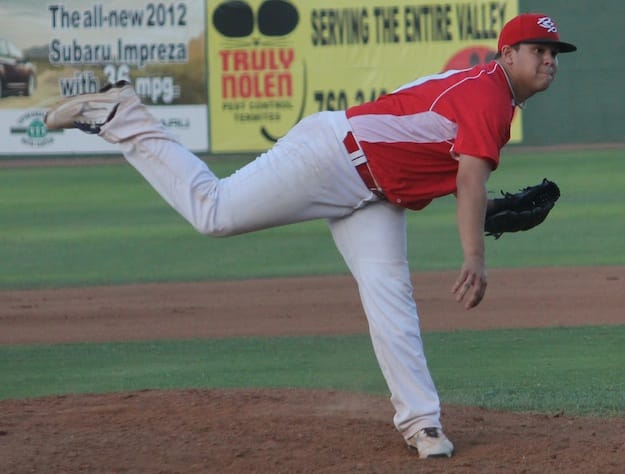 Palm Desert native Keaton Hernandez is ready for the demands of Division I college baseball. But he'll need a recharged summer with the Palm Springs Power to help prime him for the challenge.

To observe some local Power flavor this summer, take in a starting performance from Hernandez. While injuries abbreviated his 2012 campaign with the Power and would pause his second season of junior college ball at Northeastern Oklahoma A&M, the 2010 graduate of Desert Chapel in Palm Springs nonetheless earned an athletic scholarship to Dallas Baptist University for the ensuing autumn.

"This summer is my chance to feel comfortable going into Division I baseball," says Hernandez, 20, who is 3-0 after throwing five innings, allowing only two hits while striking out five in a 2-0 victory over the OC Waves on June 23. "I'm hungry to pitch. In Division I, there will be guys behind me that want my scholarship. So this summer I'll be throwing against D-I competition and really working to get better."

Under Team President Andrew Starke, the Power have become an annual summer breeding ground for local stars like Hernandez, along with some of the top Division 1 college baseball talent from around the country.

A Power fan since childhood, Hernandez sees the summer season as an opportunity to refine his mound presence and polish grip and release. The pitcher further recognizes that the team atmosphere is one of serious baseball focus and not a summer vacation.

"Starke is huge about winning," says the a 6-foot-1, 210 pound Hernandez. "Last year, I remember not knowing what to expect and he came in the locker room and was like, 'You guys gotta win!'  It's almost hilarious how competitive he is.  And I just knew that I could pitch for this guy every day."

The demanding summer schedule is not without off-field education for Power players. Communal outreach buoys the intensive slate.

"We learn how to communicate with a lot of different people and I think that will help me," Hernandez adds.  "And Starke brings over a lot of little leaguers to the park and I think that the parents see the team encouraging these kids. I think Power baseball is bringing this community together; we really have a lot of guys on this team who can be an example for kids of what to do and what not to do on the ball field."

The Power appear primed to meet or exceed last summer’s record-setting 42-win campaign, a defense of their So-Cal Collegiate Baseball League championship and a crown-grabbing performance in the inaugural So-Cal World Series.

A host of promotions and Sundays giveaways compliment the on-field product.  Two for Tuesdays mark 2-for-1 tickets with $2 drafts, hot dogs and soda while $1 Beer Fridays offer an incomparable cost for domestic drafts. Come July 4, don't miss one of the desert's finest firework displays, where fans take to the field post-game for an impressive array of blasts to match the diamond product.

For more on the Power season schedule, promotions and players, step to the plate at www.palmspringspowerbaseball.com