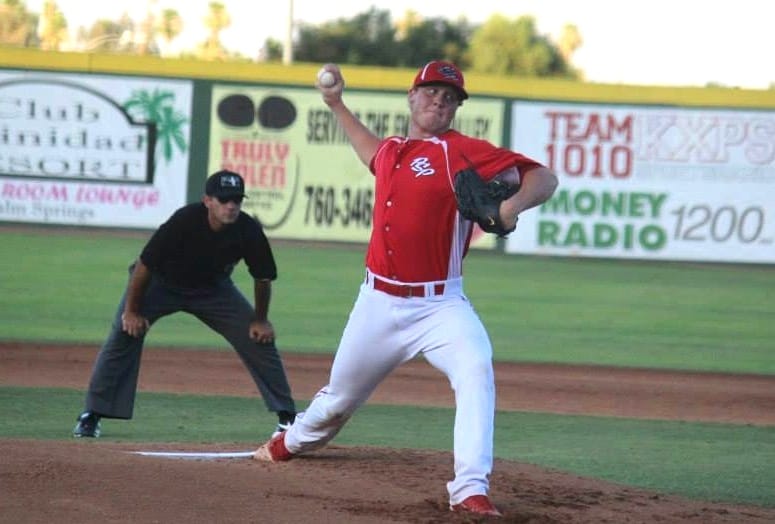 When the Palm Springs Power opens its season May 30, the club begins a journey to defend its back-to-back So Cal World Series titles while concurrently seeking a fourth straight claim to the Southern California Collegiate Baseball League crown.

But for one local product, the campaign is as much about closings as openings.

Bermuda Dunes native Doug Finley enters his third summer with the Power.  Coming off a two-win, four-save collegiate junior season for Colorado State University-Pueblo, Finley is in line to claim the closer's role for a Power club coming off a franchise best, 46-win season.

"I challenge batters with my fastball and try to pound the zone; especially up in the zone," says Finley, who posted a 2.97 ERA while striking out 46 batsmen in 30.1 innings last summer.  "My velocity is anywhere from 88 to 92 miles per hour. I usually like to establish the fastball and when I can get my curve — my secondary pitch – over for strikes, then I'm a pretty tough pitcher to hit."

For  the 2010 Xavier College Prep graduate – who holds aspirations of pitching beyond his final season of college ball – playing for the Power has provided an opportunity to continually hone his skills. "Last summer I would say I kinda turned the corner as a pitcher," he says. "I really matured and I wanted to focus on not walking batters, attacking batters, and I really feel like I did a good job of that last season. And it's always good to come home and play in front of my friends and family."

And while he's proven inhospitable toward opposing batters, Finley revels in the chance to show new teammates valley life beyond the ballpark.

"I tell a lot of the guys when they get out here that they're gonna have one of the best summers of their lives," Finley says. "Being a local guy, I take out a lot of the guys that aren't from the desert; and its fun for me to show them my hometown.  It's great to being able to serve as an ambassador for the Palm Springs area."

Known for its gaudy win totals, the Power continue to complement victories with myriad in-game promotions.

"The Power do a great job of providing a fan-friendly experience," Finley describes. "People are always gonna say that it's hot out, but there are misters at the stadium and 'Dollar Beer Night' on Tuesdays. And then there's the 'Beer Batter,' where, if we strike out the last batter of an inning, then beers are $1 the next inning. And with all the on-field stuff the team does, it's a great atmosphere to come out with family and friends."

Additional promotions for the 2014 season include "Family Appreciation Wednesdays" offering $1 admission for any guest; "Giveaway Sundays" and "Fireworks Nights" on May 30 (Opening Day), July 4 (Independence Day) and July 18.