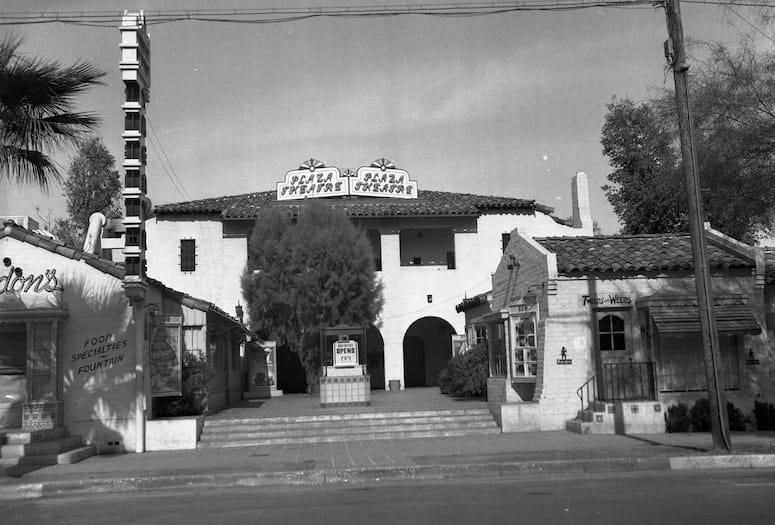 In January 1978, the groundwork was laid to create the Historic Site Preservation Board to protect buildings like the 1936 La Plaza Theatre.
PHOTOGRAPH COURTESY PALM SPRINGS HISTORICAL SOCIET

City Councilman Bill Foster proposed that a special committee be established to preserve local historical sites at a city council meeting in January of 1978.

His indignation stemmed from the demolition of the old ticket booth that had been part of the Plaza Theatre built in 1936. The demolition of the ticket booth was part of a remodeling project done by the owners of the Metropolitan Theaters group after they purchased both movie houses in downtown Palm Springs and divided the Plaza Theatre into two separate movie houses.

Foster said the destruction of the booth stimulated his desire to put into practice a process to preserve other potential historical sites before they were lost. “We (the city) have very few sites like this left, and if we don’t do something soon, there won’t be any left to save,” he said.

He suggested to the rest of the City Council that a special committee be set up to review building plans and determine if the sites have any historical significance before permits for demolition are granted.

It took Foster a couple of years to convince the rest of the city council members to support his idea. In 1981, the Historic Site Preservation Board was enacted as part of the city’s planning department. There were entrusted to identify, nominate and recommend potential historic sites and neighborhoods that they believe should be preserved to the City Council

There is a multitude of ways to Explore Palm Springs, which turns 81 in 2019. One of the more intriguing methods is by exploring Palm Springs history.