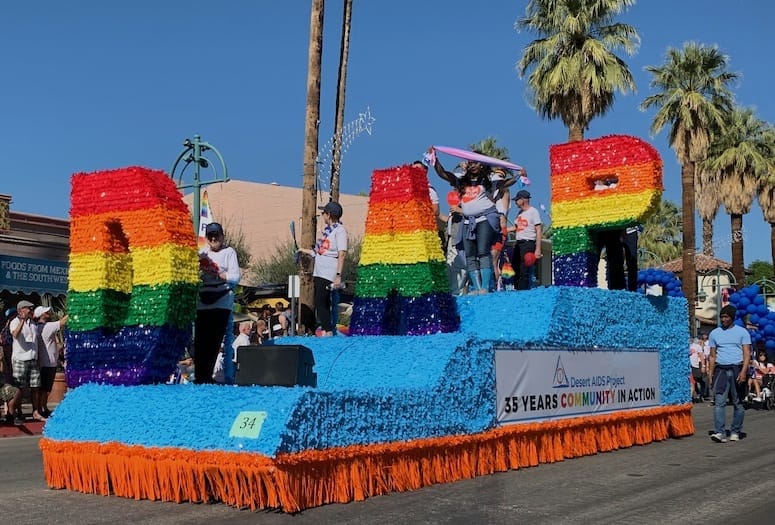 The Greater Palm Springs Pride parade has that hometown feel with a number of local organizations and businesses involved.
PHOTOGRAPH BY JIM POWERS

The Greater Palm Springs Pride parade will mark its return since 2019 on Nov. 7 with the first appearance by the San Francisco Dykes on Bikes Women's Motorcycle Contingent, who will roll down Palm Canyon Drive for the first time in its 45-year history.

In addition, parader-goers will view the presentation of 71 flags each representing a country where it's illegal to be an LGBTQ person, including large parts of Africa, Asia, and the Middle East, with a high intolerance of homosexuality. Being gay in Afghanistan, Brunei, Mauritania, Yemen, Nigeria, Sudan, Somalia, Saudi Arabia, and Iran is one of the most significant "crimes," and "offenders" face death. In countries where homosexuality is banned but not punished by death, "offenders" face being flogged or imprisoned. They are also stripped of their human and political rights and treated as third-class citizens.

"Our Pride Week calls on the community to gather and embrace our diversity, our resilience, and raise awareness of the collective power of the LGBTQ community," says Ron DeHarte, president of Greater Palm Springs Pride. "Parade participants help raise awareness of important issues, including immigration reform, racial justice, access to health care, violence against transgender members of our community, and mental health awareness. The Pride parade is an opportunity to gather in celebration and use the platform that Pride provides to peacefully resist hate, discrimination, intolerance, racism, and bigotry."

The parade steps off at 10 a.m. in the Uptown Design District on North Palm Canyon Drive at East Tachevah Drive and travels south to downtown ending at the entrance to the Pride Festival at Amado Road. The parade usually lasts two hours and is a free event.

The parade is known for the significant number of youth marching groups participating from the region's Gay-Straight Alliance (GSA) organizations. Up to 500 students representing 56 GSAs are expected to march and represent their school.