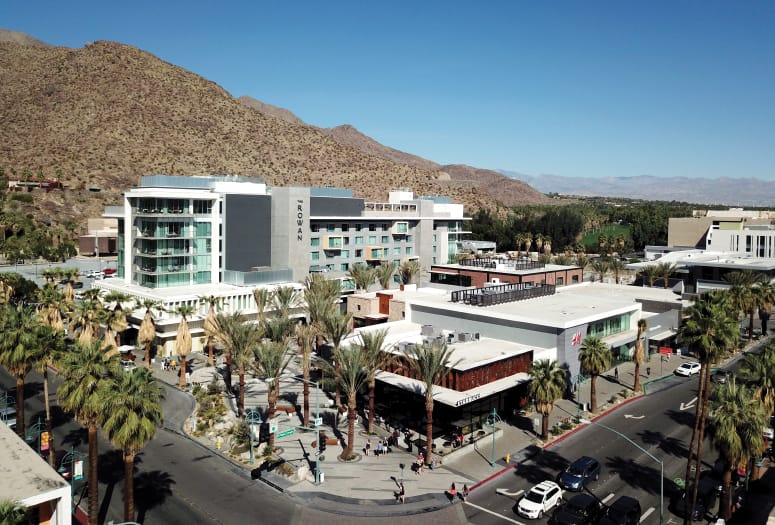 If you stand at the intersection of Tahquitz Canyon Way and Palm Canyon Drive, you are smack-dab in the heart of Palm Springs’ thriving downtown.

Turn toward the mountains, and there’s the Kimpton Rowan hotel with its rooftop 4 Saints restaurant that offers unparalleled views of the city and mountains, and Starbucks Reserve shop that draws passersby in to sip, relax, and people-watch. There is also Tommy Bahama’s Marlin Bar, MAC Cosmetics, H&M, Kiehl’s Skincare, Johnny Was women’s apparel, and West Elm. Still to come are the Virgin Hotel and Il Corso Italian restaurant.

With the Virgin Hotel slated to open in 2022, developer Michael Braun and his team at Grit Development are working to bring in more shops to the project, like candy store Lolli & Pops.

• See related story: What You Should  Know About Indian Wells.

“The new hotels, retail, and restaurants add a new demographic to the mix we are seeing.”

The “Babies” may have caused a stir before being placed, but they now have admirers, said Braun. With the coming Downtown Park and the open walking spaces between the shops, Braun plans on adding more public art exhibitions. “It gives people something to look at and talk about,” he said. 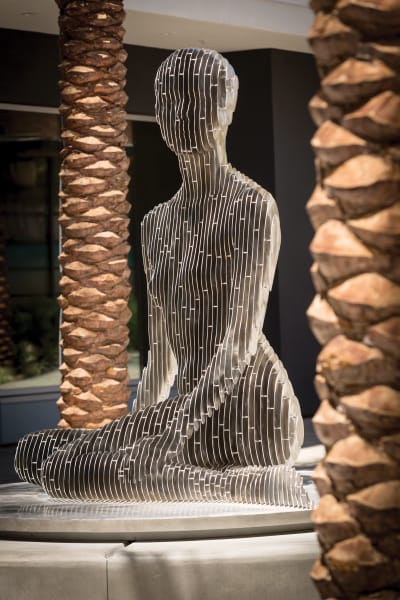 One of the public art exhibitions, Isabelle, a polished stainless steel sculpture by Julian Voss-Andreae.

The Cultural Center, like Downtown Palm Springs, will be an incredible destination for the city, said Kate Anderson, director of public relations for the Agua Caliente Band of Cahuilla Indians. The site will include a museum where artifacts such as Cahuilla baskets and ollas will be displayed; a research library; and space for traveling exhibitions, such as those from the Smithsonian’s National Museum of the American Indian. There will also be a walking path that has been designed to resemble trails from the Indian Canyons and a new bathhouse and spa, the fifth to be built on the site, where the tribe will share their 12,000-year-old healing mineral waters, as they have for almost 140 years.

With all the new events, hotels, and restaurants such as Grand Central Palm Springs, Haûs of Poké, Brickworks, Truss & Twine, Mod Café, Juniper Table at the Rowan, and Sandfish, Palm Springs has become a year-round experience for visitors of all ages, from millennials to baby boomers and everyone in between, said Mary Jo Ginther, director of tourism for the city of Palm Springs. “We do exceedingly well,” she said, citing the city’s Transient Occupancy Tax (TOT) increase over the past decade. TOT for 2018 is projected to be $32 million an impressive amount, considering that TOT for 2009 was a meager $11 million, “That doesn’t include sales tax,” she adds.

Long-established restaurants, souvenir and clothing stores, and local attractions such as the Palm Springs Aerial Tramway are all flourishing, and it shows in collected sales tax. “Visitors account for nearly 75 percent of sales tax for the city,” Ginther said. Taxes collected from Measure J have funded street and infrastructure improvements around the city.

There are more conventions and events coming into the Palm Springs Convention Center, including two upcoming conventions, Wanderlust’s “Well Spring” Festival in October and the Neighborhoods USA “Opening Doors to the Future” conference in March 2019.

The city’s full calendar of events, from ComicCon in August, Modernism Week Fall Preview  in October, the Palm Springs International Film Festival in January to  Modernism Week in February, White Party and Dinah Shore Weekend in mid-spring along with the Palm Springs International ShortFest in June, all bring in different audiences to the city — from baby boomers and snowbirds to millennials and film buffs. Add in Splash House in June and August, and anyone interested in emerging music has a reason to come to Palm Springs.

Renovating and rebranding hotels in the city was essential to attracting more visitors, Ginther said. Major hotels such as the Wyndham Palm Springs (now the Renaissance), Howard Johnson (ACE Hotel and Swim Club), Ramada Inn (Saguaro), and the old Palm Springs Riviera all took the city up on its incentives to upgrade. Boutique properties like the L’Horizon Hotel and Spa, Sparrows Lodge, Avalon, Holiday House, Colt’s Lodge, and others renovated to appeal to more savvy guests. Not to mention, a much anticipated new Andaz by Hyatt is slated to open soon, while the Dream Hotel and Resort is under construction across from the Palm Springs Convention Center.

• See related story: What You Should  Know About La Quinta.

There is another audience getting a sneak peek at housing with former Wisconsinites Eric and Lindsey Bennett’s hit HGTV series Desert Flippers, now in third season. The couple said there is something about the amazing cachet of the sunny Palm Springs lifestyle that interests their TV audience.

In addition to completing a home renovation in each episode, the show often films iconic locations in Palm Springs and includes a bit of life in the desert. “They see us working in shirtsleeves in winter and then they come here to escape to our 350 days of sunshine,” Lindsey said. “Palm Springs is a mecca for midcentury modern design and architecture. We work with local vendors and our audience will reach out to them, and that all creates incredible buzz about the city.” 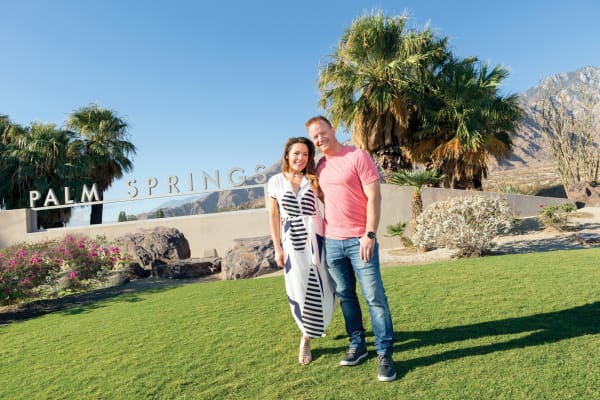 “Palm Springs real estate is booming right now,” adds Eric. “Everyone wants midcentury modern, and we are thrilled to showcase the city’s amazing beauty, vibrancy, and architecture on national television. It’s a unique resort destination that truly is like no place else.”

Getting to Palm Springs is easier with expansions at the Palm Springs International Airport, including expanded ticketing and vehicle rental areas, TSA screening area, and other amenities. There are more planes coming into Palm Springs including seasonal flights by United from Newark, Air Canada from Calgary, and Delta to and from Atlanta. “It’s a difference from when the city had to pay airlines to fly into the city during the summer months,” Ready said.

Moving on, Ready notes that the next big project for Downtown Palm Springs is the 1.4-acre Downtown Park. The cost of the park is slated at $6 million, paid for with Measure J. The park will feature walking paths, shaded areas to sit and relax, water features, and an amphitheater. “The walking paths are designed to resemble the Indian Canyons,” Ready said.

• See related story: What You Should Know About Rancho Mirage.

Palm Springs is unique in the different segments of tourist, who come here, from cultural buffs who come for the museums, film festivals, and special events to food and wine lovers who come for the city’s eclectic nightlife and ultra-cool eateries — or the LGBTQ community who appreciate the city’s diversity and welcoming vibe thanks to popular events like the Gay Pride Parade, along with White Party and Dinah Shore Weekend.

“It’s the maturation of our city,” Ready said of visitors, who come to town to enjoy the Coachella Valley’s premier city and up their cultural quotient.

“In Palm Springs, we have it all and we welcome everyone,” said Ready. 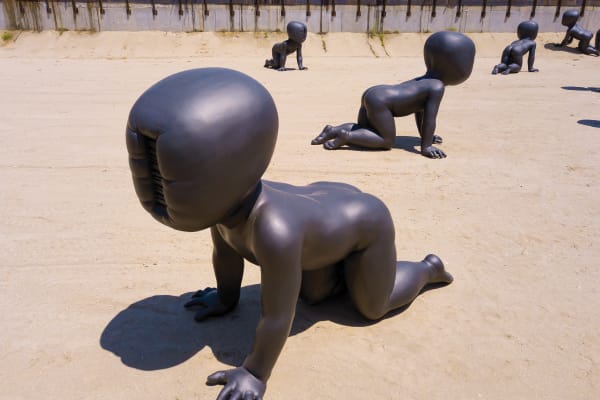