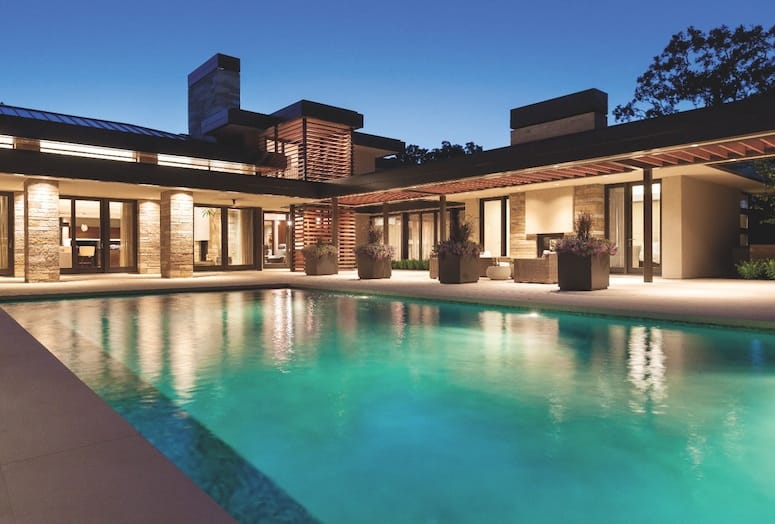 A layered composition of overlapping vertical and horizontal forms in warm woods and local stones blend together in this Tulsa home.
Photo by Paul Crosby

When architect Charles R. Stinson talks about his work, his words tumble in spirited landslides and his tempered voice rises and falls like waves gently rolling onto a sandy beach. His connection to Earth colors almost every thought uttered during our phone interview, and his philosophy of creating organic, humane homes that harmonize rather than compete with nature resonates deeply with preservationists.

For more than 30 years — long before it became fashionable — Stinson and his firm, Charles R. Stinson Architecture + Design, have practiced environmentally synergistic architecture. “It’s almost like there are the branches and leaves of a tree, and you’re living in the spaces in between,” Stinson explains. “It’s a balance between creating shelter and allowing the spirit to soar.”

The homes that Stinson modestly refers to as “shelter” are exquisite and embody a modern aesthetic that deftly weaves intimacy with grandeur, warmth with functionality. His work employs sleek lines, with vertical and horizontal planes that meld seamlessly with their environment, and a generous expanse of glass that maximizes light and a connection to the outdoors.

“Every time we work on a project, we listen to the site and we feel the space,” Stinson says. “The architecture we do is modern, but we are known more for using natural materials — stone and the wood — in the scale and flow, as well as new technology.” Stinson’s homes incorporate the most sophisticated methods of harnessing Earth’s renewable resources, including photovoltaic solar and geothermal energy.

Stinson’s obvious soft spot for the planet, from great mountains to a single blade of glass, is as organic as his designs. He grew up in a small Minnesota town, camping, skirting bluffs, and swimming to sandbars that emerged turtlelike in the nearby river. “I loved it,” he says. “People weren’t spending time inside watching TV, but outside climbing and doing things.” Eventually, he embraced architecture as his art of choice and incorporated into his designs the rocks, limestone, and woods he loved as a youth.

Stinson nurtured a predilection for his future profession as early as high school with full support from his family, who had recognized his inherent artistry and inventiveness when Stinson was only a toddler. Colored pencils and a drawing board pre-empted Looney Tunes on TV, and instead of Legos, Stinson used white plaster blocks and plastic green roof planes to build whimsical structures. “I never liked conventional Lincoln Logs or Erector sets; they were all too confining,” he remembers. “But I loved those blocks and flying horizontal planes.”

Drawn to art and architecture in college, Stinson found the latter a better fit. “Architecture is a balance of creativity, science, and technology,” he says. “It brought everything together, and I felt that it would give me limits to be creative within.”

Stinson began his practice in Florida where he absorbed and mastered the fundamentals of indoor/outdoor living. This understanding of how to invite light inside and honor the outside environment while providing elegant shelter came to define Stinson’s work and sculpt his reputation as one of the most sought-after architects.

Although Stinson has undertaken many commercial projects, such as a five-story lobby with a five-story water wall in a Saudi Arabian high-rise, his heart is in residential design. “Since the beginning, I’ve been interested in a more organic, natural architecture,” he says. “I started my career doing larger scale projects, but I made a conscious decision to focus on residential. It’s more expressive, more connected, and the clients are more committed — it’s really an extension of them.”

Stinson’s refined architectural expertise has taken him and his firm all around the world, from Germany’s Black Forest to the fabled tropical beaches of Costa Rica to the arid, sand-swept metropolis of Dubai. In the U.S., he has constructed or is in construction on dream homes from Hawaii to Florida. Recent work in Arizona inspired Stinson to access the architectural possibilities within a desert landscape.

“There is so much more freedom,” he explains. “I love the light in the desert, but you have to control it. You have to be thoughtful of the sun and the heat and how the architecture forms with the desert environment, but otherwise it’s very freeing and a lot of fun for us.”

Stinson hopes to bring his distinctive brand of architecture to the modernism mecca of Palm Springs and the Coachella Valley. He and his wife, Carol, have spent several winters in the desert, after Carol cajoled Stinson into a visit about 10 years ago. She had attended a Palm Springs retreat with their son during a pre-Modernism Week event and fell in love with the area, says Stinson. “She said, ‘You’re going to love the airport and old Palm Springs. Just sitting outside in downtown, I feel something. You’ve got to come out here.’

“There’s an appreciation for architecture in the Coachella Valley that I haven’t felt anywhere else,” Stinson says. “I feel more of an architecural connection here than any place I’ve ever gone, with the influence of the midcentury modern and the new modern.”

As of yet, there are no projects in the works locally — at least none that Stinson can presently disclose. “I’m working toward that quietly,” he says with an audible grin. “And I can’t wait.”