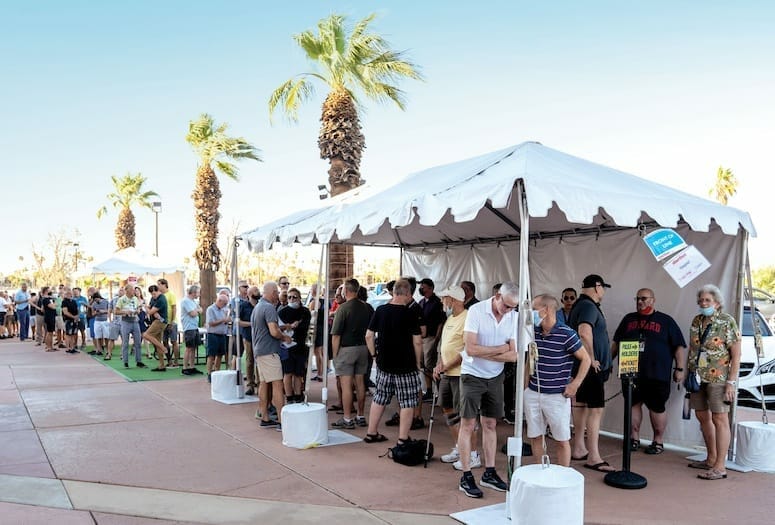 “There are no rules in short films,” declares Sudeep Sharma, interim artistic director and director of programming at Palm Springs International ShortFest 2022. “To create emotions and connections in 10 to 15 minutes — that’s really difficult to do.”

Sharma and the five other members of the ShortFest 2022 programming team sift through thousands of submissions annually to select the shorts that comprise the multigenre lineup. Shorts that make the cut fit two criteria: They clock in under 40 minutes, and they use that time to shift the viewer’s way of seeing the world.

Because they’re often created by early-career filmmakers and feature primarily emerging actors, shorts, in particular, make their mark through a “freshness of voice [and] uniqueness of perspective,” Sharma explains. ShortFest 2022 cultivates that cutting-edge outlook through an open submission process — anyone, from anywhere in the world, can offer a film for consideration via the festival’s digital portal.

The result is a vibrant, compelling roundup of stories and a ShortFest 2022 with a friendly, camplike feel. Rather than focusing on length or genre, Sharma and his fellow ShortFest 2022 programmers group films by theme, encouraging attendees to trace the ties between the shorts. He hopes viewers find links between themselves and the folks on-screen, as well: “It’s kind of amazing to see, ‘Oh, I’m completely immersed in this world,’ ” he reflects, “ ‘and I’ve been watching for three minutes.’ ” psfilmfest.org

Sex & The Drag: Through June 5

Actress and playwright Mae West served a 10-day prison sentence for obscenity after members of New York’s law enforcement watched her provocative dramedy Sex. See the 1926 play along with The Drag in this double feature at Desert Rose Playhouse in Palm Springs. desertroseplayhouse.org

Homage to Collage: Through June 26

The Artists Council celebrates the full spectrum of collage techniques, including other mixed media applications, with a show and sale at Artists Center at The Galen in Palm Desert. Admission is free Wednesdays through Sundays, 10 a.m. to 4 p.m. artistscouncil.com

Gonzalo Lebrija: Miracle of the Eternal Present: Through Oct. 2

View two decades’ worth of photos, videos, sculptures, and paintings by Mexican artist Gonzalo Lebrija at Palm Springs Art Museum. Lebrija often tilts the perspective on ordinary objects, as with his sculpture History of suspended time (A monument for the impossible), which turns a 1968 Chevy Malibu on its nose. psmuseum.org

Palm Springs Art Museum exhibits joyful drawings, textiles, wallpapers, and other creations from the mind of Jacqueline Groag, a British designer who catered to the post-Word War II hunger for fun and vibrant clothing and housewares. psmuseum.org

Do the “Lido Shuffle” down to Fantasy Springs Resort Casino in Indio for singer-songwriter and guitarist Boz Scaggs’ Out of the Blues tour. fantasyspringsresort.com

Sun Volt’s folk-rock sound has shaped the alt-country genre since the mid-’90s. Catch them at Pappy & Harriet’s. pappyandharriets.com

Vicki Lawrence originated many roles on The Carol Burnett Show but is most recognizable as Mama, a character that earned her a spinoff series. See her at Agua Caliente Resort Casino Spa in Rancho Mirage.

Your troubles will float away as you frolic around Pappy & Harriet’s and dance to the bright and happy sounds of Scottish indie-pop band Belle & Sebastian. pappyandharriets.com

Sunday afternoons, enjoy classic and contemporary jokes alongside songs and monologues that look at the funny side of life at Desert Theatreworks in Indio. dtworks.org

This tribute performance at Agua Caliente Resort Casino Spa fêtes the band that picked up where The Beatles left off with hits such as “Mr. Blue Sky” and “Evil Woman.” aguacalientecasinos.com

You know him and love him on Whose Line Is It Anyway? and game shows including Let’s Make a Deal. Now see the multitalent at Spotlight 29 Casino in Coachella. spotlight29.com

The duo who met on the set of the 1986 film Three Amigos and most recently starred alongside Selena Gomez in the Hulu series Only Murders in the Building roast each other at Agua Caliente Resort Casino Spa. aguacalientecasinos.com

Ohio-born comedian Tom Segura is well-known for his Netflix specials and podcasts. Catch his set at Spotlight 29 Casino in Coachella. spotlight29.com

Desert Rose Playhouse in Palm Springs presents a story about three Midwest sisters who seize the future in a hilarious but touching story that will linger long after the curtain has descended. desertroseplayouse.org

Swim, bike, and run your way to the finish at Big Bear Lake. The mountain town offers triathlon racing at 6,800 feet in elevation. bigbear.californiatriathlon.org

Re-creating the pomp of the final 1994 Pink Floyd tour, this tribute performance includes a multimillion-dollar light show, inflatables, and plenty of theatrics. aguacalientecasinos.com

Spotlight 29 Casino features this California native who has earned two Grammy Awards for his take on regional Mexican music. spotlight29.com

Rock out to angsty early-aughts jams like “Blurry” and “She Hates Me” at Fantasy Springs Resort Casino with with your favorite post-grunge group in a free outdoor concert. fantasyspringsresort.com

Southern Culture on the Skids: June 28

Get ready to jam out at The Alibi in Palm Springs with these seasoned rockers who fuse elements of rockabilly, surf, and R&B. thealibipalmsprings.com

This pioneering gay rock band defied rock ’n’ roll norms in the ’90s when they let their freak flag fly with songs like “Dick of Death” and “Smells Like Queer Spirit.” Wave yours right along with them at The Alibi. thealibipalmsprings.com

• READ NEXT: Mexican Food: The Places We Recommend in Greater Palm Springs.