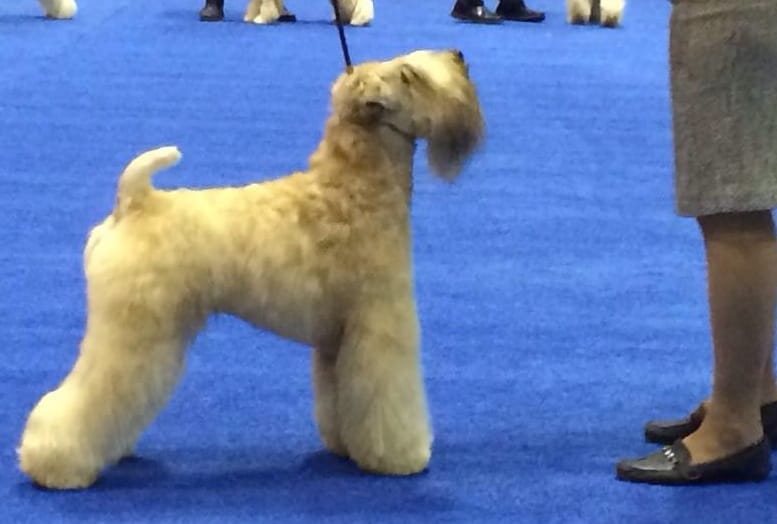 His champion dad, “Doc” was dead 15 years before Chip was born.

“Doc” has sired six litters of Soft Coated Wheaten Terriers since 1996, says Gay Dunlap of Indio, who has been a breeder for 40 years.

Chip, officially known as Grand Ch Lochlinear Gleanngay Cha Ching, turned out to be the only puppy in his litter.

“We were a little disappointed,” says Dunlap. “But then we thought that Chip had to be special.”

Chip is well on his way to becoming a champion. He just captured “Best of Breed” at the prestigious 2013 AKC/Eukanuba National Championship, Dec. 10-15, in Orlando.

“We were so excited because it’s pretty hard to do,” says owner Pat Mullin from Redwood City. “There are 28 Terrier breeds which makes it a highly competitive group.”

Chip will next appear at the Kennel Club of Palm Springs All Breed Dog Show, Jan. 2-5, at the Empire Polo Grounds in Indio.

They also have a great coat that doesn’t shed.

Mullin also has high expectations for Chip in Palm Springs.

“He is entered in all of the events, including the terrier pre-events on Thursday and Friday,” says Mullin. “We love Palm Springs because it’s warm in the wintertime and they have a beautiful venue.”

It’s not all about ribbons or prize money. In fact, entering dog shows costs money, says Dunlap, who is also a judge at the Kennel Club of Palm Springs.

“We do it to celebrate the sport of purebred dogs,” she says.

Mullin shows Chip in dog shows three out of four weekends each month.

“Chip took to the ring early on,” she says. “If he didn’t like to travel we wouldn’t show him.”

She credits Amy Rutherford for his winnings.

“She’s one of the top handlers in the country,” says Mullin. “Since we started working with her three months ago, Chip started winning.”