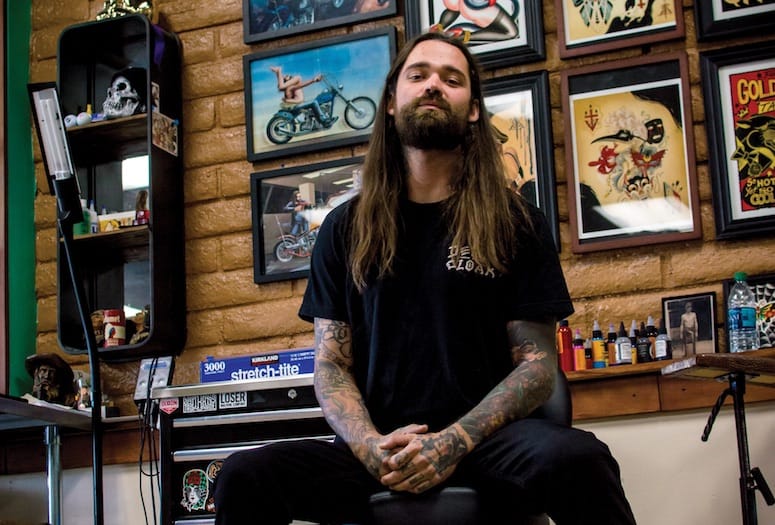 Cody Cowan knows a thing or two about pulling a clean line. But don’t call him an artist.

“I make tattoos,” he emphasizes, “and I want my tattoos to look like tattoos.”

Not trendy color splashes meant to mimic watercolor. Not photo-realistic panthers poised to pounce from the skin. His style is American traditional, through and through — think old-school sailor ink: bold black outlines with a minimalist palette and strategic pepper shading.

“You can see the evolution,” Cowan says of his work on longtime clients, whose bodies, like living pages from his portfolio, depict his progression in the craft.

“Each visit we talk about how I need to come in so he can go over my old tattoos,” says shop regular Chelsea Dorris, who scheduled her first session in 2011 and now has 19 Cowan originals. “I never do, because truth is, they still look great. He takes my vision into consideration and puts his skill into it and always delivers something better than I imagined.”

Cowan bought his first tattoo gun in 2004 after his 18th birthday. He’d been sketching in a tattoo style since childhood, inspired by an older generation inked with imagery symbolizing core values (a flower for love and growth, a swallow for freedom and flying home). After a trial run on his own thigh, he began doling out designs from his house.

With various positions at tattoo shops around the valley under his belt, Cowan has developed a strong following. So, with his high school buddy Wane Kan, he branched out and opened Iron Palm. Two years later, they still abide by a simple, sensible mantra: “If your body is a temple, decorate it well.”

“When I go out, I like Bootlegger Tiki in Palm Springs. It’s dark and super small, sort of like a speakeasy Tiki bar. My buddy Chad Austin runs the bar, makes up the [cocktail] menu. And if you’d rather have coffee, Ernest Coffee is right there, too.”