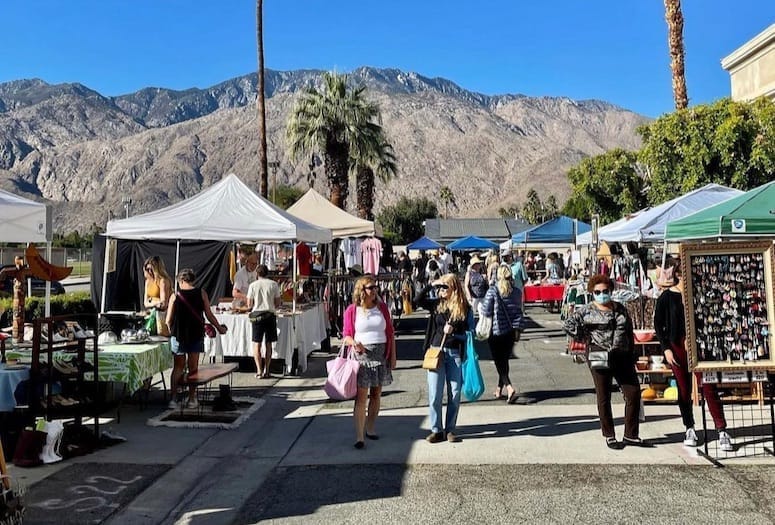 The Palm Springs Vintage Market has more than 100 vendors set up the first Sunday of the month, October through May. This month a second market will be held Feb. 20 during Modernism Week.
PHOTOGRAPH COURTESY PALM SPRINGS VINTAGE MARKET

When her Palm Springs antique store, Victoria’s Attic, closed shortly after the pandemic hit in 2020, owner Shelly Clark could have thought that was the end of the interaction with her customers.

What she found was her previous presence over the years at the monthly Vintage Market in Palm Springs made it possible for Clark to keep that connection and make it thrive going forward.

“The connections you make at the market truly help your business grow,” Clark says. “It isn't just a sale but a networking event in a way. You meet other dealers and you rely on people to share their experience to create even more business. It's just really fun, and it's neat to hear what they are planning to do with a piece or where it's going. And I think of my pieces like my kids, so I'm always happy when it goes to a good home.” 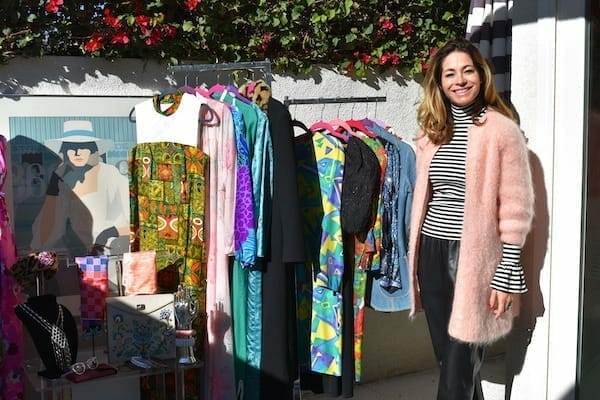 PHOTOGRAPH BY CARL SCHOEMIG
Shelly Clark was able to continue selling items at the Vintage Market after her Palm Springs antique business closed during the pandemic.

Clark has been selling vintage clothes for 11 years, and collecting vintage items for over 30 years. She happened upon the Palm Springs Vintage Market by accident when it was located on El Cielo across from the casino parking lot. “It was just fun visiting the market,” Clark recalls. “It's so eclectic and interesting. There have been all sorts of interesting people and all different styles. I always have been attracted to a broad range of vintage goods.”

Over time as the Vintage Market moved to the Palm Springs Cultural Center, Clark has noticed the recommendations she gives to newcomers have not. “People who are curious about the market should go there in the morning,” she recommends, “because all the good stuff will go fast. People should spend time to discover the whole market. There is always a chance to find that kind of unique treasure. Like so many things in life, sometimes it’s not the thing you thought you would get but grabs your attention.”

The Palm Springs Vintage Market is held the first Sunday of the month from 7 a.m. to 2 p.m. from October to May. This month, shoppers can visit twice: Feb. 6 and a second one on Feb. 20 during Modernism Week.

Palm Springs Life further spoke with Mindy King, who started the Vintage Market, and chats more about her inspiration and what visitors can expect to find when they visit. 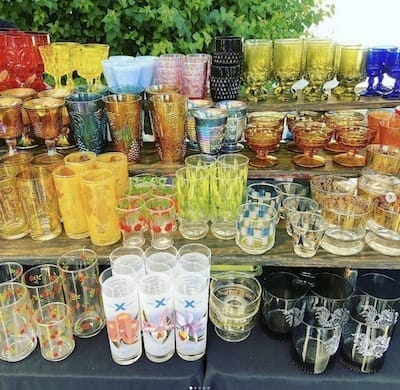 Where does your fascination with vintage and midcentury modern come from? Have you worked in the design industry?

No, never. I love the aspect of reusing items that are already out there in the universe. When I came to Palm Springs, I just fell in love with the midcentury modern architecture and design elements and made a lot of friends who were involved in this world.

What was your inspiration to start the Palm Springs Vintage Markets?

In happened during a summer that I spent up in Portland, where I live part-time. I did some thrifting in Portland and found a lot that I wanted to take to Palm Springs and sell it there.

Talking with a friend we had the idea of starting a market instead of selling at a market. That was in 2011 when the idea began. The market actually started across from the casino as a flea market. Eventually it morphed from a regular flea market to a vintage flea market.

What experience did you lean on to start something like this?

I've always been very good at organization and operations, and so I developed my own system to manage the business part of it. I spent a lot of time at other flea markets and talking to locals and also in L. A. and San Diego. Going to these events and talking to people, I was able to curate who I wanted in there and who didn't quite fit with the Palm Springs lifestyle. I really want the vendors to be successful. But at the same time, I like to keep it true to vintage.

Was it challenging at the beginning to attract vendors for your market? How many vendors did you have when you started and how many do you have now?

I think the first show we  had maybe 40 vendors, and recently we had 130. The market has really grown in popularity and we do have a lot of vendors who are waiting to get in. But like I said, we curate the market. 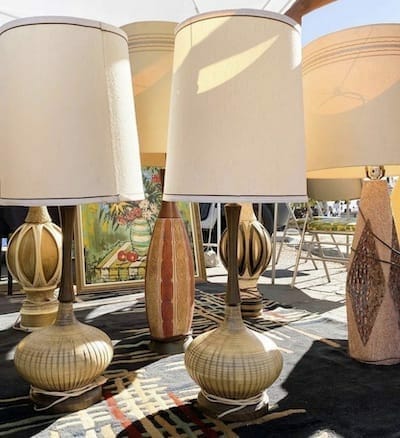 What can visitors expect when they go to one of your markets?

They can expect a wide variety of merchandise. It's not all strictly midcentury modern because I feel designers and people like a wide variety of things. We get a lot of decorators in there and they're an eclectic bunch.They can expect to see things from their childhood. They can see kitschy, retro, fun things that make them smile and have fond memories. There is music and food. It's become a real social event. I like to call it a boutique market because it's small compared to some of the other larger ones. People come, they stay, they eat, they hang out with friends, they can expect to have a good time, and maybe even pick up something to wear or a little decorative item.

There's a lot of art too, and pottery. When you see the furniture, some of it has been reupholstered and refilled, others are project pieces. Depending on how much, what your budget is and your timeframe, some people like do-it-yourself projects, and will buy a piece of furniture, take it home, refinish it, and then use it or sell it.

How long have you lived in Palm Springs? When did you move here and why?

I came in 2010 to buy a piece of real estate and flip it. I wanted to buy something and refurbish it. I had a partner at the time and we built this house and it was magnificent. We decided this is a great place to settle. We fell in love with the community and we decided to stay.

• READ NEXT: Temple Isaiah Stands Out as Architectural Marvel in Palm Springs.