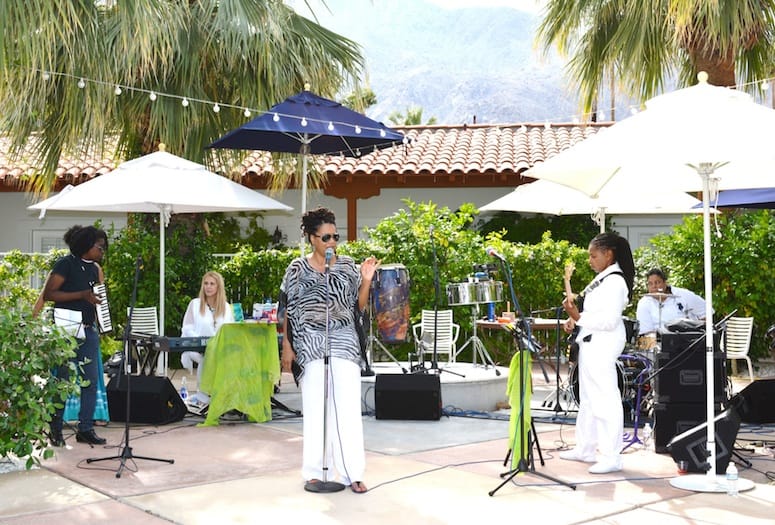 A few years ago, Gail Christian and her partner, Lucy Debardelaben, hosted a Jazz on Sunday brunch at the former Dink’s restaurant during Club Skirts Dinah Shore Weekend in Palm Springs.

The event sold out.

Feeling they had tapped into an opportunity for women to come together to celebrate music, they partnered with talented contemporary jazz artist Sweet Baby J’ai, to produce the inaugural Palm Springs Women’s Jazz Festival in 2013.

The event sold out… with approximately 1,000 tickets sold.

“This year we are hoping to sell close to 1500 tickets,” Christian says of the 2014 show, April 3-6 during Club Skirts Dinah Shore Weekend with venues including The Indian Canyon Resort, The Spa Hotel, and Escena Golf Club in Palm Springs.

“This is a fantastic opportunity to see amazing jazz artists,” Christian adds. “Jazz is a real American art form that should stay around and everyone should have access to jazz and women musicians. We even had a call from a woman from Calgary, Canada, who wanted a ticket. She had seen a post card about the jazz festival. Now that’s exciting.” Hitting a High Note
Christian and Debardelaben’s (pictured at right) overnight success is the hard-earned culmination of years of experience and dedication to promoting women’s concerts.
Christian, a retired newscaster, and Debardelaben, a finance professional, met in Washington, D.C., and have produced a myriad of musical events under L & G Events, such as the Michigan Women’s Festival.

After an argument about who would dig the car out of the snow, the duo decided to head west to California, Christian’s home state. The two currently reside in Palm Springs.

Initially, Christian and Debardelaben’s passion for cultural pursuits led them to explore organizing such a musical event. They both like jazz and thought an initial brunch would be fun.
“In California, culture can be as simple as having lunch,” Christian says. “We thought we would bring women together for an event showcasing female jazz musicians and bring them the audience they deserve.”

You won’t want to miss:

For tickets and information, visit www.pswomensjazzfestival.com