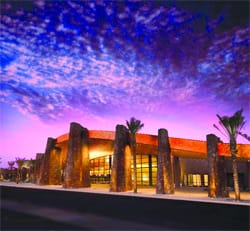 It’s not everyday that a development trend is supported by the Urban Land Institute, the American Institute of Architects, the Sierra Club, and the U.S. Environmental Protection Agency.

This trend is called mixed use, and it is beginning to take place in downtown Palm Springs. The Urban Land Institute and EPA call it smart growth and the Sierra Club describes it as cities that work for people with people-friendly streets.

Indian Canyon Drive restaurant owner Marvin Azzopardi, known for mixing a mean dough at Lotza Mozza, gets the concept and is an outspoken booster of mixed-use redevelopment trends in downtown Palm Springs.

Azzopardi has his eye on a penthouse aerie at The Palm Canyon mixed-use development within walking distance of his La Plaza eatery. He can barely wait until it is built in 2007 and has joined 90 others who have signed up on developer Brian Linnekens’ waiting list.

The Palm Canyon is a retail and recreational project slated for two-and-a-half acres at Palm Canyon Drive and Ramon Road.

It will have 32,420 square feet of retail, as well as street-level and subterranean parking. Linnekens’125 condos will have stunning mountain views and large private patios. Architectural setbacks will pull the project’s three stories away from Palm Canyon Drive, creating a more open feel for pedestrians.

Ground breakings next year for a number of mixed-use developments signal just one aspect of an exciting downtown Palm Springs renaissance, according to Raymond.

“All the pieces creating a new downtown synergy are in place,” says Raymond. “These mixed-use projects offer downtown living 24/7 and will attract people and give them every reason to stay downtown.”

Other new projects defining the new downtown are hotels complementing the city’s beautiful new convention center and adding fresh market appeal to the expanding downtown entertainment and cultural district, ranging from the Spa Casino neighborhood to Palm Canyon Drive and beyond to Museum Drive.

“Only people can bring the vibrancy that will attract great retail,” Mayor Ron Oden says. “When a dynamic, upscale year-around population is ensconced in downtown living, retail will take off.”

Upscale shoppers will patronize tonier stores and services than the present downtown can support, Oden explains.

Demand for new retail and downtown living is equally strong farther north where Lawrence Rael is developing another key mixed-use project at 414 N. Palm Canyon Drive. It will have 30,000 square feet of retail space and 120 gallery-loft condominiums. This new complex has signed retail leases and also has generated a residential waiting list.

nterested buyers are predominantly local, single upscale people who love our gorgeous courtyards and understand they will have downtown convenience with a traditional desert outdoor lifestyle … and for a tremendous value,” Rael reveals.

Acceptance by locals who work downtown is rewarding to Rael, who reports a high proportion of his retail space has been taken by businesses operating on the actual site or by nearby businesses that “want newer and better.”

“One thing is very clear about our new mixed-use projects, Rael states. “Redeveloping in an established downtown is a challenge that doesn’t happen without extra cost. You have to go up to make these projects pencil out.”

Another hot mixed-use complex planned near downtown is Mesquite Village, with its 11 acres of recreational features and 114 residences.

Families also will find a residential and shopping niche when Prime Urban and the Burnett Cos. transform an empty shopping center at Palm Canyon Way and Racquet Club Drive. The new retail/residential project, called The Art Colony, will offer multi-family homes stretching to Indian Canyon Drive to the east.

Reaching this point in development is only possible because of the many years of city and tribal cooperation and collaboration between the city and the Agua Caliente Band of Cahuilla Indians, Raymond emphasizes.

Todd Hooks is the tribe’s director of economic development. He helps oversee plans for Section 14 and other tribal lands.

“We are excited about the energy and opportunities in downtown Palm Springs,” says Hooks. “We support the new mixed-use development and new hotels on the horizon.”

The tribe, he explains, has always envisioned Section 14 as a sophisticated entertainment and cultural core for the city. The Spa Casino and Spa Resort Hotel are located in the heart of Section 14 near the convention center.
Soon the tribe will consolidate its administrative and planning operations in a new two-story building at Indian Oasis Corporate Park, located east of Gene Autry Trail on Dinah Shore Drive. This move will make room in Section 14 for the new Hard Rock Hotel.

The city’s Community Redevelopment Agency is working with the developers of the new Hard Rock Hotel, as well as a nearby Westin Hotel, to provide the additional 400 to 600 hotel rooms required by the city’s newly expanded convention center.

The Hard Rock will rise near the Spa Casino and Palm Springs Hilton. It will be the hip hotel for young sophisticates.

Hard Rock’s cachet and marketing is designed to rebrand what otherwise would be typical desert relaxation. Hard Rock peppers its Web sites with such high-octane words as “sex, hedonism, and rock and roll” and “Your place, your rules.”

Starwood’s Westin Hotel is the other new hotel expected to skew younger, affluent, and a tad edgier than traditional Palm Springs pillow palaces. Plans include a 75-seat screening room and recording studio.

Westin is a premier name in convention hotels and group meeting business. The Palm Springs version will be well suited for today’s contemporary urban travelers, with amenities for successful young business and vacationing travelers and those ageless boomers who follow the trends.

ooks says the old Canyon Hotel site in South Palm Springs is conducive to development as a condo hotel. The former hotel grounds sit on the western perimeter of the popular Indian Canyons Golf Resort opened by the Agua Caliente Development Authority for the 2005 season.

Indian Canyons Golf Resort has been a boon to premier downtown Palm Springs hotels whose upscale customers are delighted with the proximity of such a challenging course in one of the desert’s most beautiful natural settings. Golfers will support both the course and eventually a new hotel there, Hooks predicts.

Downtown already is known as the entertainment capital of the desert. Expanding downtown youth and boomer energy is bound to broaden this base.

The Fabulous Palm Springs Follies, within a 7-iron drive of Cirque Dreams on South Palm Canyon Drive, has completed 15 years as one of the biggest audience draws in the history of Riverside County entertainment.

Palm Springs Art Museum and all of downtown are anchored by the powerful San Jacinto Mountains. Overlooking its new Pavilion Theatre neighbor, the museum offers permanent and visiting art exhibitions, architectural appreciation programs, and entertainment in its Annenberg Theater.

A major tribal contribution to the future of downtown Palm Springs will be a 98,000-square-foot, interactive Agua Caliente Cultural Museum planned for Section 14. Ground is expected to be broken in 2008. Meanwhile, visitors can enjoy an interim Agua Caliente museum at the historic Village Green — home of the Palm Springs Historical Society and McCallum Adobe.

The city is becoming the museum core of Riverside County. The Palm Springs Air Museum on Gene Autry Trail attracts thousands of visitors every year, and a World Museum of Natural History is planned by La Sierra University for North Palm Canyon Drive.

While the downtown is moving toward vibrant 24/7 living, residents and visitors are finding more of everything they need in a fast-growing community.

A great example of new retail serving residential neighborhoods is Smoke Tree Commons set for East Palm Canyon Drive at Farrell Drive. Among other lifestyle tenants new to Palm Springs, the complex will introduce Linens-n-Things; Cost Plus; and the crafter’s mainstay, Michael’s.

Further validation of the city’s growing Ramon Road big-box retail power is The Springs Shopping Center, slated to open in late 2007 at Gene Autry Trail. Home Depot, Kohl’s, and others will join a neighborhood of thriving majors such as Lowe’s, Wal-Mart supercenter, PetSmart, and Office Depot.

The city’s posh retail auto area is about to grow as well. BMW will double in size next year at its East Palm Canyon Drive dealership near Palm Springs Infiniti, allowing Infiniti and Mercedes Benz dealerships to grow as well.

Palm Springs is experiencing many of the same powerful changes as its neighboring desert cities. Yet, Palm Springs retains its own character.