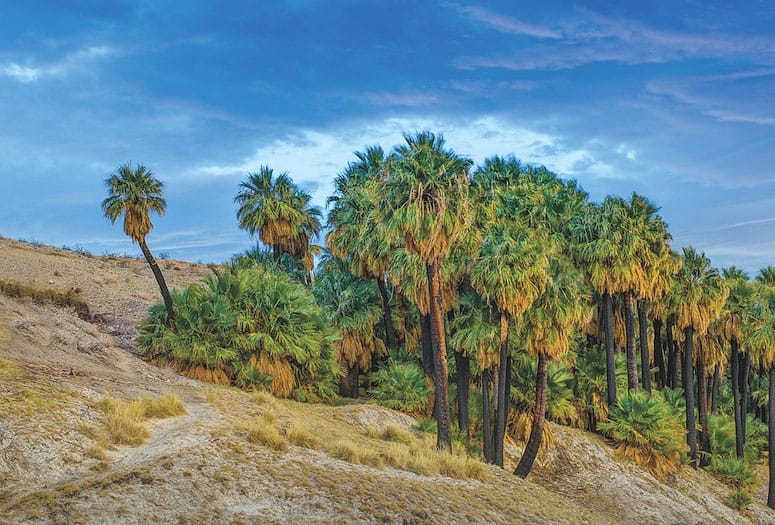 Willis Palms Oasis burned in 2011, but because of the fire–resistant nature of palms, the oasis has completely recovered.
PHOTOGRAPHs BY TOM BREWSTER

When I was a kid, the two palms gracing our scraggly front yard lent that patch of soil distinction. They made me feel as if I deserved to be called a Californian. Although many people in our neighborhood hailed from other locales, my folks, newly arrived from Ireland with their thick brogues and alien customs, were another story entirely. They didn’t join the PTA, didn’t know how to pack acceptable school lunches, didn’t do things the way other parents did, making me self-conscious and feeling like an interloper.

But those two trees … they were my bona fides, conferring upon my émigré family the mantle of native. We posed for birthday, First Communion, and graduation celebrations in front them, shipping the photos home to Ireland to boast of just how Californian and cosmopolitan we had become.

Turns out, those palms were every bit the immigrant, just as alien as my family and I. And thus began my fascination with palms. If I was an outsider, or, really a Californian by adoption, I wondered about these countless varieties of palms. Did any of them — any of us — truly belong?

Joan Didion once described the weather of Southern California as being  “of catastrophe, of apocalypse.” But for a small group of natives, Didion got it backward: The California fan palm actually thrives on disaster and, in fact, owes its existence to the region’s earthquakes and wildfires. Looking up through the skirts and palms at Thousand Palms Oasis Preserve.

Neither the palm trees of my childhood (a date palm of the genus Phoenix), nor the willowy ornamentals that tower along broad boulevards in Los Angeles was born here. The regal yet coy California fan palm is the genuine original, a plant that prefers to hang out with its peeps inside nearly hidden oases in Palm Springs, Joshua Tree, Indio, and Anza-Borrego than to be seen parading down main avenues, drawing attention to itself.

According to biologist James Cornett, evidence suggests that mammoths attempted to eat tops of the California fan palm, but were thwarted by spines at their exact “buffet counter” height.

This indigenous palm is impressive in its quiet way. Known in arborist circles as Washingtonia filifera (its genus name is an homage to our first president), it makes its home in the Santa Rosa and San Jacinto ravines that converge here, and the city of Palm Springs takes its name from the plant. Countless varieties of immigrants — non-native date and ornamental palms — have appeared in Palm Springs over the last century. The city developed its own characteristic palm paradise that draws visitors by the hundreds of thousands. But in the transformation from thirsty desert to man-made oasis, we may have lost touch with the splendor and idiosyncrasy of the region’s own. Like the girl next door whose beauty is overshadowed by a Hollywood starlet, the California fan palm patiently waits for us to recognize her true worth.

You find the best examples of the California fan palm in the nearly concealed oases here that signify its natural habitat. You can stare across the desert landscape, searching, and almost miss the oasis entirely if you’re not looking carefully.

Stepping into one of these sanctuaries, their sudden, unexpected lushness startles me. I absorb their emerald fertility, and how their feathery avocado-colored fronds stand out against the harsh, sand-colored desert. I hear the wind ruffling the fronds high above my head and feel small. A view of Willis Palms Oasis and the San Jacinto Mountains.

Palms in general have a history with humans as old as the first societies. The Middle Eastern date palm was commonly used in Mesopotamian society for food. Ancient Romans gave palm branches as a symbol of triumph to their champions. Here, in the inland California desert region, centuries before palms were cultivated for their horticultural and ornamental value, the Cahuilla Indians used Washingtonia filifera as a natural resource, weaving its fronds into baskets and roofing, and considering the palm oases sacred land.

Similar in taste to a date, the fruit is comparable to a pomegranate seed — more seed than fruit — and coated in a sticky, honeylike substance. This is the candy of the desert, a morsel of potent sugar in a land known more for its severe challenges and alkaline landscape than sweetness.

The flexible construction of the fan palm is a necessary asset in order for the tree to withstand the high, variable winds of the desert.

As well as providing nourishment, the palm is also a key marker of that other fundamental of life: water. Where palms occur in a natural cluster, water is nearby. But standing in an oasis, surrounded by the arid wilderness, I wonder: Where does the water come from? The natural aquifer in Palm Springs is sometimes hundreds of feet beneath the surface. The palms may be amazingly adaptive, but their roots do not reach that deep.

At the Thousand Palms oasis, my eyes follow the upthrust of the San Andreas Fault, where I see palms proliferating along the fault line. Earthquake faults often intercept the water table and cause it to flow upward, creating pockets of surface water, a necessary ingredient for an oasis to survive. If tectonic plates don’t reliably ram up against each other, indigenous palms don’t thrive. A couple of miles from Thousand Palms is the Pushawalla Palm Oasis feeding on water bubbling up from a San Andreas fault line.

The disaster-loving palm prospers not only through seismic upheaval, but after fire, one of the West’s most devastating natural forces. According to tribal leader and historian Francisco Patencio (1857-1947), Cahuilla medicine men would order fires set to the groves to clear out the palm-boring beetles and to propagate more abundant crops of fruit, while freeing a path for new seedlings to sprout, bathed in sunlight.

“Indian-initiated fires likely maintained the palms in far greater numbers than would have occurred under natural conditions,” writes James Cornett, a biologist who authored Desert Palm Oasis. “It is not inconceivable that the entire status of palms … might have been vastly different were it not for the Indians’ use and management of this spectacular desert plant.”

Cameron Barrows, a research ecologist at the University of California, Riverside, claims these palms are hearty enough to withstand fire and don’t need the flames. Counters Cornett: “More palm plants and sweeter, more abundant fruit are found in the aftermath of a burn.”

Like all palms, Washingtonia filifera isn’t actually a tree at all, but is more closely related to grasses, orchids, and bamboos. Rather than sprouting growth rings and adding girth to its trunk, a palm is basically a column that sucks water from the roots to its sprouting crown via a series of drinking-strawlike tubes. A palm’s trunk is simply a mass of spongy material that expands as the tree grows.

The “skirt” or “cloak” of dried leaves hanging down the trunk of the native California fan palm, meanwhile, is more than a fashion statement, it’s a home to animals who help the palm to propagate.

According to Barrows, if you could see under those skirts, it would look like an “apartment building” for creatures who live in the gap between the trunk and the skirt, including three or four species of owl, pack rats, deer mice, a few types of bat, and maybe a king snake or two. The temperature is cooler against the palm’s trunk, thanks to the water flowing within, and the skirt of desiccated leaves is a protective blanket against soaring desert heat.

Hooded orioles create nests from the palm fibers, while other birds, coyotes, rodents, and the gray fox find sustenance in the fruit. By cooperating with its neighbors, this wise palm ensures its survival as both animals and humans help spread its seed.

Whether transplanted or native, the palms that took root here, like people, lend Palm Springs its unique character. Just as the palm adapted to thrive here, people adapted their architecture and aesthetic to accommodate and celebrate the palm. One eave design allows the plant to grow next to a house, then directs it through round holes in the overhanging roof. And in the 1960s, growing two tall, spindly palms in tandem to create the “Twin Palms” look was the rage.

That two natural forces feared most by human residents of Southern California — earthquakes and fire — nurture the magnificent palm is curious, but like the concepts of “disaster” and “immigrant,” their positive or negative connotation is about personal perception. To the plant, they’re part of a wonderfully rich, abundant life course. To the person, they’re part of the whole California experience, which is forged in large part, by its many immigrants. The Cahuilla Indians made a paste of the fruit mixed with dried meat as a portable source of nutrition, essentially creating the original power bar. The soft sediment surrounding Pushawalla has eroded into a dramatic backdrop.