Pam Ann: Flying Should Not Be This Fun 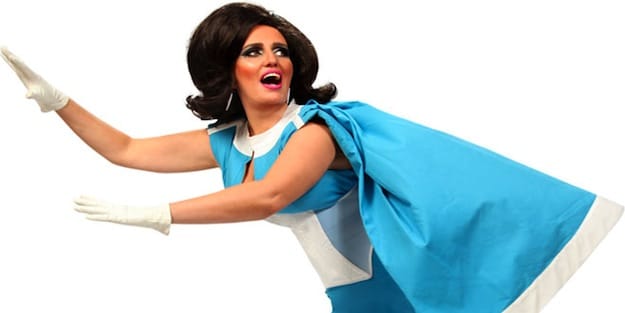 Pan American World Airlines reappeared on the radar a few months ago thanks to a sizeable memorabilia stash presented by actor Philip Keene during Modernism Week in Palm Springs.

That’s not to be confused with Pam Ann, a character created by comedian Caroline Reid, who happens to carry Pan Am tote bags and wear the signature outfits as part of her stewardess-from-hell routine she will bring May 10 to the McCallum Theatre in Palm Desert.

“Pam Ann: Cockpit!” is coming to the U.S. for its first tour after successful sellout runs in Australia and Europe. With her big hair and audacious sense of humor, Pam Ann has already established a following in the LGBT community.

She will premiere her own take on the late ABC-TV series, Pan Am, while poking fun at air travel and targeting some of the biggest international airline goofs while camping it up in a style that will make you think of Dame Edna, Kathy Griffin or Chelsea Handler.

In her native Australia, Pam Am had her own TV talk show, “The Pam Ann Show”, and even hosted Australia’s live broadcast of Mardi Gras that was seen by more than two million homes.

While Pam Ann is her signature character, Reid also plays a variety of flight attendants ranging from Irish to Chinese.

If you were lucky enough to catch Cher’s Farewell Tour in 2004, Pam Ann was part of it.