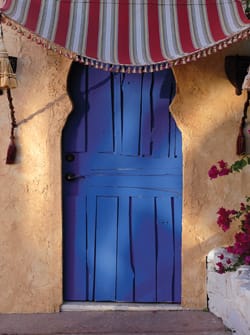 Jewel-toned sheers dance in the breeze to the soft lilt of belly-dancing music. An innkeeper pours warm rosewater over the hands of a guest about to enjoy refreshments. The scent of apricot wafts through the air as two other guests simultaneously inhale flavored tobacco from a hookah pipe. This is Morocco.

Well, actually, this is the Moroccan “experience” — and it’s only eight miles north of Palm Springs.

John Aguilar — co-owner with Bruce Abney of the 4-month-old, 11-room El Morocco Inn & Spa in Desert Hot Springs — fell in love with Casablanca during a one-day side trip from Spain (an eight-mile ride across the Strait of Gibraltar). “Everybody was warm and friendly. I felt embraced, and I wanted to bring that sense of the Moroccan experience back home,” he says.

Aguilar and Abney owned a home in Palm Springs five years before moving to the desert full time in 1999. In San Francisco, Aguilar worked as director of real estate for the Port of Oakland and then San Francisco Presidio Trust. Abney, once a trainer for the Hilton chain, was general manager of Hotel Bohème.

“We wanted a climate that would go with the theme,” Aguilar says. The Coachella Valley mirrors not only the climate of Morocco, but also the setting of desert sand and date palms against the backdrop of a mountain range.

From the moment guests walk through the front door, Abney wants to transport them to another place. He took pains, for example, to have the cement flooring resemble sand. Sheer fabrics hang in a canopy from a lantern over the reception desk made by Abney. Its front is upholstered with Moroccan fabric, the top painted red with the typical eight-pointed star motif in gold. Fez-topped monkeys hold a dish of the inn’s business cards, while another monkey forms a lamp. Although it’s hard to disguise a laptop computer, at least the mouse pad resembles a patterned Moroccan carpet. In addition to a tented telephone “booth” and peacock feathers in large vases, the entryway features rough-hewn double doors from a Moroccan house. “They were very, very pricey, but the fact of the matter is they are a piece of art,” Abney says, admiring the hand-routed wood and pondering the story behind what caused two stains.

Beyond the entryway, guests step into an interior courtyard that Abney likens to a Moroccan riad (a house with an interior garden). The courtyard features a pool, canopied sofas, a fire pit surrounded by Moroccan leather poufs on prayer rugs, a rattan bar, and — behind a wall with keyhole-cut windows and floating sheers — a large hot mineral water spa ringed with blue rope-designed tiles (matching the tile around the pool).

Guest-room doors are painted a saturated blue, mimicking those in Morocco, where the vivid hue is thought to ward off evil spirits, who, attracted by the color, will linger and not enter. “We copied the doors in Morocco,” Abney says, explaining how they beat and split the wood to make it look aged, added round caps, and painted them Majorelle Blue — a color named for French artist Jacques Majorelle, who lived in Morocco in the 1920s and 1930s. Abney picks up a book in the library and opens it to a picture of a small hexagonal table.

“Through 10,000 circuitous routes, I found that table,” he says. “I bought the table to get the blue and took it with me to the paint store to match.”

Each door also features a knocker in the form of the “hand of Fatima” (a Moroccan symbol of fertility). Instead of a “Do Not Disturb” card, a silver tassel is provided to hang on the doorknob to signal a request for privacy.

At one end of the courtyard, guests find refreshments and entertainment in the Kasbah Lounge and Library. In the morning, an elaborate, complimentary breakfast buffet includes a house-blend granola. Starbucks coffee beans and French-press coffeemakers are available at all times, as are iced Desert Hot Springs prize-winning water, Humphrey Bogarts (the inn’s version of an Arnold Palmer made with Moroccan mint tea and lemonade), figs, dates, pistachios, and fruit.

Throughout the day, Casablanca runs continuously in the library. Not including the number of times the 1942 film has looped, Aguilar and Abney have watched the Bogart classic “literally hundreds of times.” “Even before we opened, we used to watch this for inspiration,” Aguilar says. Abney points out that the decoration on the piano in Rick’s Café matches the zouak hand painting (detailed patterns created with a fine brush) on a cabinet in the Kasbah Lounge and Library.

The library features a fireplace; cushioned bench seating with lots of velvety toss pillows; a hand-painted octagonal table; patterned, upholstered Ottomans; some of the inn’s more than 200 books on Morocco; magazines (some only in French as a nod to the 1940s French Morocco of Casablanca); and games, including Morocco’s favorite: backgammon.

As in each of the guest rooms, a framed 1940s-vintage poster from the Moroccan tourism bureau hangs on the wall. Carpets, lanterns, fabrics, furnishings, and accessories throughout the inn came from Morocco.

“Sometimes things came a little beat up, but it’s part of their character,” Abney says. He points out cracks in a hand-painted goatskin lamp. “When you buy them in Morocco, they are perfect because the temperature is held in the same range as when they were made,” he says. “When they sit out there in the salty ocean air and arrive a year or six months later, they’re split. At first I hated that, because I am an American and we expect everything to be perfect. I began to realize this is part of their beauty. This is part of their journey.” Near the lamp is a picture of row upon row of colorfully embroidered Moroccan slippers, called babouches; olive branches in a vase; and a two-person, far-infrared sauna equipped with a sound system so guests can listed to Moroccan music while letting the heat soak into their bones.

“We say, ‘Take the heat, take the water, and then take a sofa,’” Abney says. Or guests could get a massage.

On a second level at one end of the courtyard (marked by a wooden screen with intricate geometric cutouts called a moushrabiya) are three spa rooms (one open to the sky and one including a one-person sauna). Guests may choose organic ingredients reminiscent of Moroccan spice routes to enhance a variety of massages. Chamomile, paprika, cumin, cinnamon, and other spices fill small tagines (Moroccan containers with conical lids) on the Blue Parrot Spa Bar (named in honor of a tavern in Casablanca).

Rounding up the Usual Suspects

By fall, Abney and Aguilar hope to move the spa rooms to a garden on the adjacent lot. In addition to building guest-room patios overlooking the garden, they plan a bocce ball court, giant chess- and checkerboards, hammocks, and — the pièce de résistance — a Moroccan tent. “This is the real tent that sultans still travel around in across the Sahara Desert,” Abney says, looking at the partially assembled tent. “If you come inside, you are seeing something that many Moroccans have never seen. It’s for the very, very wealthy.”

The lining fabric features the red and green royal colors. The triple-layer roof and walls include a vinyl liner and canvas exterior, keeping the inside insulated from outdoor temperatures. The 364-square-foot tent — 20 feet tall at its finialed peak — will be divided into two spa rooms, but can be opened into one space for weddings or parties. A wooden floor will be overlaid with carpets. While they have spent as much money to outfit their inn as they did to buy the property, Abney and Aguilar saved money on renovations by performing much of the work themselves — such as installing reeded ceilings on roof overhangs; heavily texturizing and painting walls with pearlescent coppers, golds, and other rich Moroccan tones (Abney was a professional faux finisher for five years); and hanging patterned, striped, and sheer fabrics for awning, canopies, and curtains.

Guest rooms and suites feature canopy beds with upholstered headboards (three with seven-foot-round beds are called “sultan’s play pens”); hanging curtains of beads; silk-threaded pillows in reds, saffrons, crimsons, and blues; and built-in sofas with matching swag and seat cushions copied from a Moroccan palace. The abundant use of sheers and Moroccan fabrics with traditional motifs are courtesy of Abney’s mother, a seamstress who now also lives in Desert Hot Springs.

“It’s nerve-racking handing that fabric off to your mom, because you can’t yell at her if she ruins it,” Abney jokes. “But she didn’t.” When they discovered the former Caravan Spatel and adjacent lot were for sale, they plopped down $275,000 and began renovations. Abney worked as general manager of Orbit Inn in Palm Desert and then Movie Colony Hotel in Palm Springs three years to the day at each, though he plans to stick with El Morocco longer. “This is my retirement,” he explains.

Wanting to blend his real estate expertise with social commitment, Aguilar serves as director of development for the Coachella Valley Housing Coalition during the week and joins Abney and Abney’s brother, Steve, running the inn on weekends. Wearing pullover gauze shirts and long strips of leather with first-name-only tags hanging around their necks in lieu of starched white linen, button-down shirts with badges bearing a hotel logo pinned over the pocket, they balance keeping an eye out for guests’ needs with a desire to give their guests privacy — that is, until happy hour.

A little after 5 p.m., the trio begin setting out martini glasses rimmed in sugar on the courtyard bar and fill them with melon-colored Moroccotinis. As guests begin to gather for the complimentary social hour, they perform the traditional Moroccan hand-washing ceremony, pouring warm rosewater from a silver urn whose lower portion serves as a basin to catch the water. This is when guests typically try a hookah pipe, for $10 selecting flavored tobaccos from Morocco, Syria, and Egypt.

After a chatty hour, the innkeepers gather up the glasses, hand towels, and cracker mixes and the guests head off to dinner. When they return to the inn, they will find a decanter of Spanish cream sherry and small Moroccan tea glasses on a brass tray in the Kasbah Lounge. Perhaps they’ll raise a glass and say, “Here’s looking at you, kid.”