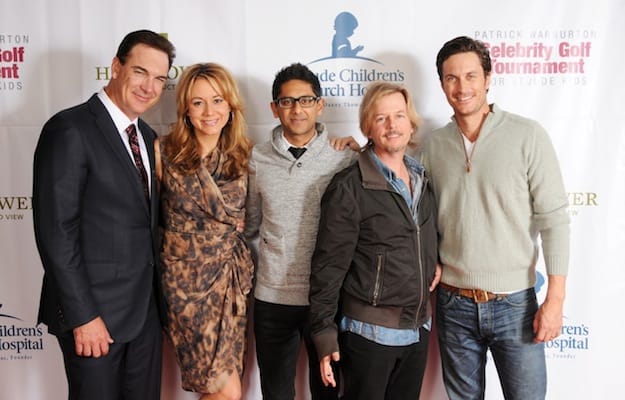 Doubling its efforts of a year ago, the Patrick Warburton Celebrity Golf Tournament raised $727,000 to benefit St. Jude Children's Hospital in Memphis.

In just its third year, the tournament brings a host of celebrities to the Classic Club in Palm Desert led by Warburton, the "Rules of Engagement" star also know for his role as Puddy on "Seinfeld". More than 30 celebrities spent the March 1-3 weekend in the Palm Springs area desert enjoying rock-n-roll, golf and a comedy show.

Saturday night’s gala, hosted by John O’Hurley, began with red carpet appearances by many of the celebrities involved with the tournament, as well as the cast of "Rules of Engagement" including stars like David Spade, Megyn Price and Adhir Kalyan.

Following dinner were silent and live auctions – which, when nearing the $100,000 mark – a surprise announcement by the H.N. and Francis C. Berger Foundation stunned the crowd when they shared the foundation would make a $100,000 matching donation. The evening continued with a comedy show featuring actor/comedian Kevin Pollak and music by the band Sixwire.

Next year's tournament will be held Feb. 28 to March 2 in Palm Desert.