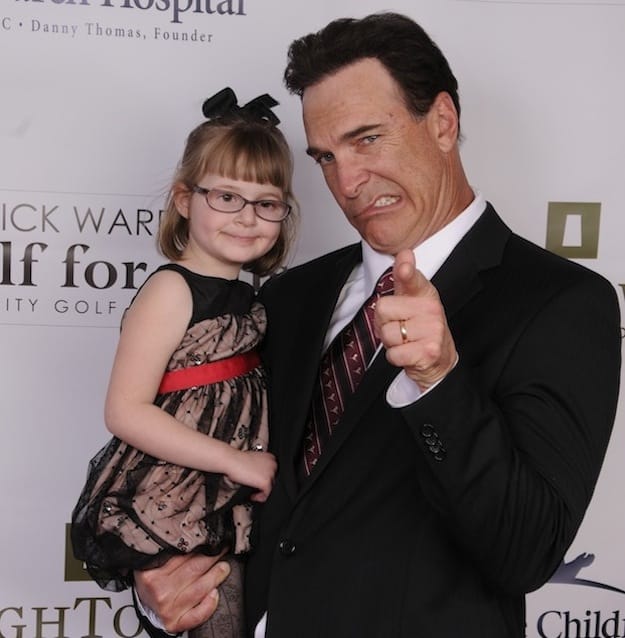 Actor Patrick Warburton may wear shorts at his third annual Celebrity Golf Tournament this weekend at the Classic Club in Palm Desert.

But don’t be surprised if he’s dressed in jeans.

One of his earliest memories of Palm Springs was a bet the then 6-year-old Warburton made with his mom over his choice of dress for their summertime visit to the desert.

“My Mom said I would be the only person in Palm Springs not wearing shorts,” Warburton recalled. “Of course no matter what, there is going to be someone wearing long pants and sure enough there was. I won a $5 bet with my Mom. Even at six, I was a gambling man.”

Warburton, best known for playing the character Puddy on “Seinfeld” which then lead to his current role as Jeff on “Rules of Engagement”, has been coming out to the desert on a more consistent basis in the past two years since starting the benefit golf tournament. But those childhood memories stayed with him because he sees reminders upon his return.

“I just remember seeing the shuffleboard courts and the well manicured lawns,” Warburton said. “It was classic Palm Springs, which in many ways, a lot hasn’t changed. I love some of the classic architecture out there.”

While sitting in his car Monday trying to get past a head cold and staying out a little late from attending the Seth Macfarlane after party Sunday night, Warburton talked about the tournament, its benefactor – St. Jude Children’s Hospital – and Macfarlane as host of the 2013 Oscars.

By the way, do you still have the $5 you won from your Mom?
“I think I spent it on a box of Bubble Yum or more likely 7-11 trading cards.”

So what did you think of Seth Macfarlane’s performance as host of the 2013 Academy Awards (note: Warburton provides the voice of Joe Swanson on “Family Guy” and had a role in the movie “Ted” – both Macfarlane projects)?
“I thought he did great. It was a lot of fun. I was proud of him. It’s a very demanding gig. Take all of Seth’s accomplishments to date and that is a whole new skill level, and I thought he did really well. When there are a billion eyes on you and a room full of Hollywood royalty, what an intimidating gig. I thought he pulled it off. He is terribly charming and terribly talented. I thought he was the man for the job.”

What connection did you feel in choosing St. Jude to be the benefactor of your golf tournament?
"Whether you have a sick child or not, what St. Jude does and how they do it resonates with all Americans. What they do is the most important thing in the world – they help sick children get better. And they do it like nobody else. When you look at what they have accomplished, their methods, never turning a child away whether the family can pay or not, having to make their own medicines, it’s a remarkable organization born of the spirit of Danny Thomas. If my wife and I have any constant prayer, it’s that our children our healthy. St. Jude’s Hospital is such a blessing. They heal catastrophic sick children. That’s where God and science meet and miracles happen on a daily basis."

Who can fans coming out for Friday night’s jam session expect to hear?
"Our new addition is Mike Mills from R.E.M. This will be his first ever event of this sort. He’s supposed to be a real solid golfer. We’re excited to have Mike. We have John Elfante, the lead singer from Kansas, guitarist Don Felder from the Eagles, legend Alice Cooper, guitarist Orianthi Panagaris (who was the lead guitarist for Michael Jackson’s “This is It” concert series). The best part of Friday night jam is you’re about 5-10 feet from the stage, listening to these people jam, dancing and hanging out with the celebs. I encourage everyone to come.”

Where might viewers see you next?
" 'Milo' is premiering at the South by Southwest Conferences and Festivals (March 8-17 in Austin, Texas)."

Tickets for the Friday night jam are still available at $125 each. For ticket information, visit Warburton's website.