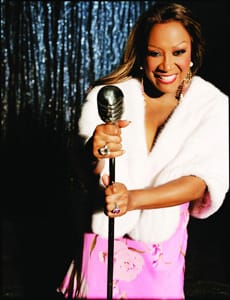 A thriving career with a new album to promote never stops Patti LaBelle from dedicating her talent to charity, often to conquer the diseases that have impacted her family.

In addition to her Feb. 3 performance in Palm Springs at the 13th Annual Steve Chase Humanitarian Awards Gala to benefit Desert AIDS Project, LaBelle lends her voice to the National Minority AIDS Council’s “Live Long, Sugar” campaign and earned the organization’s lifetime achievement award. She also received an Award of Courage in 2004 from the American Foundation for AIDS Research. In 2004, she performed at the Fashion Cares gala in Toronto, Canada’s biggest fundraiser to battle AIDS.

LaBelle shows cancer no mercy either: The University of Miami’s Sylvestri Comprehensive Care Center dedicated a laboratory to her for her tireless work against the disease. All proceeds from her new album, The Gospel According to Patti LaBelle, benefit cancer research. (Released Nov. 21, 2006, the album hit No. 1 on Billboard’s gospel chart.)

Community-based charities also get her attention; even nearby Yucca Valley has felt her impact. The LaBelle Community Football League kicked off in 2003 with support from LaBelle and NFL players Terrell Owens, Donovan McNabb, Maurice Spencer, Ray Lewis, Bobby Taylor, and Stephen Davis. The AAA minor league community football system has teams on the east and west coasts, with plans for national expansion. The Yucca Valley Spartans, also known as the Desert Valley Spartans, practice in Palm Springs. And as if all these causes don’t keep the singer busy enough, she is a National Celebrity Cabinet Member for the American Red Cross and sits on the boards for the Alzheimer Association and the National Cancer Institute. The National Medical Association administers the Patti LaBelle Medical Student Scholarship, created in 1995 to help African-American medical students.

Aside from her music, she may be best known for her public — and personal — battle against diabetes. Most television viewers have seen her commercials for the OneTouch blood glucose monitoring system; she also is a longtime spokesman for the American Diabetes Association. DID YOU KNOW …
Aside from her cookbooks, LaBelle has written Don’t Block the Blessings: Revelations of a Lifetime (Berkley, 1998), a bestseller; and Patti’s Pearls (Warner Books, 2002), an inspirational book.

Her clothing, jewelry, cosmetic, and fragrance lines are available through her Web site and the Home Shopping Network.

She holds honorary doctorates from Drexel University, Cambridge University, and the Berklee College of Music.

Her lifestyle TV show, Living It Up With Patti LaBelle, airs on TV One Network.

Her star on the Hollywood Walk of Fame was paid for entirely by her fans. Patti LaBelle’s given name is Patricia Louise Holte. She was born May 24, 1944, in Philadelphia, Pa.

LaBelle is divorced with four sons and one daughter. One is her biological son; she adopted her late sisters’ children.

She has four Rottweilers and two Cane Corsos.