"Hands down, I wouldn't have the career that I have without the community embracing me," says Paula Abdul about performing at the Sunday Tea Dance that concludes White Party Palm Springs on May 1.
PHOTOGRAPHY BY SARAH KRICK

Paula Abdul is ready to party. The entertainer has been rehearsing for her upcoming concert that will close the White Party Palm Springs this weekend and wants to finally get on the stage to sing and dance in front of her fans. Abdul began her career as the first Laker Girls cheerleader (Abdul features as a character in the acclaimed HBO series Winning Time: The Rise of the Lakers Dynasty) before becoming renowned in the industry as the talented choreographer for an array of iconic entertainers such as Janet Jackson, Michael Jackson, and Prince.

In 1988, Abdul released her No. 1 album, Forever Your Girl, which propelled four singles, including “Straight Up,” “Cold Hearted,” “Opposites Attract,” and the title song, to the top of the Billboard charts. Her career continued to soar with 1991 release of her second number one album, Spellbound, which sent two more singles (“Rush, Rush” and “The Promise of a New Day”) to the same highest position. Remarkably, Abdul’s last studio album to date was 1995’s Head Over Heels, which didn’t quite match the success of her first two, although it launched a popular single (“My Love is For Real”).

She continued choreographing movies, including Jerry Maguire and American Beauty, and spent seven years (from 2002 to 2009) as the nice judge opposite Simon Cowell and Randy Jackson on American Idol. She also headlined her own reality series in 2007, Hey Paula. Since then, she’s performed a Las Vegas residency, headlined L.A. Pride, and made appearances as a guest judge on So You Think You Can Dance and RuPaul’s Drag Race.

Ahead of her May 1 performance,  Abdul caught up with Palm Springs Life to talk about her stint on American Idol, her legacy, and why Palm Springs has always been part of her life. 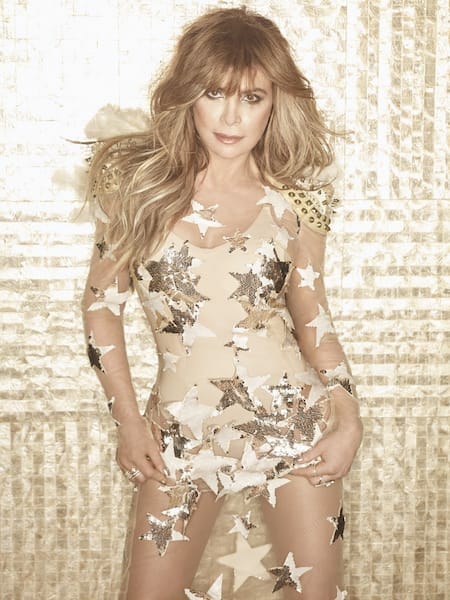 You’ve been posting clips of rehearsals for your White Party show on social media. How are you making this concert special?

I always come with a few tricks up my sleeve, but overall, I just want to have the audience to have a blast, have fun with me, dance, sing along, and just smile.

Have you been to the White Party before?

I've never been to the White Party. That's what makes me so excited because I've been wanting to go for so long and this has been a dream come true to be asked. I performed at L.A. Pride the last time it was live. After that, Jeffrey Sanker [founder of White Party who died in 2021] said, "I want Paula to perform at the White Party." I'm just so honored to be able to fulfill his wish and to give back to what amazing progress and amazing triumphs that he achieved and pay tribute to him, as well as just have a blast. That's what I'm looking forward to and connecting with the audience, which I hear is going to be on fire.

What do you appreciate most about performing for a primarily gay audience?

Hands down, I wouldn't have the career that I have without the community embracing me. I've always felt that, and the community feels the love right back. I have the deepest respect. My career started as a choreographer and the amount of the most beautiful gems that have left the legacy of amazing dance behind, watching them pass, and grieving over that has been a tremendous toll. I've been blessed to have the community in my life from... I can't even remember when. Before I even became Paula Abdul, whatever that means.

When did you become aware of this huge gay fan base you have?

Well, you know what? I've been fortunate enough to experience it since I started my career as a choreographer. To be able to break ground and create a new style that was receptive to the artists I worked with, such as Janet, Michael, Prince, George Michael, I mean the amazing artists I got to work with. I was able to hire incredible dancers. I always said, I'm going to hire talent and talent has no prejudice. So, I didn't care if you were tall, short, skinny, overweight, freckle faced, braces, I didn't care. I just hired talent and that just caught on and the community were really celebrating me, even behind the scenes when I was a choreographer.

You recently posted a video you made with the group of gentlemen known as The Old Gays. How did that come about?

Any chance they'll be involved in your White Party performance because that would be next level?

I offered them to, but I know that they're traveling and have something that is conflicting with the actual T-Dance. Otherwise, I would definitely have them on stage.

I know you've performed in the desert before. What's your relationship like with Palm Springs?

Well, Palm Springs, is so part of the fabric of my childhood and life. When I got into junior high and high school, Spring Break was all about caravanning up to Palm Springs and cruising down the streets with the top down and wreaking havoc and just experiencing that whole fun Spring Break. Then when I became a Laker Girl, we would do our summer bootcamp at Dr. Buss's hotel, which was the Ocotillo Lodge. And while the players were doing their double day practices, we were doing our double day cheerleading and dance rehearsals at the Ocotillo Lodge. So, Palm Springs has been part of the fabric of my life and now my sister lives in La Quinta, so I'm always going back and forth.

Since you mentioned being a Lakers Girl, what's your opinion of the series Winning Time, in which you're portrayed by actress Carina Conti?

I'm getting a big kick out of it. It is unauthorized, so there are lots of liberties taken, but I can tell you, seeing John C. Reilly as Dr. Jerry Buss just puts the biggest smile on my face. He's amazing. I got to meet Carina Conti. She is a sweetheart. We met by accident. Literally, it just happened to be where we were at the same place at the same time, and she was so charming and that's how I found out that this was even happening. It's been a hoot. It really has. I mean, the actors are pretty darn great, but I will say, there are lots of liberties taken for entertainment purposes. But that's all the magic of it too.

You have a milestone birthday coming up this summer [Abdul will turn 60 on June 19]. Are you being reflective about what you've already accomplished or are you looking forward to what's to come?

I'm looking forward to celebrating. I want to celebrate with my closest, nearest and dearest friends and family. I don't know exactly what we're doing. I know that my sister's trying to plan something behind my back, but that never really works out. I always find out. I'm the worst. I can guess exactly what's going to happen, and they hate that, so I'm just going to keep my mouth shut and let my friends and family set it up and put on the milestone birthday.

Can we hope to hear new music in the future?

I actually am working on new music right now, as we speak. I'm doing different songs that I have co-written, songs that I haven't written, that I love the producers and writers that wrote them. I'm doing up-tempo stuff you can groove too and I'm excited about it. I'm doing it for fun, but I know that when I do things out of my heart for fun, the magic starts there. It's when there's pressure on me, I deliver, but it might not be the best of experiences so I'm enjoying my time and curating some cool stuff.

I've spoken with people who've worked with you and every single one said you are one of the nicest people in show business. Why is it so important for you to put goodness out into the world?

I am who I am, and I was raised the way. I just hope my mom and dad are smiling down. I know they are. They taught me and my sister really important foundational things. It doesn't take a second out of your day to be present in front of someone and to make eye contact and let someone feel like they're heard and respected. I mean, these are things that we both were taught as young girls and to stay grounded in gratitude. So, it's not that it's important for me to be this way, it is who I am, and I don't know how to be any other way, to be honest with you.

You had that reputation on American Idol.

On Idol, it was an interesting double-edged sword. I mean, you could see that part of the magic of the chemistry between Simon and I and Randy were the fact that I was the encouraging cheerleader and really encouraging them on and Randy was like the cool brother. Some things you can't just manufacture. It just is what it is and that's who I've been.

Randy recently gave an interview saying that talent competition judges are too nice today, and they're not serving the contestants well.

I understand where he's coming from because he's gauging it off of when the three of us were judges, whereas there would be an argument as to whether we would put someone through that the current crop of judges put through. But see, I think it's all subjective. Talent is in abundance and it's also subjective, but what we would hear live in the studio didn't always translate to what came across on television. There's a lot of factors that go into it. I think that I'm just so glad that there's still talent shows that are able to go out and find the unassuming, unexpected star.

You really changed the dance music video format. I wonder if people tell you how you've influenced them or if there are young entertainers who tell you how important you are to them.

I'm blessed and grateful to say every day of my life, I'm reminded, in some form or another, just how much I changed the trajectory of what popular dance is and how I made it very apparent on MTV back when MTV played music video. I'm reminded because I'm constantly still teaching. I still teach thousands of students. I'll do summer intensives and scholarship programs and I'm constantly around demographics that start from six and seven years old, all the way up to college. So yeah, it's been a blessing and a gift that keeps on giving.

DOWNLOAD THE APP: For those that might not be able to make it out to the desert this weekend, UPLIVE will carry the exclusive live streaming for the event. Download the app from the App store and join in!

• READ NEXT: LGBTQ+ History: Why We Went to Cathedral City.