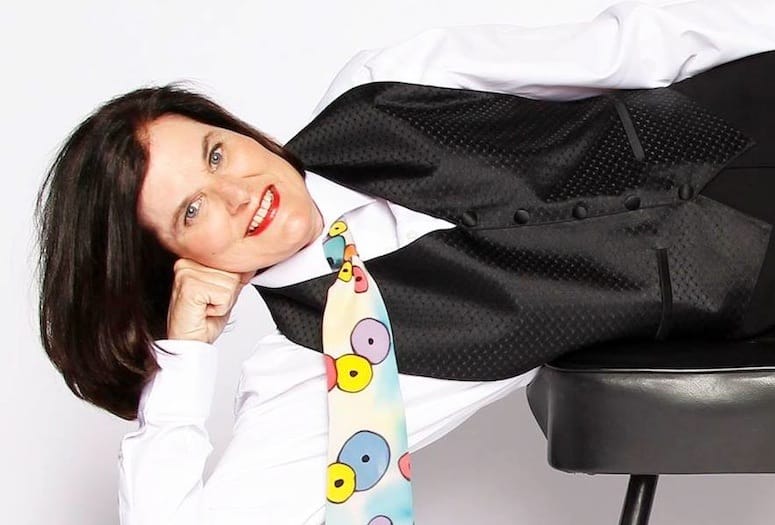 Comedian Paula Poundstone comes to McCallum Theatre Nov. 5 on the heels of a new CD and bestselling book.
PHOTOS COURTESY OF PAULA POUNDSTONE

Like so many other people with 14 cats, two dogs, and one ant left over from a beleaguered ant farm ….

On second thought: Paula Poundstone is not like so many other people.

Far from it. But that’s precisely why the comedian remains so popular.

Poundstone rose to fame in the 1990s and managed to ride the unpredictable roller coaster ride of success pretty well, braving career ups and downs along the way. Recently, thanks to a stellar double-live CD (North By Northwest: Paula Poundstone Live!) that debuted at No. 1 on Amazon’s “Hot New Releases” in 2016 and a recent bestselling book, The Totally Unscientific Study of The Search For Happiness, the Cable ACE Award winner (Best Stand-up Comedy Special) has been experiencing a midlife career surge.

On the eve of her show at McCallum Theatre Nov. 5, the comedian shares the joys and the oddities of her comic life with Palm Springs Life.

PSL: You’ve been in the business for more than 20 years.

Paula Poundstone: I try hard to make sure everyone in the crowd can have a good time. I have also spent years trying to be more and more myself on stage, which, I think, makes other people feel like they can be themselves. When I was young, what I came to be familiar with was sketch comedy and to this day, I worship Lily Tomlin and she’s only amassed more and more talent as she’s gone along. Later, it was Carol Burnett.

PSL: Did you ever think your life would take the course it took in comedy?

PP: The word comedian was used in reference to me when I was very little and it was the biggest word I ever knew.

PP: Not exactly. I grew up in a small town in Massachusetts and my parents had the Bill Cosby albums. 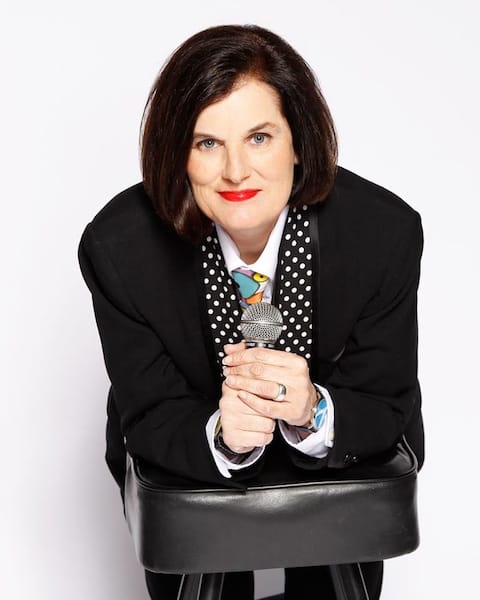 Paula Poundstone: “I may have always saw myself being a comic, but it was only serendipity that made it that I actually became one.”

PP: I would sit in a chair as a child and when the album was done playing, I would flip it and listen to the other half. It was only as an adult that I began to hear the ambient sound of what was on the Cosby albums — you could hear glasses tinkling a little bit, and I said to myself, “Oh, they recorded this in a nightclub.” As a kid, it didn’t occur to me that he had this job going from place to place telling jokes.

PSL: Did that give you ideas?

PP: Well, at that time, there were only three channels on TV and stand-up comedy was mostly a late-night affair on “The Tonight Show,” and my parents didn’t enjoy my company enough to have me up with them. I had no idea the path I would use to get there.

PSL: When did it hit you?

PP: I was bussing tables in Boston, Mass., and one night, I went with friends to this place called Ding Ho in Cambridge. There was a flyer on the wall about a comedy show every Friday night. So I went back and I was in a fever when I saw it. And the rest, as they say, is comedy history. [Laughs] But you know, I may have always saw myself being a comic, but it was only serendipity that made it that I actually became one. I wouldn’t have gone to New York. I wouldn’t have had the wherewithal. It wouldn’t have occurred to me to go.

PSL: So, what’s it like being up there on stage?

PP: I don’t know if I have words for it but it’s probably the most comfortable place in the world for me. And I know how this sounds from a mental health standpoint — second only to Oedipus sleeping with his mother — but … the audience is really my best friend.

PP: I do. And German Shepherds. But 14 cats is not a good idea — at all. I can’t tell you how many times I have tripped over these mother f-ing cats. And I’m always in a hurry. I walk through my house with great purpose. I never stroll. I am always walking quickly. I don’t know why cats aren’t smart enough to figure out, “Hey, that big one over there — stay away from her.” After a while, wouldn’t even a cat figure out: Don’t walk in front of me?

PSL: One would think. OK. Confession time. What is your most significant source of comedic material? Your own life? Current headlines? Roadblocking cats?

PP: Well, I probably get most of my material from my own life, but my own life includes trying to pay attention to current events, without coming apart at the seams and …. being a chairwoman to 14 cats.