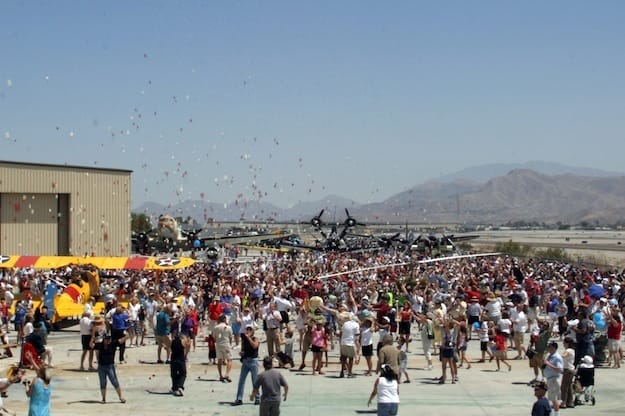 In a tribute to Jimmy Doolittle upon his death in 1993, a single B-25 Bomber performed a flyover of Arlington National Cemetery near Washington, D.C.

The gesture was symbolic of the air raid Doolittle led on Japan in 1942, just a few months after the attack on Pearl Harbor, when 16 Mitchell B-25 Bombers scored a moral victory by hitting targets in Tokyo, Kobe, Yokohama, Osaka and Nagoya.

Doolittle received the Medal of Honor from President Franklin D. Roosevelt, and the mission demonstrated Japan’s vulnerability to defend its homeland.

The air raid was acted out in the 2001 movie, Pearl Harbor, with Alec Baldwin playing Doolittle.

One of the B-25 Bombers used to recreate the movie's air raid will fly over the Palm Springs Air Museum at 1 p.m. May 27 and release 3,000 red and white carnations for the 15th consecutive year.

The dramatic shower of flowers began under the late Bob Pond, one of the air museum’s founders in 1996 and first chairman of the board.

“I’m not sure where the idea came from,” said Phil Hixon, a longtime friend of Pond’s and chairman emeritus of the air museum. “To my knowledge, it came from or through Bob. He was very patriotic.”

Hix said he and Pond met as fellow airplane enthusiasts with hangers across from one another. Together with other like-minded veterans, they answered the question, 'How about an air museum in Palm Springs?" Pond donated many of the planes now housed in the museum and Hixon said the collection continues to be updated including the latest additions, an F-4 Phantom used in Viet Nam and a T33 Shooting Star Jet-Powered Trainer Aircraft that can still travel 500 mph.

Hixon said though the Memorial Day event is filled with several other activities, including flight exhibitions starting at 10 a.m., music, food vendors, face painting and a Beer Garden, the tarmac grows silent for the carnation dropping.

“This event has really grown a lot,” Hixon said. “It’s very touching. While there are fun things when we’re not dropping the flowers, when we do, the crowd is hushed and the appreciation for veterans is there. Many people can take a carnation home."

Admission ranges from $8-$15 per person, which includes regular admission to the museum and the day’s events. For information, call (760) 778-6262 or visit www.palmspringsairmuseum.org