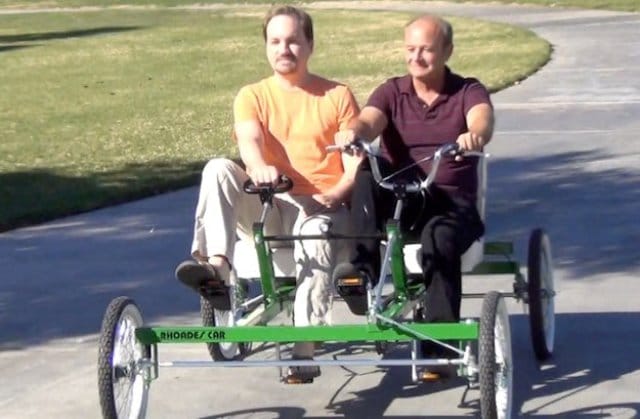 Cars were honking at Paul Harris.

But it was a good thing.

The Palm Springs entrepreneur was out on a Rhoades car, a four-wheel bicycle that is people-powered, doesn’t require a mechanical IQ and capable of holding up to four occupants.

Harris and his partner, Tony Edwards, opened Leisure Wheels Quadracycles in December and have spent the high season introducing this innovative mode of transportation as the first Rhoades Car dealership in California.

“I think this is a great area for it,” said Harris, who is originally from Sacramento and spent much of his life in Davis and San Diego prior to meeting Edwards and moving to Eureka. “There are lots of people who have leisure time and they are becoming more green savvy.”

While still living in Arkansas, Harris was surfing the Internet looking for alternative ways for Edwards, who has epilepsy, to get around town since he can’t drive. They made the trek to the company’s factory in Hendersonville, Tenn., received a tour, test drove some models and signed the dealership papers.

“We talked to the president extensively, and he treats the company as a family,” Harris said. “He is very customer service oriented. Any problems, he takes care of it personally.”

Four models now sit in their dealership storefront, and there are actually 18 variations with fenders, front and rear lights and speeds ranging from 1 to 42. The bicycle arrives at a customer’s home in a wooden crate.

“It will probably take about four different tools to maintain them,” Harris said. “They are very simple and easy for someone to start out using right away.”

Harris said when he and Edwards test-drove the models, they rode on paved, gravel and dirt roads, but doesn’t recommend the vehicle for serious off-road adventures.