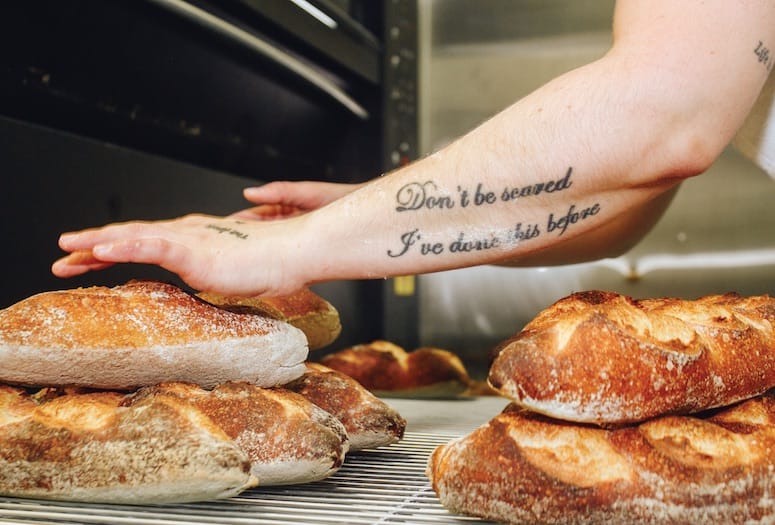 “Qu’ils mangent de la brioche” was a callous statement that ignited a revolution, though historians disagree whether it was Marie Antoinette who said it. It also does not translate as “Let them eat cake.” Cake is gateau. A brioche is rich bread made with eggs and butter. To most people, this would seem like a quibble, but not if you’re French — and definitely not if you’re a bread maker. For most Americans, a bakery is a store where baked goods of all descriptions —cookies, cakes, fruitcakes, and French bread — are produced and sold. In France, a place where one goes to buy bread is a boulangèrie and the store where pastries, cakes, and tortes are made is traditionally called a patisserie. When Christophe and Hélène Meyer opened Peninsula Pastries Palm Springs in 2015 to almost instant success, their business model (but definitely not their creations) needed to conform to American expectations. Christophe, a maître pâtissier (in other words, a pastry genius whose almond torte has reduced me to tears), filled the cases with his sweet art while an apprentice produced superb baguettes, some made with Gruyere, bacon, or olives. It was impossible to make it to the car without breaking off an end and devouring it. 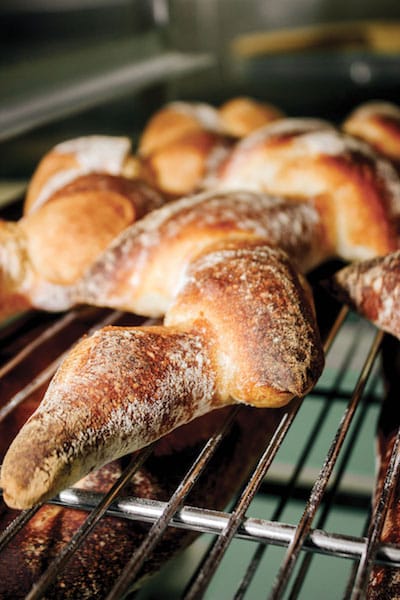 On March 4, 2019, the young baker left Peninsula, and a sign went up on the glass door that opens into its little pink heaven. It announced that, temporarily, baguettes would no longer be available. For many, this was devastating news. If there had been a Bastille to storm, they would have stormed it. This was precisely why the monarchy fell and the revolution succeeded: The people demand bread! (And none of that spongy, tasteless, GMO-engineered shit.)

Last September, Raphaële Arnaud became the new boulangère (breadmaker) at Peninsula Pastries. The Meyers held their breath as she made her first batch of baguettes. And they were perfect. 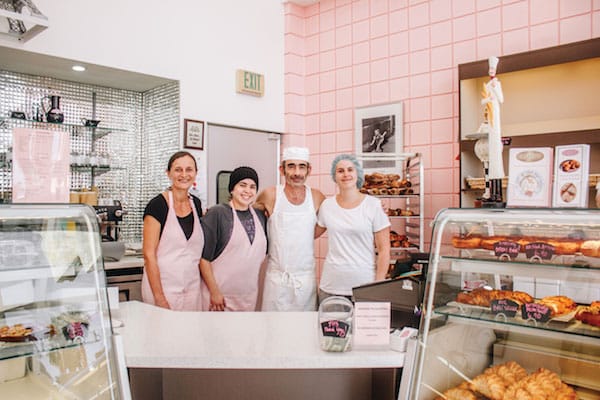 Hardly a surprise. The easy-going Toulouse native has been baking bread for more than a decade — since her apprenticeship began when she was 20. “It was after high school, and I didn’t know what I wanted to do,” she recalls.“ I saw an ad online saying, ‘We’re looking for a baker.’ And I thought, ‘Why not?’”

Her rather laconic approach to the new profession may not have foretold greatness, her commitment to it proved otherwise. In France, it is typical for apprenticeships in baking or cooking to begin at age 15, with students dividing their time between the scene of their apprenticeship and school. But a large industrial bakery took her on, and she devoted herself to learning to make perfect breads with huge quantities of ingredients and gigantic machines.

• READ NEXT: Caviar service is alive and well — and appealing to a younger generation. 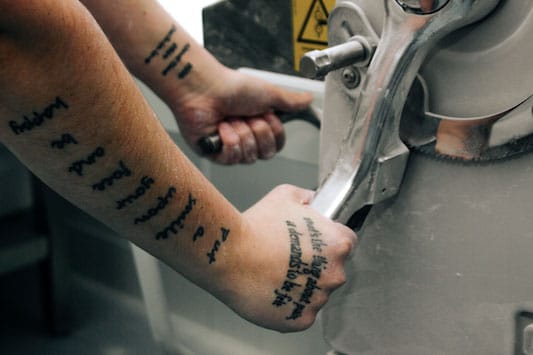 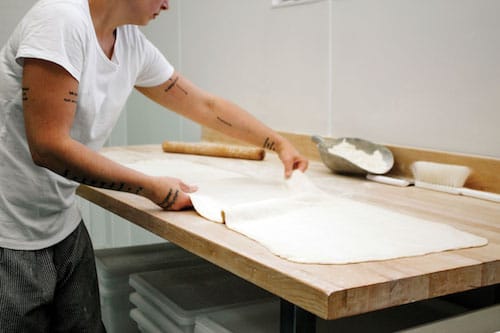 At a large kneading table at Peninsual Pastries, Raphaële Arnaud spreads lengths of flax linen covered with flour and swiftly forms her baguettes. 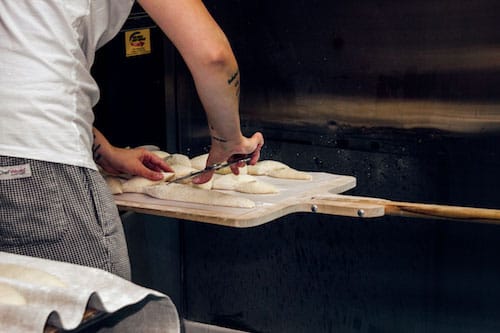 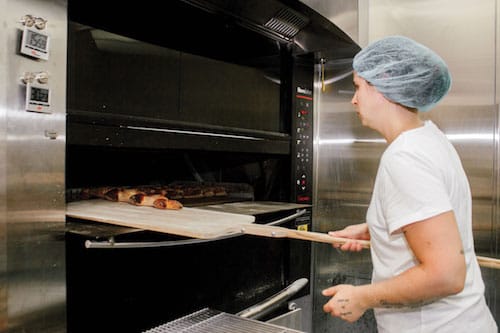 Next, she arranges the loaves in a certain position in the oven. The timing, Arnaud says, is all in her head.

The two narrow rooms in back of the storefront are efficiently organized, and there is no wasted space. A huge steam oven — a modern gas and stone shelf version of the oven that revolutionized French bread making — dominates the back room. It requires a long-handle paddle to retrieve and maneuver the bread. Christophe gives a Gallic shrug when amazement is expressed at its size, and says,  “You should see a big one.”

There are many important steps to making a decent baguette, but perhaps most revolutionary was the introduction of the steam oven. While the long, slim-shaped loaf — sometimes called, depending on the size, a flute or a ficelle — is typically about 2.5 inches in diameter and can run from 26 to 36 inches long, its dimensions were shaped less by aesthetics than the forces of history.

Some historians believe humans began making a form of bread at least 30,000 years ago. Scientists have found the remains of root starches in ancient mojetes, suggesting that people ground roots, mixed them with water, and baked crude breads on heated stone. However, once ancient man began cultivating grains, such as wheat and rye, they evolved into flatbreads, such as the pita, naan, and tortillas still eaten today. The introduction of yeast to baking was likely accidental because it floats in the air. Naturally fermented dough resulted in lighter, airier breads. Commercial yeast production and the process of leavening breads probably began in Egypt around 300 B.C.E.

Bread’s next evolutionary step occurred a few hundred years earlier in Mesopotamia (not for nothing was it known as the fertile crescent) when stones were shaped to grind grains between them and create the finest possible flours. By medieval times, millers all over the world responded to their wealthier clients’ demands by separating bran and germ to create fine, white flours. Thus, the bread one could afford to eat defined one’s social status.

In the 18th century, the stomach of the entire European continent was dependent on bread. Diets varied to some degree in the countryside, where even peasants had access to fruit, vegetables, and dairy, but bread, particularly in France, was all that stood between a family and starvation. Prior to the French revolution, poor management, bad weather, and unchecked hoarding and speculation caused a severe shortage of grains. The storming of the Bastille was less an uprising to free political prisoners than it was a massive cry for bread. Roman emperors, no matter how stupid or corrupt, knew enough to stage entertainments and distribute free bread to ensure the equanimity of the people. Louis XVI and his administration were evidently not heeding their history lessons. 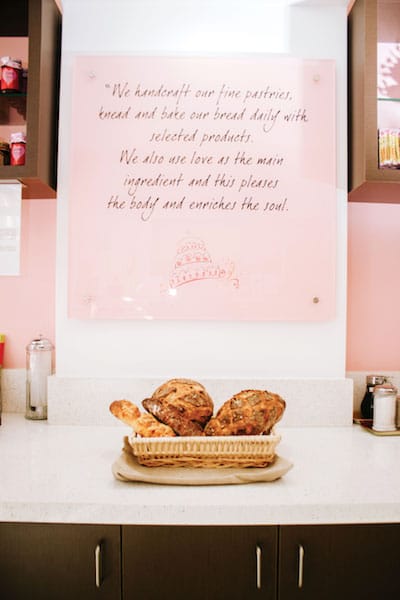 But Napoleon did. Say what you will about the Corsican, but he introduced pain d’egalite, made of three-quarters wheat and one-quarter rye and available to all French people. Napoleonic decrees also specified baking methods, hours of operations, and standards for milling. Eventually, white bread found its way back on to the tables of

French families, but the boule and batard were the more common shapes.

The baguette was more a bread of necessity. Its shape required less kneading and time to bake. But Austrian August Zang changed the future of the baguette when he opened Boulangerie Viennoise in Paris in 1838. Not only did his kipfel become the modern croissant, his Austrian steam oven became the standard French baker’s oven within a decade or two. Also known as a deck oven, the invention was heated to about 390 degrees and the steam created allowed the crust to expand before settling. The result was a lighter loaf with a glazed crust. It was an instant success, and by the end of the century, it was unthinkable in France to have a meal without an accompanying baguette, whether as a tartine or to eat alongside any soup or stew. Arnaud freely admits, “I can eat a baguette by myself at every meal.” 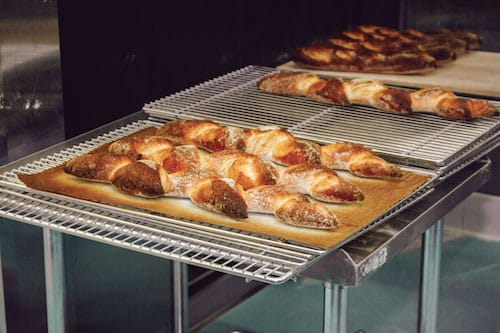 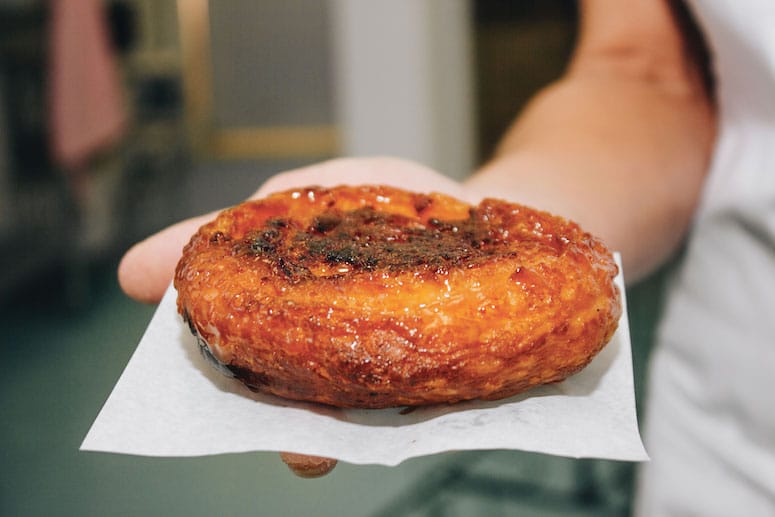 Peninsula imports Rouge Label milled white flour from France. For some of her dough, Arnaud, a Toulouse native, adds yeast; others “auto rise.”

As can I. That admission would have shamed me before I tasted one of Arnaud’s baguettes. (I thought the breads of her predecessor were pretty awesome, but they pale in comparison. I could curl up with one of her warm Gruyere baguettes under the table and not emerge for hours.) The simple fact is that no American bread, whether Wonder or La Brea Bakery, uses as superior a base ingredient: Rouge Label milled white flour from a small milling operation in France. It is 60 percent more expensive to use this French wheat than its American version, and the Meyers import 10 tons of it every year.

Arnaud, who uses different flours for pastries and bread, says flours are seasonal and react differently with water. When she arrived in Palm Springs, the first thing she did was test how the flour reacts in this atmosphere. She begins some of her dough the day before at the end of her shift, and others she mixes when she arrives each morning around 1 a.m. For some of her dough, she adds yeast, but others are only flour and water and she leaves to “auto rise,” a process that can take one to four hours, depending on the flavor she wants to develop. Most the dough rests 24 hours in order to develop the maximum amount of flavor.

The sun has only begun to suggest itself in the east when Arnaud wheels a tall rack toward a large kneading table. at Peninsula Pastries. She takes lengths of couche, untreated flax linen inundated with flour, and as she effortlessly — at what seems like lightning speed — forms her baguettes, weighing each so that every loaf is uniform and laying the shaped dough in fold of the couche. Then, she folds the couche so that the baguettes retain their shape before baking. Depending on the day, she’ll make between 20 and 40 baguettes. She also makes boules and several miches (batards). 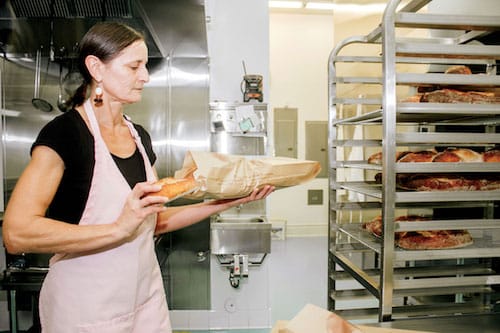 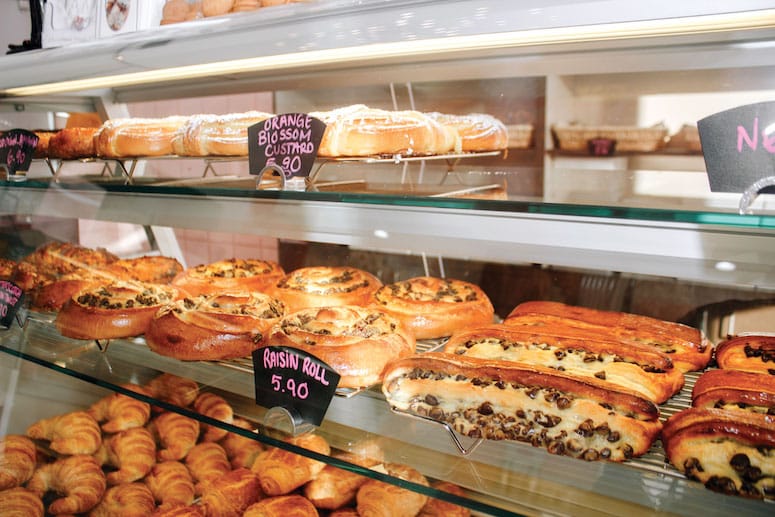 Hélène Meyer inspects the goods before displaying them among other breads, pastries, danishes, cakes, and tarts.

When she finishes, she gets to work mixing dough for the next day so that it has to time to rise and develop. It goes into small bins. About every 45 minutes, she’ll fold the highly elastic dough over a couple times to help it “develop structure.” Every once in a while, she trots into the back room to check the oven temperature. It has to be exactly right before she’ll shovel in the loaves.

When the moment arrives, Arnaud becomes a blur of action. Though the handle of the baking paddle is 10 feet long, she often grips it close to the paddle end so that she can arrange each loaf of bread in a certain position in the oven, despite the intense heat. There are rotating, solid racks in the oven; when one fills, she brings up a new rack and fills it. The timing is in her head: the difference between the cooking time of a half baguette, a full baguette, and a fat batard.

With 10 years of experience in a half dozen countries from New Zealand to Norway, Arnaud knows precisely when to retrieve her breads at Peninsula Pastries. They come out agonizingly fragrant, golden on the bottoms and only a bit more brown and glistening on top. It is all one can do to keep from tearing into a loaf. When it is observed that her breads are like works of art, she shrugs dismissively. “Just don’t ask me to decorate a cake. I would not know what I’m doing.”