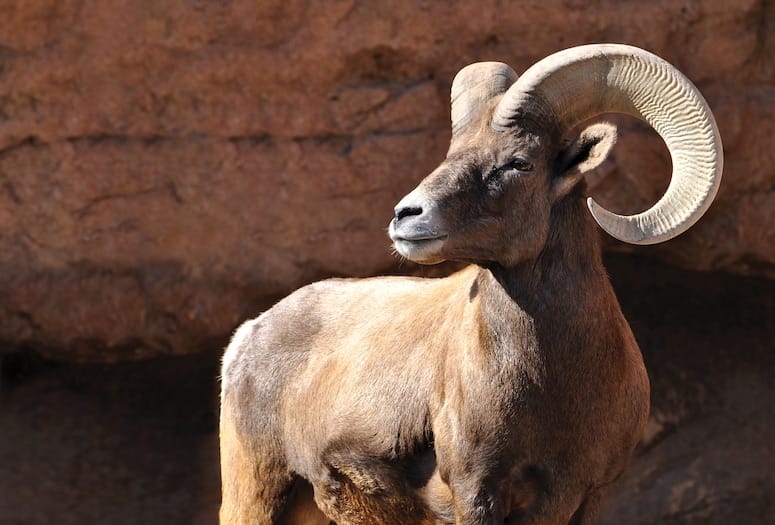 Meandering through the Indian Canyons, where Washingtonia filifera palm trees offer shade from the beating sun, the only constant sounds are a burbling stream and, occasionally, a bird singing out to another and a breeze whistling along. Suddenly, a scuffle above shakes a few rocks loose from the canyon walls, stopping you in your tracks as they bounce noisily down its craggy wall. A magnificent-looking creature with massive curled horns reveals itself as the culprit, and beside him are more from the herd, scouring the narrow ledges for vegetation.

Since the early 1970s, peninsular bighorn sheep — inhabiting California’s peninsular ranges, parts of which include Tribal land belonging to the Agua Caliente Band of Cahuilla Indians — have been protected under California state law, due to declining numbers. “In 1998, those living in the peninsular ranges were federally listed as endangered,” says Janene Colby, an environmental scientist at the California Department of Fish and Wildlife (CDFW). An estimated 1,100 peninsular bighorns existed around 1970. By 2000, that number had fallen to 400.

Diseases passed to peninsular bighorn sheep by domestic animals, like sheep and goats, was the greatest threat, but other causes included loss of habitat as a result of urban development and fragmentation, loss of vegetation due to increased droughts and invasive nonnative plants that outcompete the sheep’s high-quality vegetation (mesquite, cat’s-claw, acacia) for water, and predation by mountain lions and sometimes coyotes, which becomes more common when herds are smaller and more  vulnerable, as well as at higher elevations where vegetation is more abundant. 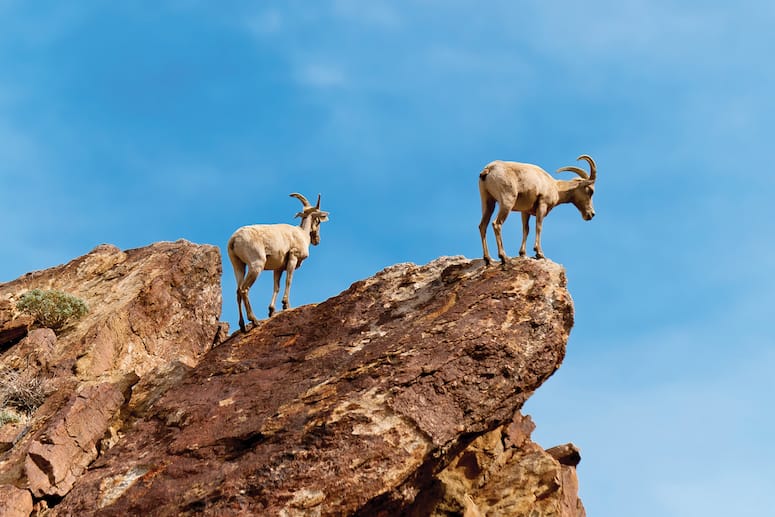 The Tribe has long been proactive about protecting these beautiful animals that graze its Reservation and drink from its streams and has become even more deeply involved in conservation efforts over the last decade. Partnering with CDFW, the United States Fish and Wildlife Service, and the Coachella Valley Association of Governments, the Tribe works diligently to monitor endangered peninsular bighorn sheep that inhabit the San Jacinto Mountains and more than 20,000 acres of Tribal land as well as part of the Santa Rosa Mountains. Encompassing roughly 65 square miles, this area is the northernmost subpopulation of endangered peninsular bighorn sheep, a subset of habitat that stretches some 1,239 square miles from Palm Springs to the U.S.–Mexico border.

Two years ago, members of the Tribe’s Planning & Development Department began working closely with Colby and other biologists from CDFW to monitor local herds, says Justin Conley, an environmental planner with the Tribe. By attaching variable high-frequency collars to sheep every other year (via humane capture and release), which scientists can then monitor with a transceiver, their team can “collect data that enables us to better understand their habitat use, seasonal and daily movements, health and disease, where they give birth, causes of mortality, and other long-term trends,” Conley says. This information helps land managers mitigate any further threats to the sheeps’ habitat, including human activity that disturbs their population.

“For example, if the Tribe wanted to construct a new hiking trail in the Indian Canyons, this data would give us the information we need to plan the trail responsibly and avoid any sensitive sheep areas, such as where they give birth,” Conley explains. Neither the Tribe nor CDFW conduct any invasive population augmentation, such as captive breeding or administering vaccinations to diseased animals. “Rather, the recovery program focuses solely on collecting this data and making environmental changes that will help the herds survive,” he says.

The long-term goal is for the Tribe to monitor these activities independently in its region. “Our hope is that they will take on a leading role,” Colby says, “as it is becoming increasingly difficult for [CDFW] to cover the entire range.”

“In 1998, those living in the peninsular ranges were federally listed as endangered. “

— Janene Colby, Environmental Scientist at the California Department of Fish and Wildlife

The Tribe also spends hundreds of working hours each summer to remove tamarisk trees, fountain grass, and other invasive species that further diminish the variety of vegetation for desert bighorn sheep. “If left unchecked, these plants not only reduce the amount of water available in the streams — some tamarisks can hog hundreds of gallons of water per day — but they can take over riparian areas rapidly, which degrades the habitat,” Conley says.

Information gleaned from data on the herds also helps the Tribe devise rules for visitors to its parks, including limiting hiking between the hours of 8 a.m. and 5 p.m., so as not to scare sheep from their water sources; encouraging guests to stay on trails, thereby minimizing disturbance to areas where they feed or give birth; and prohibiting dogs, which “can be seen as predators to sheep,” Conley says.

Female bighorn sheep, called ewes, live in groups with their lambs. Rams move between ewe groups, joining them during the summer breeding season. 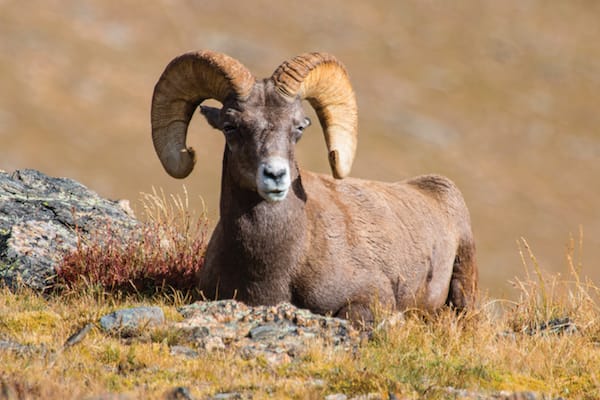 While ewes are able to carry twins, most have only one lamb per season, Colby says. One way that scientists monitor recruitment is by the number of ewes and lambs there are in a herd. They look for a 30 percent ratio or higher — for example, four lambs to 20 ewes. “A lamb-to-ewe ratio below 30 percent means the reproductive success of the ewes is poor,” Conley says. “A higher ratio means the population is able to replace itself and increase in size.”

Since 2000, the population has more than doubled across the nine recovery zones. But to be moved off the endangered list, sheep populations must meet several criteria, including maintaining 25 or more ewes to a region for 12 consecutive years. “We recently achieved the first of the 12 years and have approximately 32 ewes in the San Jacintos,” Conley says. “If it dips below 25 ewes, we must start over.”

Scientists hope that by 2028, desert peninsular bighorn sheep will be delisted. “It’s a slow process,” Conley concedes, “and the population remains extremely vulnerable” to disturbances caused by man and Mother Nature. Continued efforts from Fish and Wildlife, the Tribe — and all of us who explore their habitat — are crucial to the ultimate survival of these precious creatures. 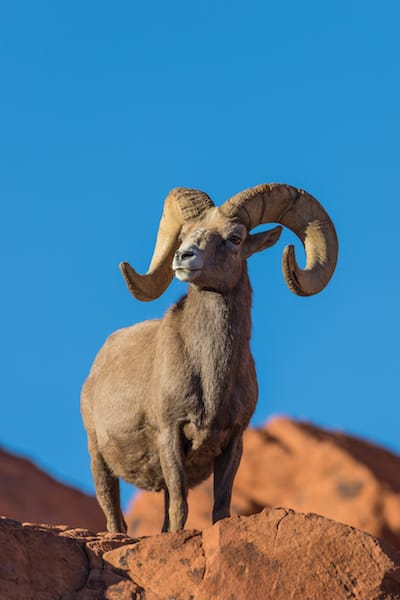 • The scientific name for the desert bighorn sheep is Ovis canadensis nelsoni.

• The species has been federally listed as endangered since 1998.

• An average ewe weighs about 60 pounds, while a ram weighs approximately 105 pounds.

• A ram’s horns — which can weigh as much as 30 pounds — are larger and curl farther than a ewe’s.

• Sheep are herbivores that feed on mesquite, cholla cactus, cat’s-claw acacia, and other native plants.

• Summertime is mating season, and gestation lasts about 170 days.

• Rams have been known to combat head-to-head for more than 24 hours.