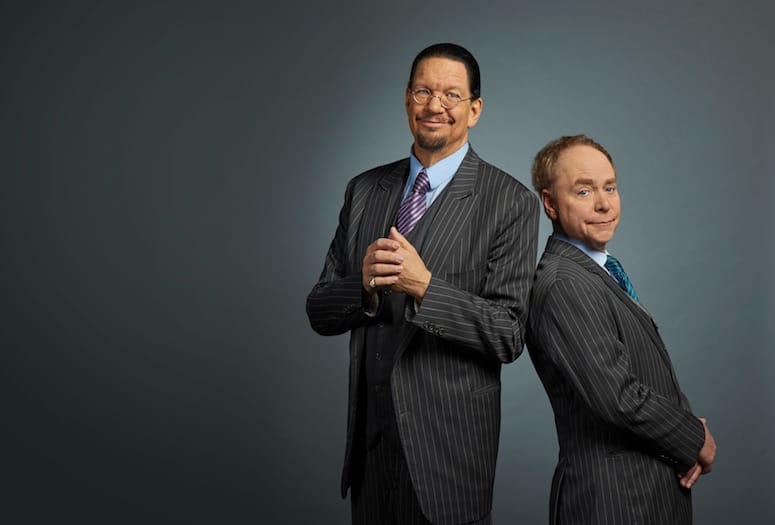 How do they do it? How are Penn Fraser Jillette and Raymond Joseph Teller — known professionally, and much more concisely, as the internationally uber-successful comedic magic duo Penn & Teller — continually able to conjure new feats of magic so breathtaking, so dangerous, so awe-inspiring, and sometimes just so utterly outrageous, year after year?

Ah, but that would be telling, wouldn’t it? As every magic purist, practitioner, and pundit knows, a magician never reveals his or her secrets.

Even so, we heartily suggest you book your tickets now to see just what Penn & Teller will come up with next during their thrill-ride of a performance at The Show at Agua Caliente Casino Resort Spa on Dec. 7 at 8 p.m. USA Today has described the show as “deliciously unsettling”; fans insist it’s pure genius.

With a record-setting 17-year-plus run at the Rio All-Suite Hotel and Casino in Las Vegas, Penn & Teller are no strangers to the visual arts. The duo has worked in tandem together for more than 40 years and long hosted, produced, and performed in a number of hit TV series of their own making. Showtime’s myth-debunking docuseries Penn & Teller: Bulls---! is eight seasons strong, while The CW’s current reality-competition show Penn & Teller: Fool Us recently completed another successful summer-broadcast run wherein contestants vie for a chance to appear in the magicians’ Las Vegas stage show.

"I certainly know the rules of poker and know a lot of card rules, but the idea of playing cards without cheating doesn’t interest me much."Penn Jillette,  magician

Of course, there’s also the legendary 2005 documentary The Aristocrats, for which Penn and Paul Provenza shot 103 different comedians telling their own versions of the world’s most infamous dirty joke, one that the late Johnny Carson had been known to cite as a personal favorite. When I asked Penn for a 2006 Sound & Vision magazine feature about why he felt this century-old joke worked coming from so many different viewpoints that all led to the ultimate same punchline, he noted, “It’s very much improvisational — though it’s more bebop jazz than Phish. We shot over 140 hours of footage for this thing that we boiled down into a 90-minute film.”

In that same interview, Penn also shared his philosophy about the difference between watching magic on TV as opposed to seeing it in person. “Most TV magic is composed of camera tricks, so if what you do is visual illusions or mirror gags, then you’ll welcome that,” Penn observed. “But for people who do magic live, you can’t get better than the eyes. Some mirror tricks might look crappier on high-definition TV, but I don’t do any of the mirror stuff, so I don’t care. Our magic is a little more intellectual, and a little less visual.”

Card tricks don’t factor much into the pair’s performing milieu, in case you were wondering. “I certainly know the rules of poker and know a lot of card rules, but the idea of playing cards without cheating doesn’t interest me much,” Penn admitted.

I then asked if Penn, the consummate magician’s magician, couldn’t just conjure up the 48-hour day in order to do just that. “Well, you’re confusing a deity with a charlatan — a mistake that’s been made for over 2,000 years,” he said with a hearty chuckle. “Me, I just do tricks.”

Penn & Teller will bring their magical talents to The Show at Agua Caliente Casino Resort Spa on Dec. 7.  Visit hotwatercasino.com/TheShow for directions, ticket information, and the lineup of upcoming performers.

This story originally appeared in MeYah Whae, The Magazine of the Agua Caliente Band of Cahuilla Indians, Fall/Winter 2018-19. To read the current digital edition, click HERE.