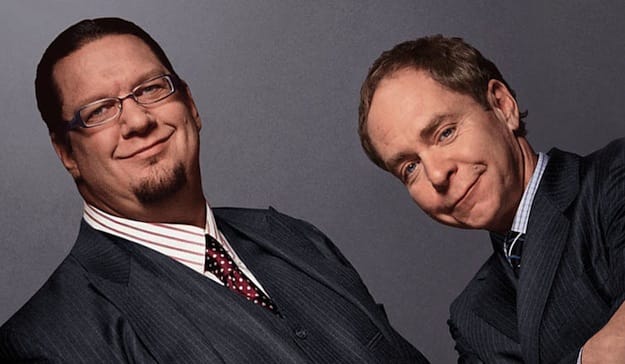 Penn and Teller will take a break from their regular gig at the Rio Las Vegas to entertain Coachella Valley audiences at 9 p.m. May 10 with their special brand of comedy and illusions at The Show at the Agua Caliente Casino Resort Spa in Rancho Mirage.

Formally known as Penn Jilette and Raymond Teller, this duo has performed together since the late 1970s.  Penn, who is currently a contestant on NBC’s Celebrity Apprentice, does most of the talking during the act while Teller rarely speaks but can be heard at times, including a recent telephone conversation with Penn during the airing of Celebrity Apprentice.

Penn posted a note on their Facebook page thanking fans that retweeted his Twitter postings, noting he raised another $2000 for his charity, Opportunity Village, by being this past week’s Apprentice MVP.

Despite the chemistry they have on stage, Penn told Larry King in an interview that they rarely socialize off stage. He considers their business partnership and respect for one another a major reason for their success.

Penn and Teller’s act defies some of the rules of magic, like telling the audience how they did the trick. But just as quickly, they will leave audiences stumped on how they completed another.

Be prepared to interact with these two. They love connecting to their audience, and will ask for volunteers for some tricks.

If the closer for their act is anything like the one in Las Vegas, you’ll love it, and solidifies this tandem’s talents as true illusionists.