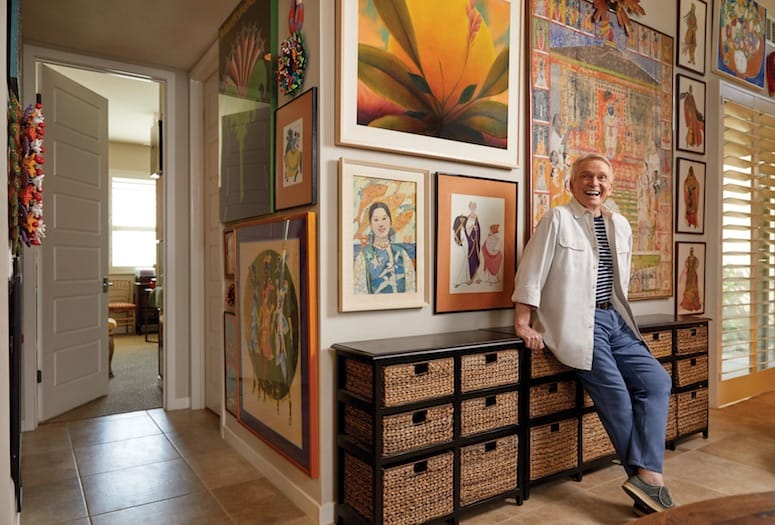 Bob Mackie received an Academy Award nomination for designing the costumes in Pennies From Heaven in 1981.
PHOTOGRAPH BY JONNY MARLOW

Few movies are more challenging to shoot than an old-style Busbee Berkeley Metro-Goldwyn-Mayer musical. Merge the genre with a dark period drama, and you have Pennies From Heaven (1981).

Set in the Great Depression, a sheet music salesman and a schoolteacher escape their miserable lives through song and dance. Directed by Herbert Ross (The Goodbye Girl, Footloose, Steel Magnolias), the film starred Steve Martin and Bernadette Peters and featured costumes by the legendary designer, and Palm Springs resident, Bob Mackie.

“I loved doing it — I got nominated for it — but I don’t think anyone saw it,” Mackie says, referring to his third Academy Award nomination for costume design and the disappointing box office results. The movie cost $20 million to make and earned only $6 million.

It was a remake of eponymous movie starring Bing Crosby that also used classic dance numbers like those made famous by Fred Astaire and Ginger Rogers. Astaire hated the new version, according to a biography on his life by Tim Satchell. “They don’t realize that the ‘30s were a very innocent age … it makes you cry it’s so distasteful,” he said, adding that every scene was “cheap and vulgar.”

There was no mistaking its darkness. “The story is so strange, so twisted, so mean-spirited,” Mackie says, “but fabulous in other ways.”

It was also an extraordinary amount of work. “I could do Depression-era people, and then it switches to Busbee Berkeley in their brains,” which meant recreating costumes from the song and dance numbers of the Golden era of Hollywood. The choreographed classics even included overhead shots of dancers in geometric formation.

“Every dancing girl in the business was hired,” Mackie continues. 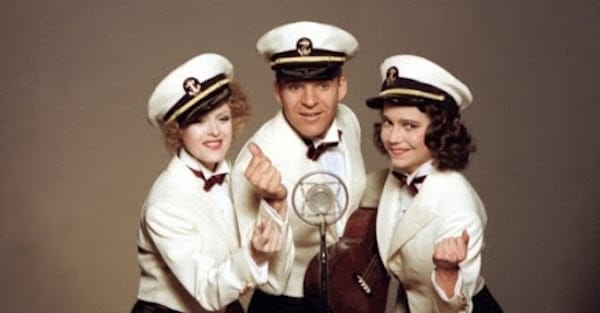 “And talk about ages, from 16 to 60!” That had it’s own challenges, recalls Mackie. “When you get that many girls, all dressed alike, and such a big age span? You put the cute young ones in the front.”

MGM executives must not have thoroughly read the script or been paying close attention to the dailies, because they didn’t balk until near the end of production. “They probably didn’t realize what kind of movie it was going to be,” Mackie says. As the last days of principal photography neared, “MGM freaked out.”

Studio execs got a look at the set for the last big number, which featured 126 dancers. “The last scene was big tap ballet, based on German expressionism, with colors, and everyone mean and violent and fabulous — the hookers, girls thrown out the windows, people selling watches.” The location set, under the 40th Street Bridge in Los Angeles, was painted blood red. “It was the worst part of town, and very realistic.” He praised Ken Adam, who was credited as a producer and art consultant, but who essentially did the work of a production designer for the movie.

Cast and crew received notice the scene was being cut, and that the new one would be shot at the MGM lot. That left Mackie and other department heads to scramble. The art department had to build a brand new set. Mackie had to redesign costumes for a set that now wasn’t blood red. “How fast? Like Thursday for Monday,” he recalls. “We had penny headdresses, all sculpted, vacu-formed with coppery sequins. It was as easy and as fast as I could to get it done.”

It was a daunting task given the previous costumes, in the works for six weeks, were in the last stages of preparation. “I remember sitting in the parking lot sewing pennies on hats,” says costume designer Daniel Orlandi. He was an assistant costume designer, and Pennies From Heaven was his first job in the industry. “I was incredibly lucky,” he says.

Having the scene cut is a memory etched in Bernadette Peters’ mind as well. “We don’t get to hear about the stress in every department,” she says, but she had her work cut out for as the star, who was then looking at a changed number. What she’s left with all these years later is the talent of people on the show, like Mackie, but also people like Ross and others who are gone now.

“That didn’t end the show well for me,” Mackie admits. “It was a funny time, everything was changing so fast.”

They probably didn’t realize what kind of movie it was going to be,” Mackie says. As the last days of principal photography neared, “MGM freaked out.”

MGM tried to make the movie more to its liking in postproduction, which ran long and cut into valuable marketing time. When it came time to release the movie, there was no time for the traditional meet-and-greet with film critics. Instead, the studio held a press conference via satellite television linked to reporters in 15 cities.

In December 1981, Peters, Steve Martin, Dennis Potter, and Herbert Ross went to WNEW studios in New York to answer questions. Video conferencing was novel then, but it didn’t impress the critics. A lot of them said they hadn’t the liked the movie. Ross, irritated, suggested they didn’t understand it. Peters and Martin, who understood how to work a room, showed more tact, and Potter, the writer, offered thoughtful explanations.

Martin took a lot of heat for being miscast. Known for comedy and fresh off his role in The Jerk, he also turned in a solid dramatic performance and was candid in the news conference about a then-pending mistake being made by the studio. MGM was presenting Pennies From Heaven as a return to its grand musicals while omitting it’s pronounced dark side. “The biggest wrong that can happen is if the audience is somehow misled into thinking this is a lighthearted-comedy,” Martin told critics.

The movie was roundly panned, but it also had its fans and people who saw Ross as making a movie that was a metaphor for life, and how a suffering public escapes through the false front of Hollywood. Pennies From Heaven had three Oscar nominations in all: the one for Mackie, another for Best Sound, and the last for Potter for best writing from previously established material. Both Martin and Peters were nominated for Golden Globes, with Peters winning. It also won Best Cinematography from the National Society of Film Critics.

Pennies From Heaven is available on Amazon Prime.