Coachella Music and Arts Festival | Phases is in the Right Place, Right Time 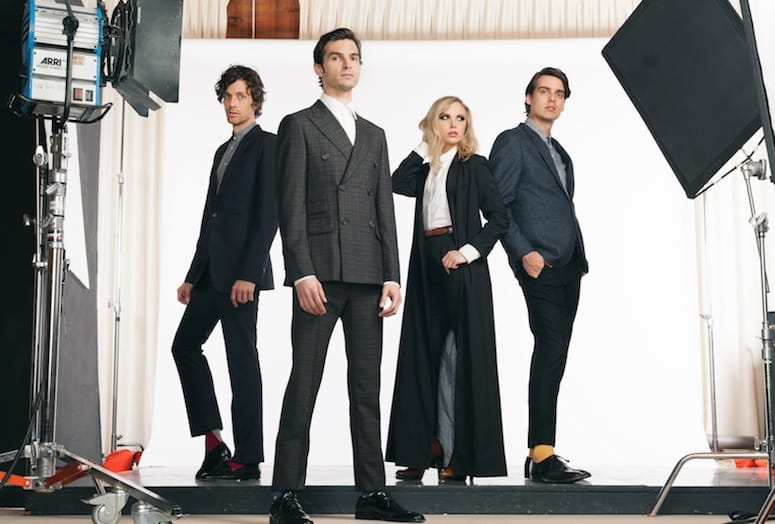 Phases may be one of the most accurately named bands out there today, as this indie electro-pop band from Los Angeles expertly mixes nostalgia for ’60s vibes with modern recording sensibilities on their kinetic debut album For Life.

“Phases is music that could only have been made and recorded now,” agrees singer Z Berg, who initially found acclaim with her previous band The Like, known for their retro-sunny 2005 pop hit, What I Say And What I Mean. “Even the writing process could only have been done now. There’s a lot of hi-fi, lo-fi, old school, and ’80s school in there too — it’s the perfect hybrid. At the end of the day, I love it all. But it’s definitely very exciting to feel you’re living in the time that you live in.”

Phases will be playing a number of songs from For Life at their Coachella debut on April 16 and 23, including the bouncy I’m in Love With My Life, the vintage Princesque Spark, and the wistful, lamenting Cooler. They may also throw in some newer selections, including their earnest cover of Justin Bieber’s recent smash hit single Love Yourself. “For weeks, I could not stop singing it,” admits Berg. “I thought, ‘You know what? I’m going to learn it so I can exorcise it from my mind.’ But when I started playing it on acoustic guitar, I went, ‘This is actually kind of sick.’ I began playing it at our acoustic shows, and it caught on like wildfire.”

Z got on the line with Palm Springs Life to discuss her longtime personal connection with Coachella, how she prepared for singing backwards in a video, and how she merged her love of the past with her zeal for the future. Today, we’re talking about Phases playing Coachella for the first time, but you also played there with The Like 10 years ago, in 2006.
“Yes I did! It was exactly 10 years ago, which is so funny. I was a wee lass, a wee lass. [Z was 19 years old at the time.] I think our drummer [Jason] Boezel has played Coachella about six times — he played with Bright Eyes, Jenny Lewis, and probably a few different incarnations of the Rilo Kiley band.”

How do you think Coachella has changed in those 10 years? It just seems to be getting bigger and bigger.
“Coachella has changed so dramatically. It just keeps growing every year, exponentially. It’s crazy. I think Coachella is the greatest festival in the world. It is my favorite, and it’s the only festival I’ll go to if I’m not playing. I love Coachella, like, really deeply. I’ve been to a lot them; it’s probably around seven times now. It’s a magic thing, though you can’t exactly explain what the magic of a desert festival is, you know? (chuckles) You’re out there at night in that warm desert air, watching your favorite band you thought you’d never see. I’ve seen some of the greatest shows of my life at Coachella, stuff that I never thought I’d see live.”

Which Coachella sets were among the best ones you’ve seen?
“I’ve seen so many unreal shows at Coachella: My Bloody Valentine, New Order, Stone Roses, Blur, Nick Cave, Sparks.”

What’s the difference between watching other bands play and performing at Coachella yourself?
“It’s definitely more stressful if you’re performing! (both laugh) If you’re just going to watch, you don’t have to worry about anything and just vibe out and enjoy it. But if you’re playing, you go, ‘Oh wow, I really have to get my sh– together. I’m not just a spectator.’ At the same time, it’s a pretty incredible honor to play Coachella. It’s amazing, the cache that it holds. When you tell people you’re playing Coachella, they’re like, ‘Whoa!’ It actually really means something at this point.

“What’s really cool is, you get excited to see new bands rather than old bands. Coachella is often about bands that have gotten back together — when I saw the Stone Roses at Coachella [in 2013], that was my dream — but this year, the bands I can’t wait to see are Børns, The Last Shadow Puppets, Grimes, Chvrches, and Beach House. Everything I want to see is new — which is good, I think. It’s good to be excited about new music.”

I totally agree. But the real tough question is, will you be able to perform I’m in Love With My Life backwards onstage like you did in the video?
(laughs) “You know, I could if I needed to! I still have it memorized backwards.”

What was the hardest thing to sing during that whole backwards sequence? You did it all for real, right?
“Oh God! You have no idea. I still wake up in cold sweats thinking about it. It was a month of coming home from rehearsal and sitting on my bed and recording it into iMovie backwards, then playing it forward and going, ‘Oh! That’s not right!’ I have like 500 of those videos in iMovie. And I’ll never get it right.

“It’s so interesting being a human. The coolest things are always the most impossible. In all the advancements we’ve made, we can make robots, but we still can’t cure hair loss, or death. That’s kind of the beauty of that video — the whole thing. Doing something backwards is so hard, and it is still so mind-blowing.”

In the days of The Like, you recorded to tape and used ’60s analog gear live. But with Phases, everything’s a little more “modern,” wouldn’t you say?
“Yes indeed! For me, I want to try to do everything in every different way possible. I like all different kinds of music and all different kinds of recording. It’s interesting — Phases is so polar opposite to the way we made The Like records, which was a band in a room recording to tape with all ’60s microphones and all ’60s gear, and all in one take. I’ve always been horrifically depressed that I don’t get to live in the ’60s for my entire life.”

I know what you mean. I have a foot in the ’60s because I was born in the fall of the Summer of Love, as I like to put it, but I basically missed out on it at the time.
“See, I missed it all! I was born in the late ’80s. My whole life, I grew up listening to The Beatles, The Stones, [Bob] Dylan, The Shirelles. I remember sitting on my bed when I was 9 years old listening to Diana Ross, and losing my mind. Because of that, I’d never really been OK with living ‘now’ and making music ‘now.’ I’ve always tried to recreate something from the past because that’s the music I love.

“But with the Phases record, for the first time ever, I went, ‘Hey, wait! We kind of live in an interesting time!’ The possibilities are endless. If you use those for good, you can make something really beautiful and amazing. That was a really big moment for me. One must not always be nostalgic for the past.”

That makes me think of a song of yours like Silhouette, which marries the ’80s and whatever we’re calling this decade, all at once.
“I appreciate that. I think every one of us in the band has a favorite decade, and we all have very disparate and eclectic tastes in music. In coming together to form this band, there are so many influences, so many decades and genres and time periods. The beauty of Phases is that we are different in so many ways that when we come together, it becomes something totally different in and of itself. There’s so much of the past in this music, but also so much of the future. And it’s our intention to diffuse those things.”