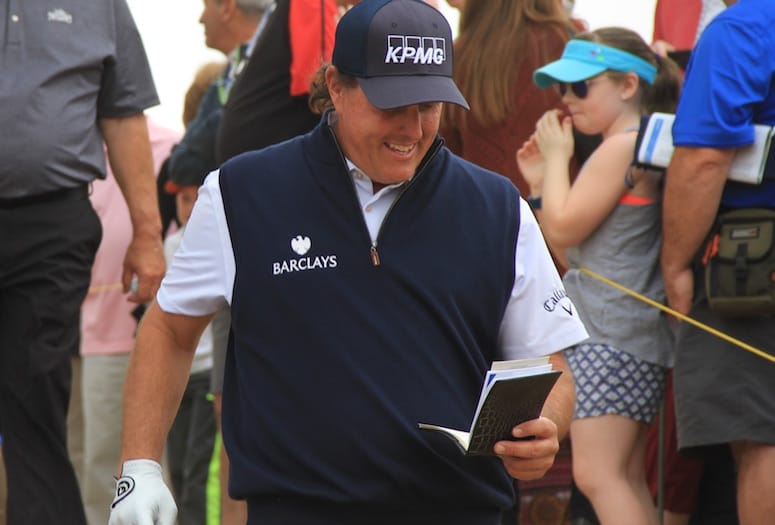 Phil Mickelson's appearance at the Careerbuilder Challenge has given the tournament the buzz officials were hoping for.
FILE PHOTO BY ERIN PETERS

Neither snow, nor rain, nor heat, nor gloom of night kept Phil Mickelson from his appointed rounds this weekend as new ambassador of the CareerBuilder Challenge golf tournament in La

He came, saw and probably won’t win. But he certainly conquered.

Mickelson, one of the true attractions on the tour with his five major titles and 42 PGA victories, was named May 18 to be the signature face of this legendary event. This is a tournament that, despite a recent revolving door of sponsorship, will always be, in the minds of most golf fans, the Bob Hope Desert Classic. And the next identifying thought of those fans, after Hope, is Arnold Palmer, who won here five times and also was the signature name for the event in the past.

So, when he agreed to become ambassador, Mickelson understood, and embraced, the stature he was being accorded. Then, along came the wrinkle.

On Dec. 12, he needed a redo of his sports hernia surgery. Now, he says, “It’s not a big deal surgery. Kind of a minor thing. Just put a mesh in.”

But at the time, one of the first things he had to confront was whether he could fulfill the commitment he made to the CareerBuilder event. There was never a question that he would be at the event. But would he be able to play? The answer was, medically it was probably inadvisable. Mickelson’s answer was, emotionally, he was going to play.

So he has, walking the fairways of The Stadium and Nicklaus courses at PGA West and the La Quinta Country Club. And so have the galleries, swarming around Mickelson and producing the kind of buzz event organizers want.

Mickelson didn’t start swinging a golf club all-out until a week ago. Once that felt OK, he decided to play. But it wasn’t until Tuesday night that he made the final decision. One can only imagine the excitement when that call came in to tournament officials.

“There’s no better place (than this desert tournament) to learn and get better,” he said, “than to come out here on these great golf courses and put it to the test.”

He shot four-under 68 the first day and said he hit it lousy, but scored “out of my mind.”

Friday, he shot 66 and said, “I hit a lot more good shots today than I did yesterday, but I’m still hitting some really bad ones.” He also called his round, the first one back since surgery, “Phenomenal.”

His summary after two days, one which is not likely to change no matter what his final score: “It’s been a fun two days.” Along the way, he has rolled in a couple of 20-foot putts and a 40-foot bomb and also chipped in out of a trap.

He held up well for awhile Saturday, but took a double 6 on the 18th hole when he hit his drive into the water and ended up wth a 73, which is nine under par and left him in 21st place heading into Sunday’s round.

No matter where he finishes, his appearance here, in the midst of his health issues was admirable. Matter of fact, it stands as the second most heroic effort of the tournament. No. 1 goes to his caddie, Jim (Bones) Mackay, who had both knees replaced about the same time as Mickelson’s sports hernia surgery.