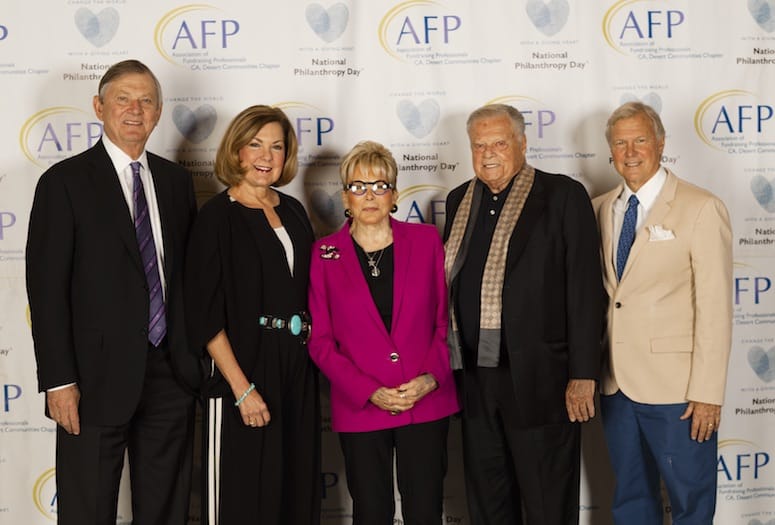 The event was attended by a record breaking crowd of 750 guests, the largest turnout in the history of this local chapter. Harold Matzner, notable Coachella Valley philanthropist and owner of Spencer’s Restaurant, returned for his seventh consecutive year as the Presenting Sponsor and honorary chair. KESQ TV’s Patrick Evans served again as emcee.

“The Coachella Valley is filled with remarkable philanthropists, making profound differences in the lives of many people,” said Brian Daly, event chair.  “It has been said that philanthropy is good will in action. If anyone would need proof of this, all they need to do is look around this room.”

Founded in 1960, the Association of Fundraising Professionals (AFP) is the professional association of individuals and organizations which generate philanthropic support for a wide variety of charitable institutions, advancing philanthropy forward through its 31,600 members in 243 chapters throughout the world. AFP works to foster philanthropy through advocacy, research, education, and professional certification programs, while promoting high ethical standards in the fundraising profession.  The AFP Desert Communities Chapter currently boasts a membership of more than 100 fundraising professionals within the Coachella Valley.

During the 13 years the AFP has hosted National Philanthropy Day In The Desert, 76 outstanding individuals, foundations, and corporations have been honored at this annual Awards Luncheon. This year’s honorees included:

“We have the good fortune to be living in not only one of the most beautiful and climate-friendly communities in America, but also in one of the most generous,” said Matzner.  “I count it a great honor to be part of National Philanthropy Day’s awards, and to be able to congratulate all of the recipients.”

The 14th Annual National Philanthropy Day In The Desert is Nov. 13, 2020. For more information on the AFP Desert Communities Chapter, call 760-449-1971 or visit afpcadesert.org.