The light in the California desert is a durational spectacle requiring time — a day, a week, a season — and patience to fully experience and appreciate. To best observe and absorb, you need to downshift to the desert’s pace, tune to its raw beauty, and lean into its tranquil and sometimes unsettling quiet. Only then can your mind and body feel the relief of leaving all signs of civilization in your dust and the awe of the vast landscape and brilliant sky that surround you.

“There are incredible natural light phenomena that happen here in the desert every single day,” says artist Phillip K. Smith III, whose all-consuming, otherworldly installations encourage people to slow down, look, and linger. “The desert can seem overwhelming and at times merciless, but the resolution is time.” 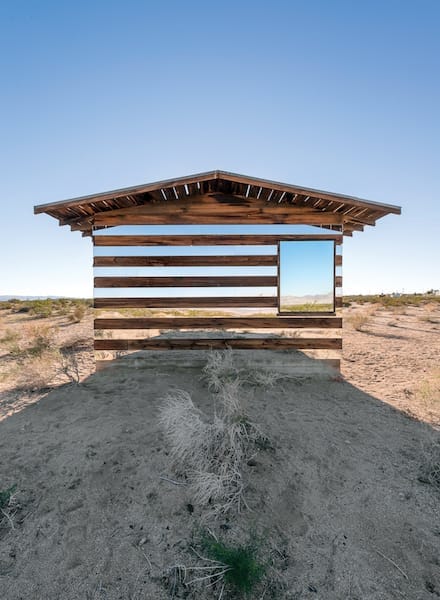 Smith, 48, who was born in Los Angeles and raised in Indio, began connecting with this land on high school hiking trips to the Mojave National Preserve and Joshua Tree National Park before he moved to the East Coast to earn degrees in art and architecture at Rhode Island School of Design and work for Boston architecture firms Machado + Silvetti, Office dA, and Dolezal Architecture + Interior Design. He returned a decade later, in 2000, and has since made the desert his home and inspiration.
“For the first three months I was back here, I would go out driving and hiking,” says Smith, the honoree at Palm Springs Art Museum’s Art Party 2023, its annual gala, on Jan. 28, 2023. The museum has also slated a mid-career retrospective exhibition for the artist, which opens Nov. 25 and runs through May 7, 2023. 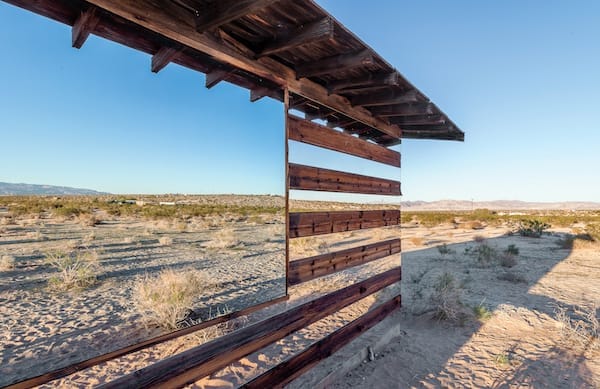 “Just being here, being present every day and witnessing what happens here, I became more aware. I came back with my eyes fully open.”

By 2005, as his studio practice was taking shape, Smith had reconnected with the desert — and doubled down on it. He purchased a 70-year-old ramshackle homestead cabin on five acres in a remote area of Joshua Tree, a dot on the vast High Desert landscape. “My prerequisites were that it was way out there and that it had all the utilities because I thought, I’m going to build my studio there one day. I wanted to be in the raw and have the experience of no close neighbors.” 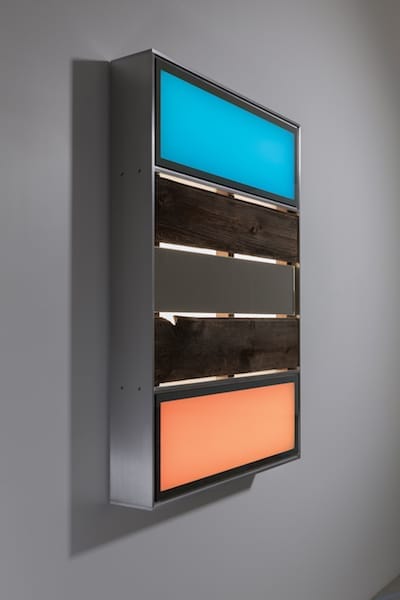 He left the property untouched over the next eight years, occasionally visiting to “just kind of be quiet and present in that place.” It proved a fertile terrain for Smith to find stimulation and imagine the possibilities for his work.

Meanwhile, he began experimenting with the ideas and materials that led to the three series that define his practice: the minimalist Light + Shadow Works, eye-popping Lightworks, and mind-bending Mirrorworks, each distilling the subtleties of light, color, form, shadow, and change. 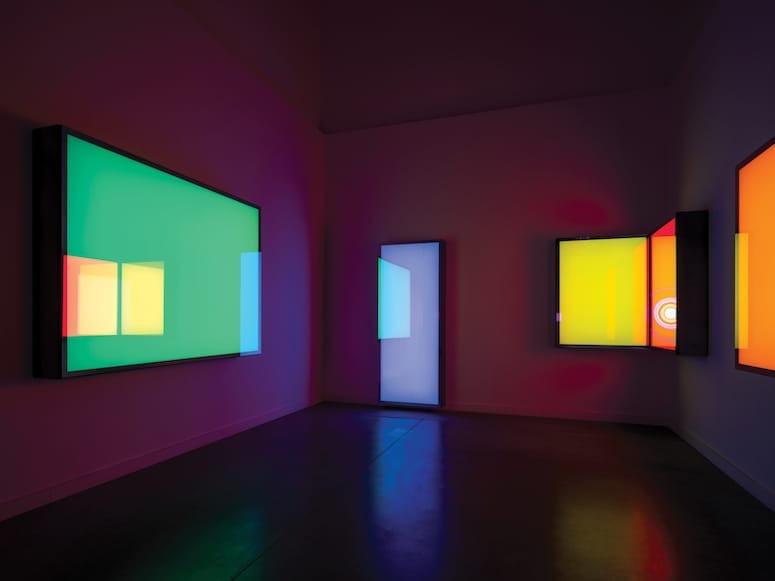 Lucid Stead: Four Windows and a Doorway cracked open Smith’s exploration of color, time, and change.
They also take their cues from the desert. The Light + Shadow Works, for example, emerged as white-painted fiberglass forms that Smith scores in geometric fashion to capture the shifting light. “It comes from those mountains,” he says, referring to the Little San Bernardinos, which he can see from his massive Palm Desert studio. “They transform every day from a textured three-dimensional surface to a monochromatic silhouette. That transformation is the inspiration for the Faceted Discs.” Likewise, he notes that the Cadiz Dunes in the Mojave Desert factored into the curved edge of the convex and concave Crease. 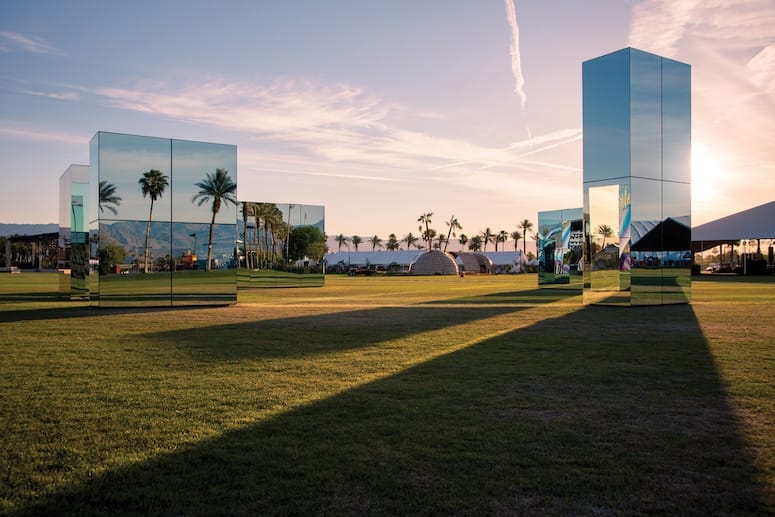 Reflection Field at the Coachella festival. 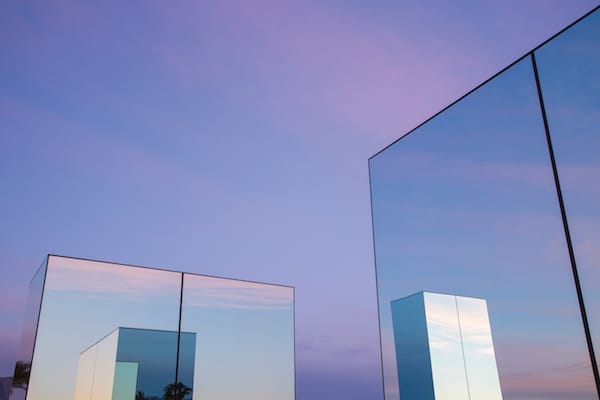 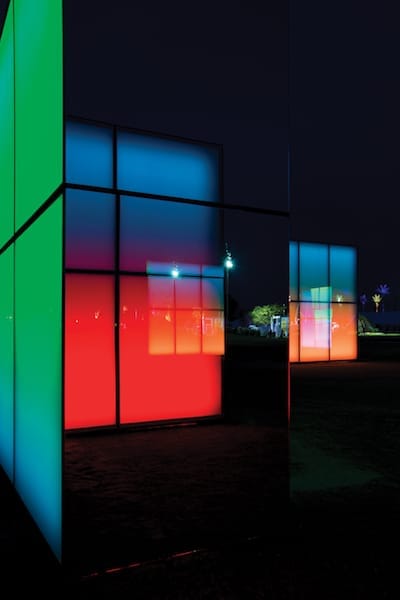 The Lightworks’ roots trace to Aperture, his first light-based installation, created in 2010, while he was the artist in residence at Palm Springs Art Museum. “Much of my early work dealt directly with light and shadow, often working monochromatically,” Smith says. “It wasn’t until Aperture that I really took on color directly.”

Aperture and a mirror-polished stainless-steel sculpture he created for a site in Oklahoma City signaled the coming of Smith’s seminal work, Lucid Stead, which would make his High Desert property a social media sensation.

In 2013, Smith, who’s married to Modernism Week executive director Lisa Vossler Smith, decided to “do something” with his High Desert cabin. In the studio, he began experimenting with photographs of the dilapidated structure and creating the first renderings of what would become Lucid Stead. “I’m a believer in the brewing process,” he says. “I didn’t draw on that thing for eight years, and then one day it just was like, boom, there it was.”

Lucid Stead came to life as an ephemeral monument to the desert’s light — a weathered wood shelter with polished mirrors replacing the door, windows, and every other horizontal beam to reflect the surrounding landscape by day and project fields of color by night.

“It’s about four ideas: light and shadow (the interaction with the sun), reflected light, projected light, and change,” explains Smith, his buzzed head showing a hint of gray. “It varies dramatically from sunrise to 9 a.m., to noon, to 3 p.m., to dusk and into the evening. At dusk, there’s the reflection of the sun within it while the windows and doorway slowly shift through the color wheel powered by LEDs. The projected light comes from the interior and reveals the structure — the two-by-fours, the diagonal bracing — as lit lines that wrap around the shack. The four windows and doorway, you’re not fully aware that they’re changing. It’s about slowing down, stopping, and being quiet so you can see and listen.”

About 400 people came from far and wide to see Lucid Stead in its radiant splendor — other artists, collectors, curators, and the curious. They braved driving on dirt roads and endured heat, cold, and wind to watch, for hours at a time, as the structure absorbed the desert’s light and landscape and brilliantly projected it back. An online video of the project clocked more than 300,000 views. “It was amazing to have so many people embrace the project,” he says.

For Smith, the project was generative, instigating successive studio works, including Lucid Stead Elements and Four Windows and a Doorway, as well as monumental public installations.

Smith’s trajectory of studio and site-specific art draws from several genres, including minimalism, abstract geometry, and light and space, a movement formed in the late 1960s focusing on perceptual phenomena; artists such as James Turrell, Robert Irwin, and Larry Bell made light their primary material. 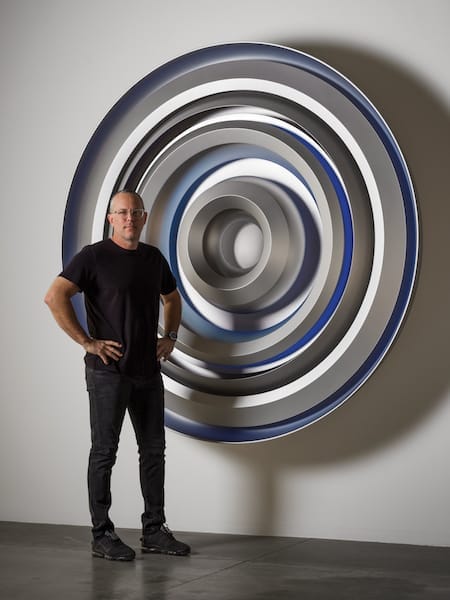 Smith in his Palm Desert studio with one of his Lightworks.
“So much of the work that inspires me from those movements is about distillation of thought —spending enough time with an idea to reveal the core truth,” he says. “For many artists, this navigation was able to progress only as far as the technology of the time. The arsenal of tools that I use now was never available to most artists of the ’60s and ’70s. My own arsenal has drastically changed over just the last 10 years.” 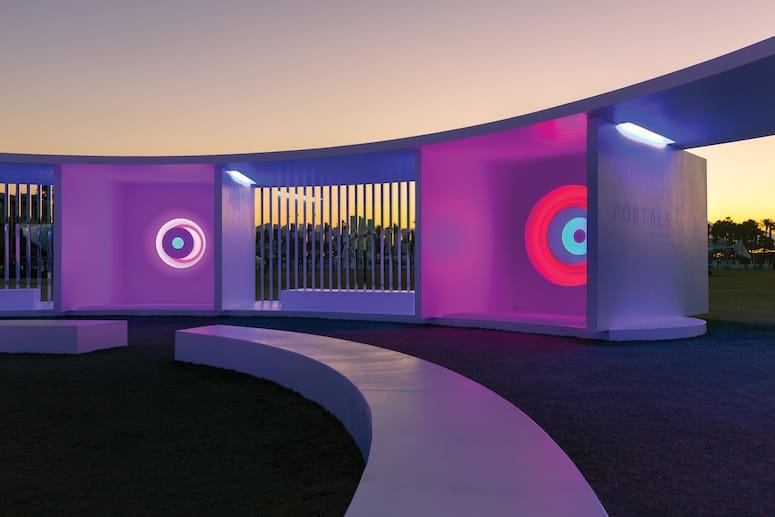 Portals offered Coachella fest attendees a place to take a visual trip.
One of the people who saw Lucid Stead in person was Paul Clemente, art director of the Coachella Valley Music and Arts Festival, who commissioned Smith to create the more ambitious Reflection Field on the grounds of the Empire Polo Club in Indio the following year. It consisted of five “volumes of light” — four enormous square structures and a two-story-tall rectangle — each with mirrored surfaces reflecting the landscape and activity by day and bathing festivalgoers in slowly changing, LED-powered color by night. 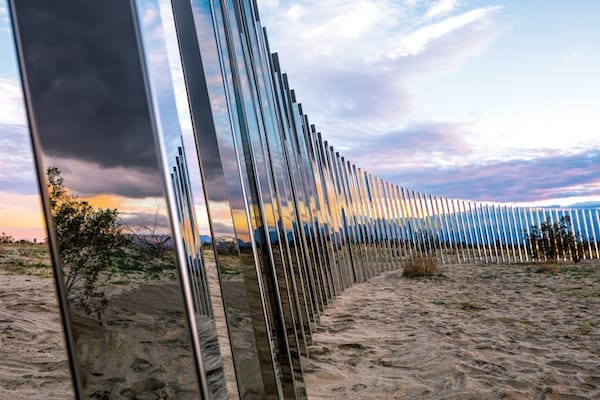 The Circle of Land and Sky, created for Desert X in 2017, reflected the land as you approached the circle and the sky as you stood inside of it.

“If you step up close and look straight forward at yourself and the world around you, you are immersed in that color beyond your periphery,” Smith says. “If you hang out long enough, there’s a moment when your brain begins to question which side that you’re on. You know that world: It’s right behind you — or is it in front of you? This kind of immersion is something that I’m very interested in.”

Smith returned to the festival in 2016 with a circular pavilion structure, Portals, 85 feet in diameter, reflective on the outside and pulsating with light on the inside, where a series of wall-mounted hypnotic, circular Lightworks, each contained in its own white cubical space, held visitors in place and in awe.

Both installations offered a space for people to disconnect from the stages, DJ tents, and crowds and have an immersive visual experience — and great backgrounds for selfies.

For his next public installation, 1/4 Mile Arc, Smith planted 250 mirrored reflector posts into the sand in Laguna Beach, virtually collaging the ocean and the city. 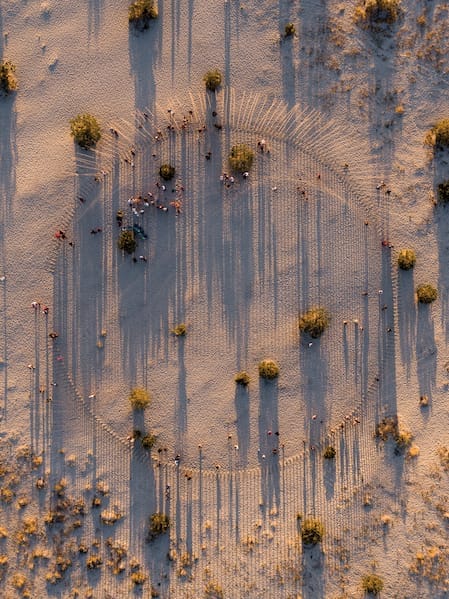 He created a similar work, The Circle of Land and Sky, for the inaugural Desert X exhibition of site-specific art in 2017. Situated in Palm Desert, the piece consisted of 300 polished-mirror posts angled at 10 degrees to reflect the land when viewed from the outside of the circle and the sky from the inside. They appear to pull the sky down to the land and lift the land up to the sky, and continually change with the natural light, reflecting the colorful sunset, when the biggest crowds would gather.

Anybody can approach and enjoy these installations, but those who linger the longest glean the greatest effect. “I’m tapping into a universal beauty,” Smith says. “I’m interested in creating opportunities for interaction and continued discovery. I’m interested in the work being in a state of change so that the experience is never the same. There’s a curiosity about what happens next.”

To achieve that impact, he works in monumental scale, consuming acres of space and also going vertical, sometimes higher than 40 feet.

“If I’m going to create in the desert environment, or at the edge of the ocean, the artwork can’t be a blip on the horizon,” explains Smith, who has also installed large-scale
temporary pieces in Miami Beach and Milan, Italy. “It must be an experience worthy of that place, worthy of the trip, and worthy of the time. The Circle of Land and Sky needed to be big enough to invite the desert in, yet intimate enough to feel like a sheltered space within that environment. It has to be powerful and memorable.” 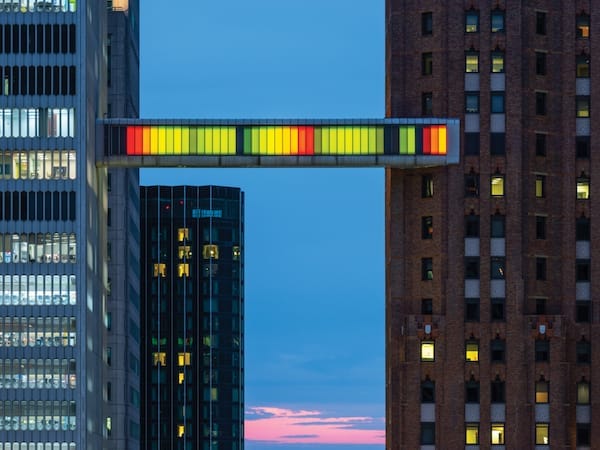 As Lucid Stead and more recent projects demonstrate, Smith’s architecture background gives him a technical edge as well as the confidence to create in the most improbable places and unlikely sites. Detroit Skybridge, for instance, connects two of the Motor City’s most iconic skyscrapers at the 16th floor with a light installation that activates a 100-foot-long walkway that had been shuttered since the late 1990s because of low traffic.

Now, it looks like a UFO landing in downtown with its colorfully choreographed lights.

Currently, he’s reimagining the 1920s façade of The Newark Museum of Art in New Jersey with a two-story-tall light installation called Three Half Lozenges. It will appear in the windows of the building, mimicking the form of the vertical Lozenge pieces from the Lightworks series, each with a centerline of color and a body color that wraps around.

“They were renovating the façade and redoing the second floor,” he says. “As I was touring through the building, all the galleries were framed without any drywall and you can look through and see the backside of the windows. I asked, ‘Are you using those windows?’ They’re like, ‘No, not at all.’” A month and a half later, he proposed Three Half Lozenges, which debuts Oct. 9. “You will see this at night. All three of the two-story windows will transform via slowly shifting color starting at sunset, allowing the museum to have a new presence in a city going through positive change. It presents the museum in a totally new way.”