Pickleball Popularity Means More Courts For Them in Palm Springs 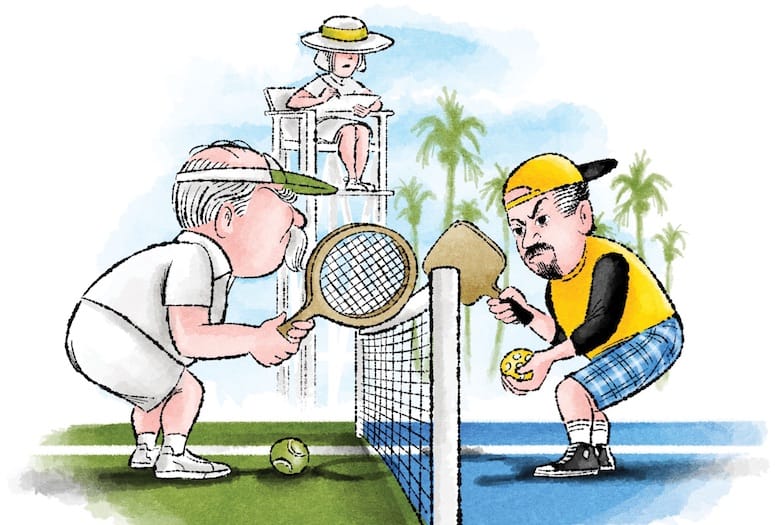 Tennis court action around the Coachella Valley has a long history of raising tension, emotion, and excitement, but never more than it does right now, as the stakes appear greater than ever — teetering on existential, some suggest. The game’s purists and most devoted players say waves of pickleball players have been taking over the courts throughout the desert, leaving them a diminishing number of places to play.

They say the pickleballers, or picklers, invade their space, damage the courts, make noise, and disrespect tennis players. The pickleballers fire back, asserting that their sport — the new game on the block for almost a decade — has become more popular, and tennis players should get over themselves.

That kind of talk infuriates tennis players, sending them barking to parks and recreation authorities, appearing before city councils, or questioning the moral compass of tennis directors at local country clubs and hotel properties.

First World problems, for sure. But when you live in the resort communities of Greater Palm Springs, you want quality of life. And if you can’t play your game where and when you want, your quality of life suffers.

“There are definitely two sides to the pickleball versus tennis debate,” says Greg Felich, the tennis pro at Rancho La Quinta Country Club. “A lot of oldtime tennis players say pickleball is way too noisy and overly social.” But many other old-timers have taken up the newer sport because it’s easier to play and arguably less taxing on their aging bodies. And younger folks like to play, too.

Participants often describe pickleball as a quirky mix of other paddle and racket sports. Doug Howarth, vice president of the Pickleball Club at Outdoor Resort Indio, says it’s “a combination of racquetball, badminton, and table tennis,” while Blake Wilcox, director of tennis and pickleball at Andalusia Country Club in La Quinta, calls it a blend of tennis and pingpong — “but you are standing on the pingpong table,” he says.

There are differing theories about the name of the game, which according to the USA Pickleball Association was invented in 1965 by three dads on a ferry ride from Seattle to Bainbridge Island. But the rules are crystal clear: As in tennis, players compete in singles or doubles, but in the new game they use a paddle and a whiffle ball on a 20-by-44-foot surface that looks like a miniature tennis court with baselines and sidelines. And they serve underhand.

The USAPA estimates that 3.2 million people played pickleball on 15,000 courts around the country in 2018, a 12 percent increase in participation over the previous year. Local, regional, and national competitions take place year-round, and the USA Pickleball National Championships returns for the second time Nov. 2–10 to the Indian Wells Tennis Garden. (A five-year agreement with the USAPA keeps the tournament here through 2022.) The 2018 event was the largest tournament in the sport’s 54-year history, with more than 2,200 players competing for $75,000 in prize money.

While pickleball has been around the desert for only six years, tennis has a long and distinguished history here, including the memorable 1978 Davis Cup final at Mission Hills Country Club, where the U.S. team won with John McEnroe and Brian Gottfried in singles and Stan Smith and Bob Lutz in doubles. Other legends that have competed on local courts in the 1960s, ’70s, and ’80s include Rod Laver, Jimmy Connors, Björn Borg, Chris Evert, Martina Navratilova, Billie Jean King, Ivan Lendl, José Higueras, Roscoe Tanner, Ken Rosewall, and Virginia Wade. Today, the top men and women in the game compete in the annual BNP Paribas Open in Indian Wells. 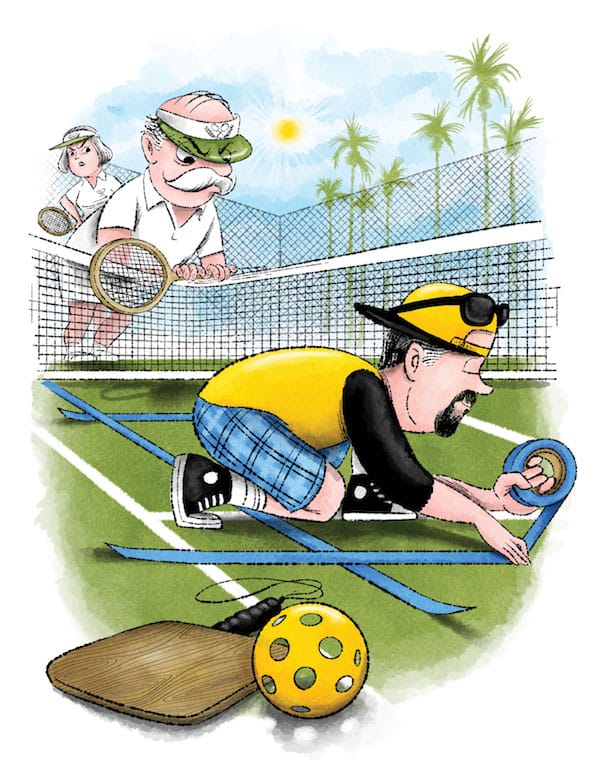 “They were basically defacing the park. Many of us tennis players objected vehemently. We were angry. Furious.”

So it’s understandable that the game’s purists sometimes bristle at the rowdy noise, ragtag apparel, peculiar paddles and whiffle balls, and the occasional use of sports tape to mark boundaries. Indeed, tennis players now often find themselves on the outside of the courts they once commanded.

David Hamlin, a Palm Springs author who has played tennis for most of his 73 years, became an outspoken critic of the new sport when pickleballers came to Ruth Hardy Park in Palm Springs. “Pickleball players comandeered the tennis courts at Ruth Hardy,” he says. “They brought their own tape and their own nets, and they were basically defacing the park. Many of us tennis players objected vehemently, and we complained to the parks department. We were angry. Furious.”

The debate played out at Palm Springs City Council and Parks and Recreation meetings, where tennis players made the word “defacement” their mantra.

“The tape they were putting down [to mark the pickleball boundaries] was baking into the courts so that even after they removed it the lines could still be clearly seen,” Hamlin says. “It was rude what pickleball players were doing, defacing the courts and taking over. There was a real sense of entitlement on the part of these folks, and it was disturbing the general ambiance of Ruth Hardy. There was a lot of anger and hostility.”

After two long and rancorous hearings, the city determined that the courts at Ruth Hardy would be for tennis only, while two of three courts at nearby Demuth Park would be designated exclusively for pickleball use, and a third would serve both sports — a decision Hamlin says pleased almost everyone.

VIDEO: Listen to players talk about the popularity oof pickleball prior to the National tournament held in November 2018 in Indian Wells.

“The pickleball players, to their credit, have stayed away,” says Hamlin, who concedes he is becoming more accepting of the game. “Now everyone is getting along.” Wilcox suggests that the popularity of pickleball traces to its ease of entry. “It is much easier than tennis, and it brings in a new clientele: They don’t play tennis and they don’t play golf,” he says, noting that Andalusia Country Club added four pickleball courts last season bringing the total to eight.

“I’ve been around tennis for 50 years, and since I went into pickleball six years ago, I have had a blast,” Wilcox adds. “I love it, and the pickleball crowd is much more welcoming to the idea of getting new people into the sport; tennis is not always as welcoming to its new players.”

Likewise, Felich, the Rancho La Quinta Country Club pro, who also manages two clubs in Lake Tahoe that both offer tennis and pickleball, says supply and demand will ultimately determine how courts will be assigned. “Let’s say two 40-something parents walk in with their two 12-year-olds who haven’t played either sport. If the kids walk onto a tennis court, having had no lessons, they are not going to be able to play. But if those same two kids try pickleball, they will learn right away. That family is going to come back to our club five consecutive days, because the kids have instantly found a sport they can play.”

According to USAPA statistics, 75 percent of the sport’s core participants are age 55 and older. They prefer pickleball because the smaller courts literally put the game within their reach. “And it is a very quick game, which is extremely good for hand-eye coordination, especially as we get older,” says Judy Hirsch, a La Quinta resident who has played tennis for the past 40 years and learned to play pickleball near Sacramento 12 years ago.

Hirsch introduced the sport to some of her tennis-playing friends at PGA West. “Now we have 16 pickleball courts and seven tennis courts,” she says. “I enjoy both. I know some tennis players complain about picklers taking over their courts, and some complain about picklers being louder and much more talkative, but that is part of pickleball. There is a lot of laughter and talking and kibitzing between the players, and I really enjoy all that.” 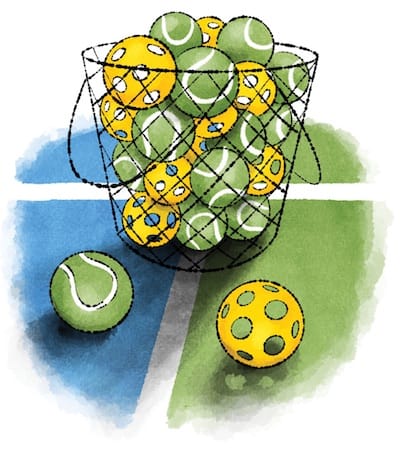 “There is a lot of laughter and talking and kibitzing between the [pickleball] players, and I really enjoy all that.”

But Wilcox warns that pickleball players get injuries like athletes in any other sport. He had never suffered an injury playing tennis but needed knee surgery after playing the “easier” game. “People think it’s a small court, so it must be easy to get to the ball, but it creates a lot of wear and tear,” he says. “My surgeon said he has more pickleball surgeries than any other sport.”

Felich’s doctor explained pickleball players often have to lean and stop short for the ball, and they tend to fall over and hurt or break wrists more than tennis players. “A doctor told me that the No. 1 injury in all of the Coachella Valley is wrist injuries from pickleball,” he says.

Hirsch constantly reminds players to avoid certain shots to prevent injury. “This also is a good way to make the picklers rely on their footwork,” she points out.

She says there’s genuine excitement around pickleball, and (sorry, tennis players) the game is still gaining momentum. Those who play evangelize the sport, and the wave of new participants increases demand for local courts. “I think that is a fabulous plus that the national [championships] will be held here again,” Hirsch beams. “It says a lot about its growth right here in our backyard.”