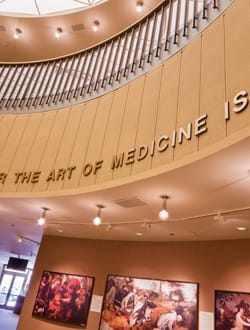 Virginia Sandler recalls climbing high up a ladder in the Sistine Chapel to view Michelangelo’s brushstrokes close up.

“[The Vatican] wanted to give us a treat,” she says of her trip to Italy on behalf of the Annenberg Center. Sandler and her late husband, Michael, also traveled to France, Spain, and England in the 1980s to find artwork appropriate for the medical education building on the Rancho Mirage campus of Eisenhower Medical Center.

Walter Annenberg believed that “great art should serve as educational tools not only for scholars, but also for the public.” And so, in addition to funding the start-up of the Annenberg Center, he and his wife Leonore funded the acquisition of reproductions of paintings illustrating the link between art and medicine.

An artist and personal friend of the Annenbergs, Sandler got the job one day at Sunnyland estate.

“Ambassador Annenberg asked me if I would be the art consultant, and I said, ‘Holy cow,’” she recalls. For the next five years, she poured over art books, visited museums, and wrote letters.

“The very first [acquisition] was [Rembrandt’s] The Raising of Lazarus from the Los Angeles County Museum,” Sandler says. “I was excited that I had gotten one; and from then on, I felt like I knew something. So I went to libraries and looked at all the books. I did it without a computer.”

More than $250,000 worth of art now hangs in the rotunda and hallways of the Annenberg Center. The 130 works range from Pieter Brueghel the Elder’s Triumph of Death (1560) from the Museo Nacional del Prado in Madrid, Spain, to Andrew Wyeth’s Children’s Doctor (1949) from the Brandywine River Museum in Pennsylvania. Other works came from The Louvre, National Gallery of Art, The Royal Collection of Her Majesty Queen Elizabeth II (studies by Da Vinci), Royal Cabinet of Paintings at The Hague, The Metropolitan Museum of Art, and other notable institutions. Sandler says her requests were always fulfilled.

“It was just like magic,” she says. “Everybody was very cooperative, because I always said it was for education.” Even Pope John Paul II happily granted permission for the Annenberg Center to reproduce a section of Michelangelo’s The Creation of Man painted on the Sistine Chapel ceiling. Sandler calls that acquisition “the big one” — and not only for its 10-feet-by-22-feet size.

In 2002, the Annenberg Center published The Art of Medicine, a book presented to visiting dignitaries that showcases 85 of its reproductions with explanatory text.

“These images represent not only medical conditions and treatments, but also the state of mind: how people of an era viewed sickness and health, death and life,” Annenberg states in the book’s preface. “Visitors to the Annenberg Center can benefit from and enjoy these works because they tell the greatest tale of all: the story of the human condition.”

For a history on the Annenberg Center for Health Sciences, click here

25 Years of Healthy Living: A Timeline