The Margherita at Piero's PizzaVino in Palm Desert.
PHOTOGRAPHS BY NATE ABBOTT

If you grew up in America, you’ve likely had your share of pizza — foldable, New York-style slices from the local pizzeria on the way home from school, Chicago deep dish with the family on a Friday night, or a any number of soulless, rubbery assembly line pies in your dorm room. But, back then, you probably didn’t indulge in anything that resembled the real-deal classic pizzas served in Italy, like traditional pies that originated in Naples, the city many credit with crafting the world’s first pizzas centuries ago. Neapolitan pies are revered for their perfectly chewy crust and fresh, super-simple but high-quality ingredients, all baked at lightning speed in a frighteningly hot wood-burning oven. Over the last two decades in the United States, a breed of pizza “joint” has emerged — bustling hot spots with pies inspired by that coveted Neapolitan style. Think: Nancy Silverton’s Pizzeria Mozza in Los Angeles and Newport Beach or Chris Bianco’s Phoenix-based Bianco empire. All have turned thin-crust Neapolitan-ish pizza into an art form, not to mention something for which diners are willing to line up and shell out 25 bucks.

You can find a few of these places in the Coachella Valley, too. Pizza makers such as Birba in Palm Springs, Piero’s PizzaVino in Palm Desert, and Sirocco Pizza Company in Indian Wells offer a variety of Italian-style pies, churning out the kind of classic Margherita you’d find at a pizza place wedged within a bustling Italian piazza as well as their own creations, which could be topped with butternut squash or braised chicken. 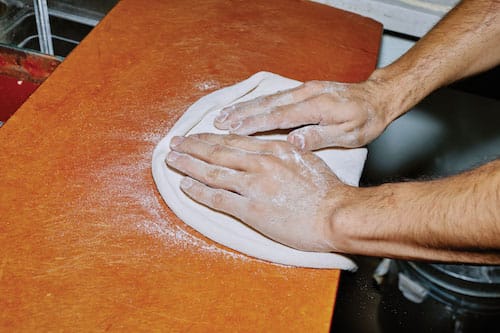 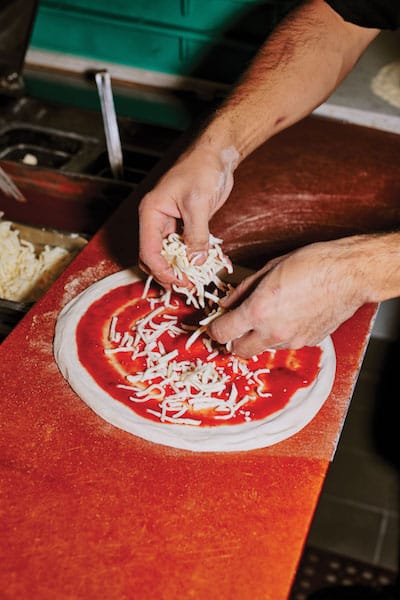 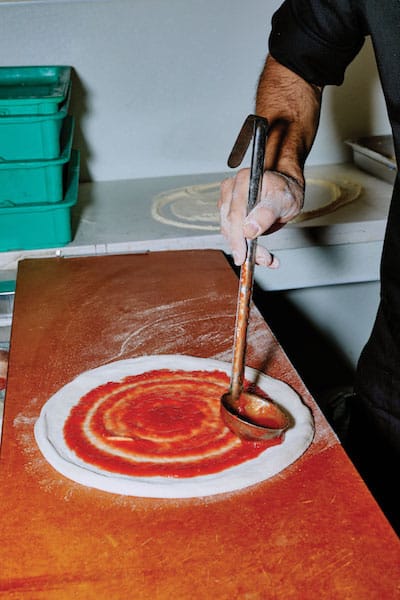 “I’ve seen the evolution,” says Peppe Miele, president of VPN Americas, the U.S. delegation of Associazione Vera Pizza Napoletana, a group that works to protect and promote true Neapolitan pizza and trains future pizzaiolo at its academy in Los Angeles. The group also provides certification to pizzerias that meet a strict set of standards and requirements for making Neapolitan pies, an exclusive club that currently totals less than 1,000 member restaurants around the world. “In the last 10 years, especially, a lot of people are looking to make Neapolitan pizza. It’s become a bit of a trend. Young chefs especially are attracted because a lot of them like going back to the old style right now.”

In Naples, you find two types of pizza at a Neapolitan-style pizzeria: Margherita (topped with tomatoes, cheese, basil, and olive oil) and Marinara (which forgoes the cheese), but Miele says there’s nothing wrong with chefs putting their own spin on the style. “A lot of them are mixing gourmet-type, California-style pizza with Neapolitan-style dough and topping them with Alice Waters organic ingredients,” he says. “But it’s really about the quality of the dough and how you cook it.”

The short list of what goes into the perfect pie may sound simple, but the process of making one — from procuring ingredients to the science behind the dough to the pie’s time in the oven — is anything but.

While the dough is typically only water, yeast, salt, and flour — usually the super fine Double Zero type — it takes years to master the hydration, rise time, and texture to get a crust with a golden color, light blistering, and just the right level of softness so that it bounces right back — like pressing a garden hose with your finger, Miele says.

“The dough, to me, is like a flower,” says Erick Rivera, executive chef of Piero’s PizzaVino, who trained under the restaurant’s late owner Piero Pierattoni. (Pierattoni’s widow, Sherri, runs the restaurant now.) “You’ve got to take care of it like it’s alive and then it blooms.” Piero’s kneads its dough in a mixer imported from Italy and then gives it three days to rise in a dedicated 45-degree refrigerated room. “We have someone who keeps an eye on it so we always have three-day dough ready to go. It’s very tricky, but the dough is the key.”

At Birba, the modern Italian patio restaurant in Palm Springs’ Uptown Design District, the pizza offerings are the result of owner Tara Lazar’s open-minded perfectionism. “We’ve experimented with everything from using mothers to 48-hour rises to 24-hour rises to two-hour rises to Double Zero flour to all-purpose flour,” says Lazar, whose restaurant is equipped with a wood-fired stone oven. “I like where our pizza is now. I would say it’s a blend of Neapolitan and regular Italian pizza. We’re back to a Double Zero and we do a 28-hour rise. I think we get it a little more leopardy, that black along the crust I really like, and there’s a really nice chew to it. I think you need the Double Zero to get the chew.” 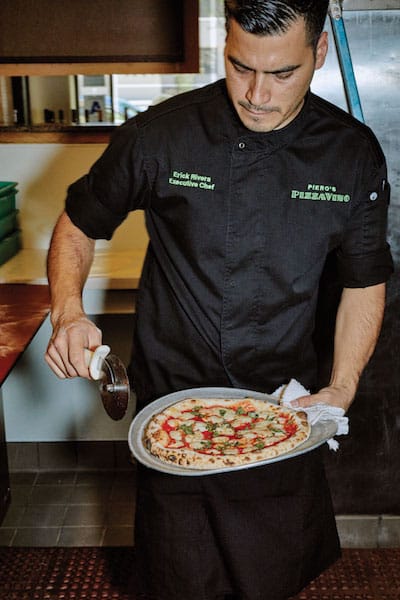 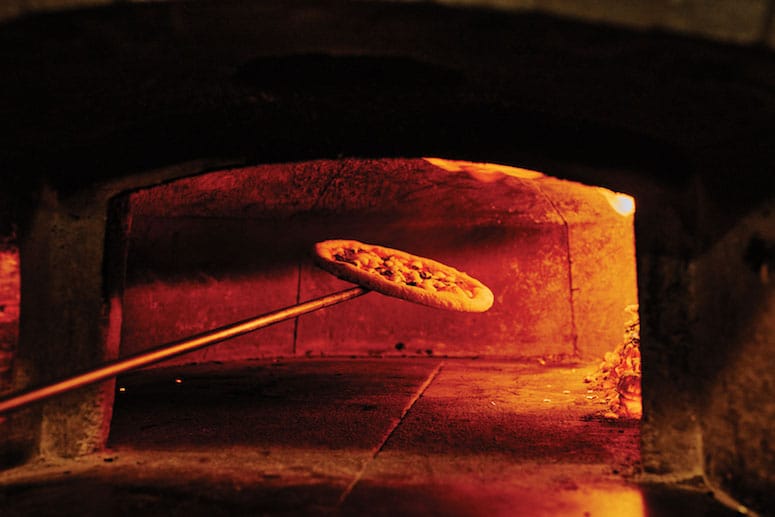 Imported canned San Marzano tomatoes are often the go-to for Neapolitan pies, but the most important factor, Miele says, is that they’re good-quality plum tomatoes cultivated in proper conditions.

“We used to use a San Marzano tomato and now we use a California tomato,” Lazar says. “It has a really nice tartness. I would say it’s a little brighter.”

Both Piero’s and Birba follow another non-negotiable Neapolitan standard: not cooking their tomatoes. The sauce doesn’t touch any heat until it goes into the oven atop the dough.

“We just blend the tomatoes with salt and pepper,” says Rivera, who uses San Marzanos. “That way, you have the full flavor of the tomato, the raw flavor. Italian food is really simple. It’s always been like that.”

The pizzas’ cheese component is traditionally simple, too. Classic Neapolitan Margherita pizzas call for fior di latte, a firmer version of mozzarella that releases less water (and one that Piero’s uses on many of its pies), but Miele says any fresh cheese that’s not industrial or overpasteurized can yield a solid pie. 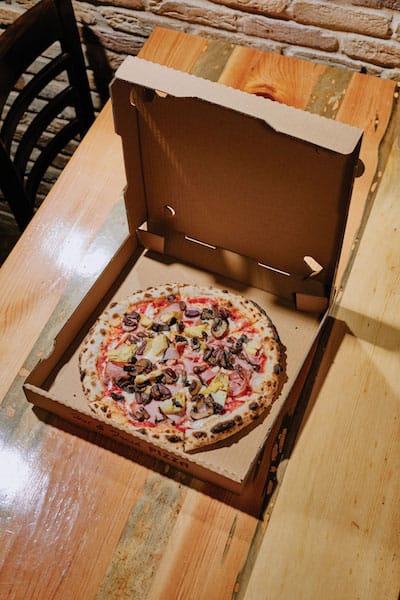 None of the ingredients will matter if the pizza is burned to oblivion. Cooking a pizza properly in ovens that can reach 900 degrees might be the toughest part of the pie-making process. At Piero’s, Rivera burns walnut and almond woods to heat the oven to around 750 degrees, imparting a smoky flavor and making it so that single pizzas only need two minutes to cook. Usually. “It’s by eye,” he says. “The more you make, the cooler the oven gets. You have to keep putting in more wood, but if you have too much wood you can burn the pizzas. It’s like a science.”

Like so many things in life, once you master the technique, you can start coloring outside the lines. While Piero’s does a variety of pies with dozens of ingredients, including housemade meatballs, crispy speck, and smoked salmon, Rivera says he’s learned that not measuring toppings, sauce, and cheese makes for a better final product. “We don’t portion anything because I want [the kitchen staff] to get involved in what they’re doing,” he says. “I don’t want robotic stuff. When they’re making and creating something, it takes love and care. It sounds very romantic, but it’s true.”

Though the Margherita and sausage-mushroom pizzas are Birba’s biggest sellers, Lazar still comes up with out-of-the-box combinations regularly, both for menu staples like the braised greens pizza done with olives, zippy chiles, and smoked cheese and for special pies that she tops with whimsical combos like blueberries and porcinis.

“In my menu-designing mind, I always think it’s nice to have some things that show we have culinary creativity. Even if people aren’t going to order that much of it, they feel they’re in a more food-forward place if they see it. I always have something that’s very niche, that you’re not going to see everywhere.”

• Where to Order Pizza in the Desert? Check Our Suggestions.