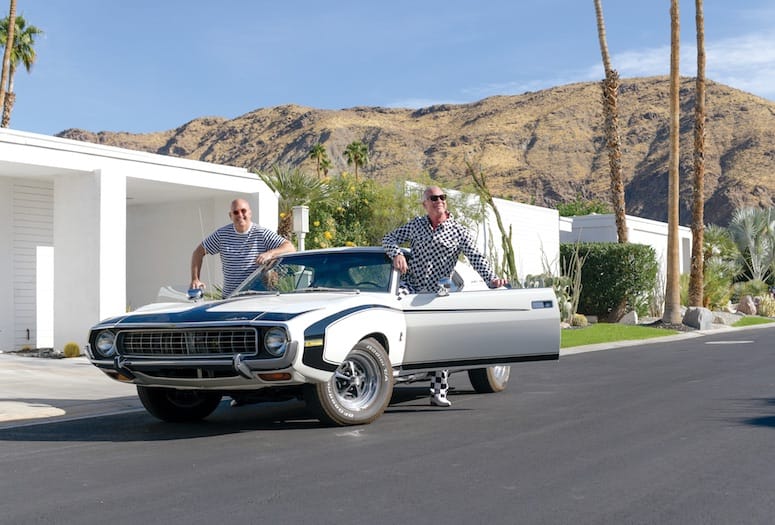 You remember that scene in Citizen Kane when Orson Welles, playing a thinly veiled William Randolph Hearst, drops a snow globe as he’s dying and murmurs a single mysterious word: “Rosebud”? Nobody knows what Rosebud means. Not his wife, his friends, his business associates. Turns out Rosebud is the name of his childhood sled and, for Kane, represents a time before everything started to, you know, get out of hand. Way out of hand.

Rosebud for Palm Springs filmmakers P. David Ebersole and Todd Hughes, whose documentary House of Cardin about the fashion icon Pierre Cardin is among the selections at this month’s Palm Springs International Film Festival, isn’t a sled but something just as simple — a coffee table. A round coffee table.

“About five years ago, we decided to move to Palm Springs from Silver Lake and bought this big, beautiful Krisel house in the Indian Canyons neighborhood, and I just knew that we needed a circular coffee table to go with our circular couch,” explains Ebersole, wearing a vintage Cardin tie, very loosely knotted, over a pink Polo shirt as we sit on said circular couch admiring said circular coffee table. “I spent hours online trying to find this one particular round coffee table designed by Pierre Cardin. But it was like a unicorn; it didn’t seem to really exist.” 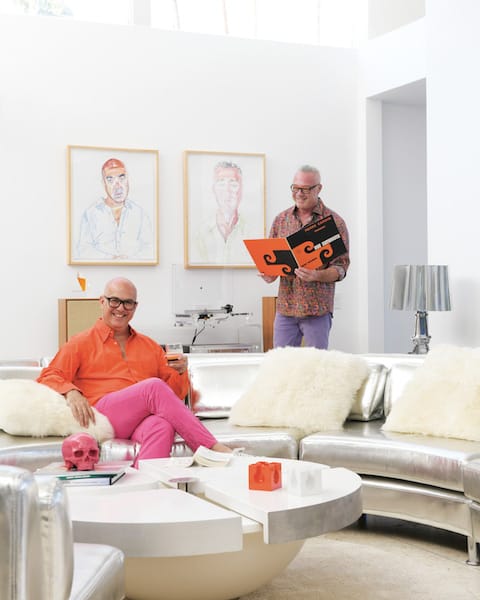 So Ebersole posted a plea on his Facebook page: This is my dream coffee table; help me find it! Lo and behold, a writer friend of theirs looking for any excuse to procrastinate, spent days searching online for the elusive round table, and eventually one turned up in England. The coffee table was a Cardin prototype — one of only four made — and cost a small fortune. But Ebersole and Hughes had to have it, so they bought it, shipped it to L.A., and giddily picked it up from U.S. Customs on Thanksgiving weekend several years ago.

“And that,” says Ebersole, who could pass as Huell Howser’s younger, better-looking brother, “is how the whole thing started.” By which he means how the married filmmakers started collecting all things Cardin — lamps, end tables, a credenza, playing cards, vases, backgammon set, pens, and other objects and accessories. For Ebersole and Hughes, who describe themselves as “Cardinophiles,” things were starting to get way out of hand.

“We’re hi-fi fanatics, so when we found he’d designed a hi-fi, we had to have that as well,” Hughes says while carefully putting on a Coleman Hawkins and Louis Armstrong record that was put out, of course, on Les Disques Pierre Cardin records in 1973. (Yes, Cardin also had his own record label, and Ebersole and Hughes search out his records whenever they’re in London or Paris.)

Then, there’s the Pierre Cardin-designed car — a 1972 AMC Javelin that Ebersole and Hughes found in Canada. Of course, they had to have that, too. So they bought it, transported it, and now gleefully tool around Palm Springs in it like frat boys cruising down Palm Canyon Drive in a souped-up GTO during spring break. 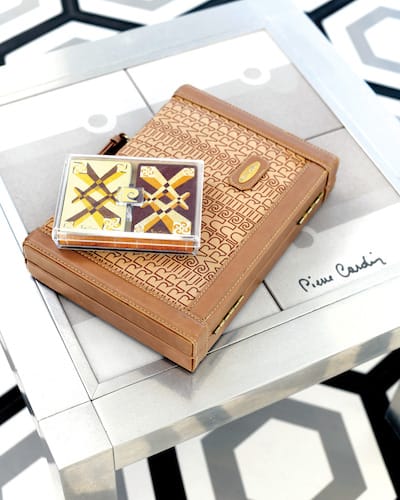 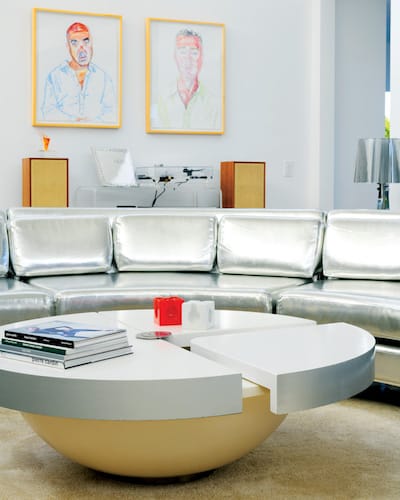 This is all before they’d ever met Cardin — before they even knew Cardin even existed. Hughes gets up from the circular silver couch to put on a vintage Dionne Warwick album. (Warwick, we discover in the documentary, credits much of her success in Europe to the gowns Cardin designed for her — including a slinky sequined purple number that she wore for the album cover of Make Way For Dionne Warwick in 1964.) He says, “We were collecting all this Cardin stuff and not once had we stopped to wonder who, exactly, is Pierre Cardin? Where did he come from, what did he look like, was he even still alive?”

Turns out he was, and he is. And Ebersole and Hughes just happened to meet him — after they’d turned their Palm Springs home in to a sort of pop-up Cardin museum. 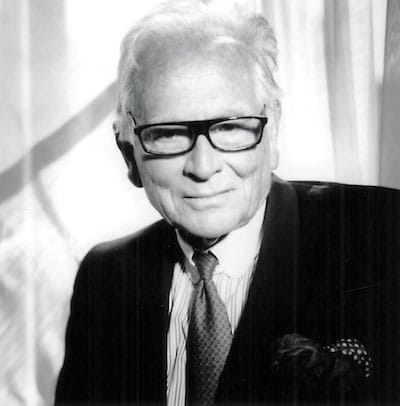 For this part of the story, we need to travel with the boys to Paris, where they are meandering through the Right Bank neighborhood of embassies, deluxe hotels, and luxury shops when they stumble across Cardin’s flagship boutique on Rue du Faubourg Saint-Honoré. Of course, they have to stop in. When they show a sales clerk photos on their phone of their unicorn coffee table and their stereo and their ridiculous AMC Javelin, the clerk says, “Oh, you absolutely must meet Monsieur Cardin!”

Wait, Ebersole and Hughes are thinking — You mean there really is a Cardin? And he’s alive? And we might be able to meet him? 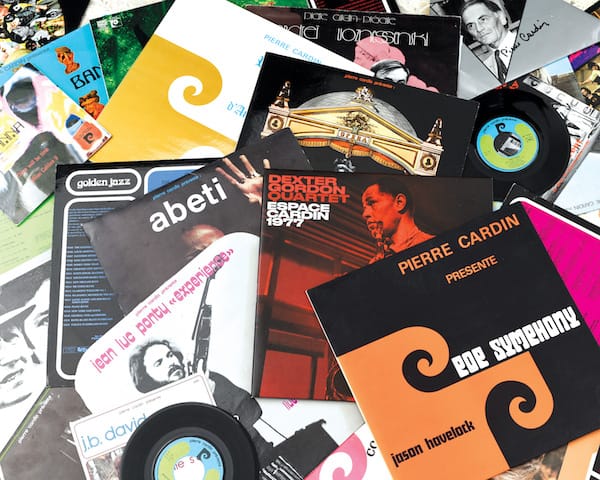 Ebersole and Hughes collect recordings on the designer’s label. 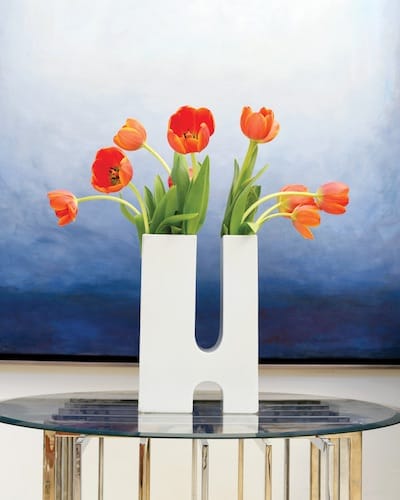 “Up until that point, we had no clue that the guy even existed,” Ebersole rather sheepishly acknowledges. “We thought it was just a brand name like Mr. Clean or Aunt Jemima. But Pierre Cardin was real. And he was, at the time, 95 years old, still living and working in Paris, and now there was a possibility we might actually be able to meet him!”

So, Ebersole and Hughes meet Cardin. The three take a real shine to each other, and suddenly Cardin’s grandnephew, Rodrigo Basilicati, who appears to be the heir-in-waiting to the House of Cardin, is suggesting that the Ebersole Hughes Company, best known for their films on the bombshell Jayne Mansfield (Mansfield 66/67) and Cher’s mom (Dear Mom, Love Cher), should make a documentary about the man that many people, including Ebersole and Hughes, consider the Fashion Godfather of Modernism. After all, they are from Palm Springs, and Cardin once had a hotel in Palm Springs, the luxurious Maxim’s de Paris Hotel, where the Hyatt now stands. (It opened in the Desert Fashion Plaza shopping mall in 1986 with Zsa Zsa Gabor, Esther Williams, and Liberace in attendance.) Perhaps this is all destined.

They start filming interviews with designers like Jean-Paul Gaultier, Philippe Starck, and Trina Turk. (Ebersole and Hughes tell a story about meeting Trina Turk: After bumping into a woman at a party for the Silver Lake Film Festival wearing a T-shirt designed by Trina Turk, they ask her if she knows Trina Turk and the woman says, “I am Trina Turk.”) And there are interviews with Sharon Stone, Naomi Campbell, and, of all people, Alice Cooper. And revelations. 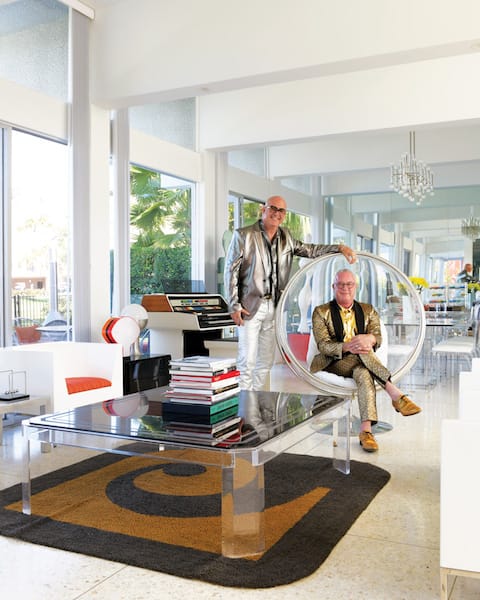 Like the fact that Cardin had an ongoing romantic relationship with his right-hand man, designer Andre Oliver, who died of AIDS in 1993. Or that those iconic collarless suits The Beatles introduced to us in 1963 were designed by Cardin. In short, in the second half of the 20th century, Cardin touched almost every facet of culture. (He is sometimes pejoratively called “The Licensing King” because his name, at one time, was stamped on more than 850 different products — from soap to frying pans.)

In completing the film, Hughes says, “We went from knowing nothing about him to realizing that he is an incredibly interesting person whose whole career and life story is more amazing than anyone could even imagine.”