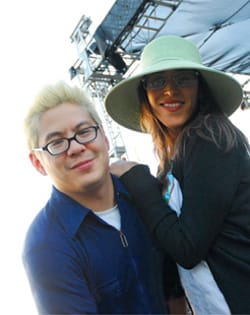 Sharon Stone jumped on stage to dance to their music at the Cannes Film Festival. Elton John and Ringo Starr have joined them. Career highlights for the band Pink Martini? Of course. The pinnacle? Not quite. China Forbes sees this June’s performance at Carnegie Hall as the peak.

“What could be more amazing?” she says.

Forbes is lead singer for the 12-member band, which performed at The Art of Food & Wine festival in Palm Desert last November. Band founder Thomas Lauderdale describes their style as “1940s Hollywood musical meets the United Nations with a little bit of Mary Poppins.”

Forbes speaks four languages (English, French, Italian, and Spanish) and sings in 12 (including Arabic and Japanese). “The band’s repertoire appeals to all ages and many nationalities because it’s very diverse, both culturally and style-wise,” she says. “We have a lot of crossover.” The international mix of jazz, samba, and classic music had members of The Art of Food & Wine audience dancing in the aisles and in front of the stage.

Within days of their Coachella Valley debut, Pink Martini bandmates boarded a plane to Hong Kong, where the band performed at a private party for Cartier’s best customers.

“It was wild. There were Hong Kong’s billionaires up and dancing to our music,” says Lauderdale, a classically trained pianist. “Cartier told us that our sole mission was to get people dancing. At first, we were skeptical.” That’s no surprise, since Hong Kong’s wealthiest aren’t known for cutting loose.

Forbes brought the house down with her rendition of “Bai Guoang” (I’m Waiting for You to Come Back to Me) in Chinese. She learned the tune in an impromptu preshow lesson. “I’ll have a native speaker teach me a song phonetically, and I get the rhythm of the language and work with that,” she explains.

Based in Portland, Ore., Pink Martini formed in 1994; sold more than 650,000 copies of their 1997 debut CD, Sympathetique; and now spends a lot of time on the road. This month, they hit France, Italy, Spain, and possibly Turkey. Lauderdale and Forbes write most of the music at Forbes’ Portland home. They record on their own Heinz record label (named after Lauderdale’s dog) and recently inked a licensing deal with a Korean label to distribute their music in that country.

“They were after us for years, and we finally signed with them. We also have plans to play Hong Kong, Tokyo, and maybe Taipei and Seoul in December,” says Lauderdale, who spent several of his high school years in Tokyo.

In addition to Cannes, Pink Martini has performed twice at the Hollywood Bowl and with the Boston Pops, French National, and BBC orchestras. They return to the Bowl to close the concert venue’s 2007 season in September. They hope to follow that up with a return to the Coachella Valley.

“We love Palm Springs and the whole area, and we really want a gig that allows us to perform here once a month,” Lauderdale says. Then, smiling, he adds, “In the winter.”

During the band’s November visit, Forbes’ only disappointed was she missing spa time at Desert Springs JW Marriott Resort & Spa, where the group stayed. “A spa day tops my list for the next time,” she says.

Read more in First Takes — Drinking It In in the January issue of Palm Springs Life.