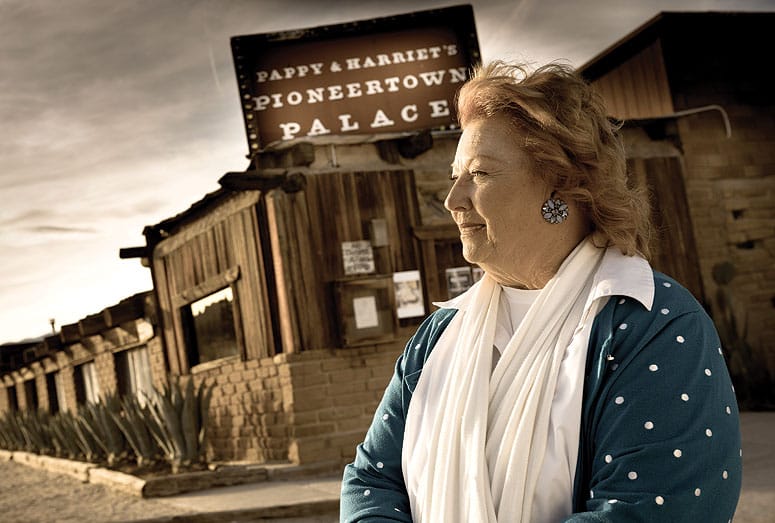 Harriet Allen Lefevre, one of the original owners of Pappy & Harriet’s Pioneertown Palace, stands outside the restaurant and entertainment venue.
Photo by Ethan Kaminsky

"This is the first time in two years that I’ve been back,” says Harriet Allen Lefevre, tears glossing her desert-sky-blue eyes as she strolls the dusty drive toward the beer garden at Pappy & Harriet’s. “It’s just too painful.”

“See that?” she says, pointing at a rustic shed in the picnic grove. “Pappy built that without one single nail, with his chain saw. It was my little storeroom.” Taking a seat at a picnic table, Lefevre tells tales about many of the joint’s other “nooks and crannies,” and the memories she and her late husband, Claude “Pappy” Allen, built together in Pioneertown after they purchased the place in 1982.

“We had so many good things going on here in those days,” she says, reminiscing about afternoons playing country music onstage with Pappy and their two then-teenage daughters; frying up Southern home cooking in the kitchen (“I should have patented cheese fries, ’cause I developed those!”); and mingling with colorful characters who came to “the club,” including a silverware roller who was oft spotted playing the spoons in the corner, as well as Hollywood actors and musicians — among them Bob Dylan, Donovan, Winona Ryder, members of Pearl Jam, and Counting Crows.

“They’d just drop in, and I didn’t even know who in the heck they were half the time — I even had Lauren Hutton in here washing dishes one night,” Lefevre chuckles. “She wanted to help. … I think that’s why they liked it here, ’cause they could just come in and be themselves.”

Lefevre lights up as she recalls the many good friends they made who were like family, and how their daughters both fell in love here. Her light becomes shadowed, tears starting to roll off her cheeks, as she speaks of why she gave it all up: “About 10 years after Pappy died, our daughter Carla went on an evening motorcycle ride with her husband. A drunk driver hit them both and killed her instantly. … To serve drinks after that was so hard for me, because it felt like I was being punished.”

Wanting to keep her mascara intact for a photograph, Lefevre shifts focus back to the beginning: The popular hangout, frequented by as many hipsters as Harley riders nowadays, began as a weekends-only biker joint called The Cantina, a modest two-room beer and burrito bar opened in 1972, when Harriet’s mother and stepdad purchased the old fixer-upper. The “broken-down” building was one of many on Pioneertown Road built in the early 1940s as an Old West movie set. “One of the things I loved about this place so much is that Roy Rogers used to make movies here,” Lefevre says. “He was my baby.”

A decade later, her mother decided to sell but wanted to keep The Cantina in the family. At the time, the Allens, who had met in a bowling alley where Harriet worked as a young girl and soon became a traveling band, were living on the road in a yellow bus they called Rambling Roads, “working the honky-tonks and singing for suppers.

“We’d go to these places and Pappy would say, ‘If you like us, you can feed us. If you don’t, you can kick us out.’ We kept a little place here [in Pioneertown] where we’d stay for two or three months at a time — the girls went to school by mail — and then we’d go back out on the road. Pappy wasn’t sure he was ready to give that life up.” But ultimately, the couple decided to settle down and buy The Cantina, which they renamed Pappy & Harriet’s and turned into a more family-friendly place.

After Carla’s untimely death (“It’s a good thing Pappy wasn’t alive to see that, because it would have killed him,” Lefevre says), she knew she couldn’t carry it on. “First Pappy’s death, and then our daughter’s … it all put me in a really bad place. A friend, Jay, had bought into it, but he wasn’t experienced in the bar business, so I had to stick with him to guard the future. And I just couldn’t do it.

“One Sunday morning — it was a weird day, and I dressed up and came to the club and was sitting in front of Pappy’s sculpture praying about what to do — the girls [current owners Linda Krantz and Robyn Celia, who would visit often from New York] came in and said, ‘Hey, Harriet, we heard you might want to sell this place. We want it. We love it. We’ll carry it on.’ We all cried. I knew they were the ones to do a good job.”

Now a resident of nearby Yucca Valley, Lefevre, remarried, returns to Pioneertown to visit with her daughter Cheryl’s family, who live in the old William S. Hart house across the road from Pappy & Harriet’s. “It’s too sad for me to come to the club, but it makes me happy to see our work here. Pappy and I are still here. … It’s like we never really left the place.”