Pioneertown was founded in 1946 and became the backdrop for a number of western films, and today is a tourist attraction just northwest of Palm Springs.
PHOTOGRAPHS COURTESY PIONEERTOWN INTERNATIONAL FILM FESTIVAL

There is no movie theater in Pioneertown, but there is also nothing like this historic town founded in 1946 by a group of Hollywood cowboys and personalities as “a permanent 1880s town for filming western movies,” according to a plaque erected in 2004 to commemorate the town.

Located about 40 minutes northwest of Palm Springs, Pioneertown is a time capsule town featuring a bowling alley that celebrated its 75th anniversary this year. It’s become a popular tourist stop over the years and even a place to put down roots.

Growing up in rural Toronto, Julian Pinder rode horses and felt part of that western culture which carried into adulthood when he would take month-long journeys into the Rocky Mountains on horseback with friends just to follow old pioneer trails. Ten years ago, Pinder, a film director and producer who created and directed the Netflix original series, Fire Chasers, with Leonardo DiCaprio in 2017, found that western mystique just outside Pioneertown and bought a 50-acre ranch. 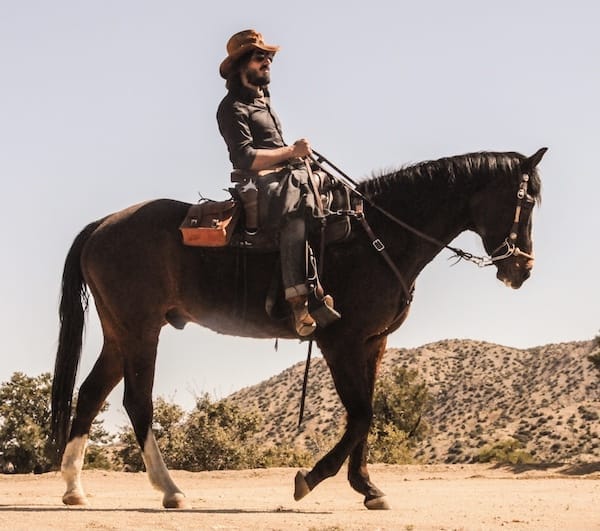 Julian Pinder expects to bring horses from his ranch near Pioneertown to the film festival so he can ride them to events.

“I dedicated more of my time to the animals, and cattle drives, and just getting back into the roots,” Pinder says, “And then being me, I started to get bored really quickly with not having a large-scale project.”

The inaugural Pioneertown International Film Festival has become that project. Slated for May 27-29, 2022, Pinder has brought in former Sundance programmer Todd Luoto to curate a collection of new and classic western films including the opener, The Last Manhunt, produced by Jason Momoa (Aquaman) along with live music, and special presentations such as spotlighting Native Americans in “The Indigenous Image in Westerns”.

What is it about Pioneertown that makes it a good setting for a film festival?

The history of all the films that were made out here, and the culture that it engendered in the western genre worldwide is really even more significant than I think most people give it credit for. I had always thought it just made so much sense to have a film festival here to celebrate this area. And then that's not even to mention just what a great, cool, experiential, and beautiful, magical place it is, not only the town, but the surrounding region.

I love this place. I've been here for a long time. I really have a fairly good sense of it. I'm friends with all the old timers. I really feel this place. And I thought if I don't really dig into doing a proper film festival here, I know that, at some point in time, relatively soon, someone's going to come out from the city and try to capitalize on it, and do something that I don't think would be a real genuine representation of the town and the area. So I just saw myself as a bit of a steward of that vision of Pioneertown to some extent, without being too egotistical. 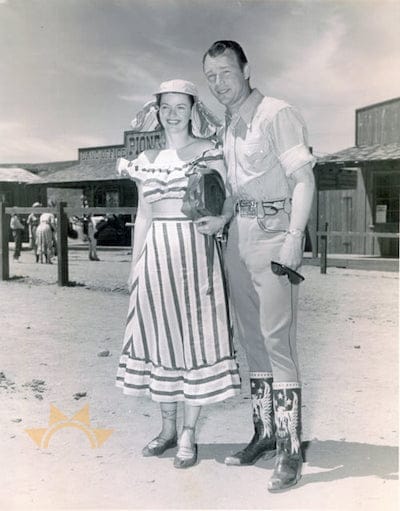 PHOTOGRAPH COURTESY PIONEERTOWN CALIFORNA ON FACEBOOK
Dale and Roy Rodgers were among the pioneers of Pioneertown (in the background).

What can you tell us about the films you plan to screen?

Todd really brought us an amazing slate of curated films that are all in the western genre, but very much not, which we take great pains to not do, which is not have a hokey, shoot’em up, costume western festival that seems like a Disneyland thing. Todd very much got the vibe of the festival and curated these amazing westerns that are really poetic, philosophical, and cinematic. They're not just these hokey things. We also wanted to celebrate the history of the western and Pioneertown to a great degree. So we partnered up with Paramount and we are screening some of their recently restored westerns. It's really cool because two of the heads of the archive division of Paramount are actually coming out to present those films, which is really fun because they're doing a masterclass on restoration as well.

Having attended film festivals yourself, what did you learn from those that you have brought to this one?

I sat down with some of my team members and I said, "I'm going to literally sit down, and just write down a list of, to me, what makes a festival great, and really, really think about it.

Do you remember what you wrote down?

A lot of the things had to do with engagement between the filmmakers and the audience, events that were experiential, fun, and unique. And then also giving a shit was a big one. I’m not going to name names here. But some of the bigger film festivals, which are the top tier festivals, are often the most boring ones, because you go there as a filmmaker, or as an audience member, and it's become so big and so corporate and it's such a business and it's basically exists so that films can be bought and sold. That's basically the reason most film festivals exist these days. And I thought, "I want to get back to the roots of what a film festival is about," when by definition, it's a festival. You're celebrating the films, and the people who made them, and the history of where that came from, and the places that it was made.

And being in Pioneertown adds such a layer of passion to this festival because it's not just a film festival in a city where we're celebrating, even if it was just a certain genre. We're literally in the place that was at the forefront of really showing the world what the western meant. It's really quite amazing. Even if Pioneertown isn't really the Wild West. We all know that it wasn't a frontier town, and we know that it was built in the '40s. So it's got that beautiful Californian half bullshit, half genuine thing that I really love. And so, so many westerns were shot out here, and all these people that, they come from Italy, and they come from Germany, or they come from South America or whatever. And they look at the desert out here, and they look at parts of Pioneertown, and this was all a part of their childhood, and a part of the western for them. This is what created the myth, or at least had a great deal to do with creating the myth for them. So the fact that we're celebrating these films in the place where that happened with people who are doing it purely out of passion, not as a business model to sell and buy films, that is what sets us apart in a huge way.

What is it about westerns that captures your attention?

I've always been just a huge fan of westerns. And I grew up in rural Canada around horses and that kind of culture. So I think that those types of films to me are very much really what's closest to my heart when I have to think of any particular genre and film. They're mythic, they've got a legacy to them. They've got the themes of individuality and the themes of honor.

They're so old school, and to some degree, hokey, but I think in a day and age like we're in now, going back to that is kind of cool, even if you're still cynical and whatever, it's like you go back to that western genre and it really sets the world straight to some degree, if that makes any sense.

Tell me about the logistics of turning Pioneertown into a place to host a film festival?

Our one limitation in Pioneertown, as you probably know, is that there is no cinema in town. That was one of our challenges. Some of the locals are like, "Oh, you're doing a film festival. That's fun. Is it a little community thing on a sheet with an Epson projector on your computer." It’s hard to explain to people that we have enlisted some of the top theater engineer people out of Los Angeles, who are going to be coming out and spending quite some time. They're going to be basically transforming the soundstage, which was where they shot a lot of the interiors of a lot of the Roy Rogers and Gene Autry stuff in Pioneertown. And then there's also a local residential barn on the outskirts of Pioneertown. And both of those are going to be meticulously made into cinemas with top theater gear.

How many tickets are you going to sell? I see ticket sales close Aug. 4.

Well under 1,000 people at the end of the day. And that's spread out over three days. We're super conscious of the fact that we do not want traffic in town. We also want people to enjoy it and be able to not be jammed into places full of people. The ratio of filmmakers and special guests to audience members at this festival is probably the highest of any festival on Earth, I would imagine, because we have like 50 amazing legendary directors, and actors, and filmmakers, and special guests coming out. 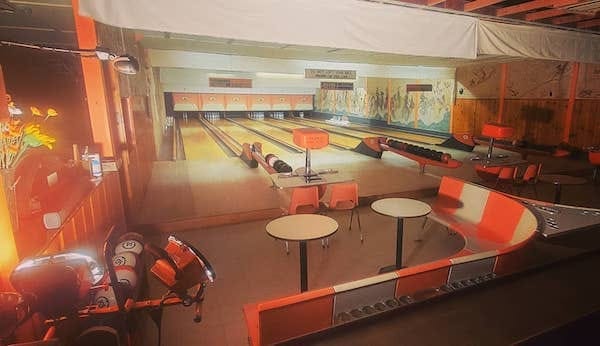 PHOTOGRAPH COURTESY PIONEER BOWLING ON FACEBOOK
Pioneer Bowl has one of the oldest Brunswick pinsetters in the country.

Do you see this as an annual event?

We're very much aiming to compete with some of the biggest small town festivals globally. We want to be a Telluride. We want to be like what Sundance was in its early years. We want to celebrate. We want to have a great festival that the audience and the filmmakers equally are dying to go to. And we want to just really celebrate the films and the culture out here, and make it into something that grows and develops, not volume-wise, but just continues to get more amazing, and more and more high caliber as the years go on.