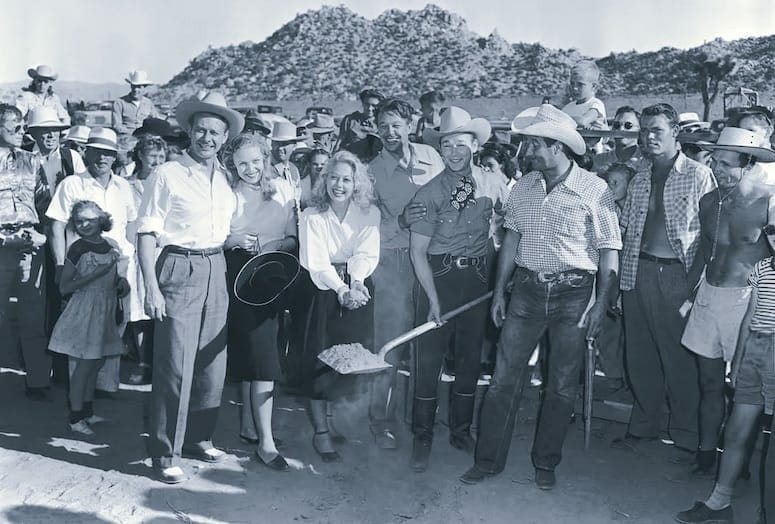 Roy Rogers (with the shovel) helped found Pioneertown back in 1946. The western town was the back drop for many films in the 1940s and '50s.
PHOTOGRAPHY COURTESY PIONEERTOWN CALIFORNIA ON FACEBOOK

Don’t expect the Pioneertown International Film Festival to blossom into an event attended by thousands.

But do expect the quality of the film festival dedicated to the western genre to continue to grow, says founder Julian Pinder.

Originally slated to run in late August last year, the delay imposed by the pandemic gave Pinder more time than he ever anticipated to tweak the inaugural festival, set for May 27-29, while shaping its intentions going forward.

Pinder shares more about how the extra time has been put to use to improve the festival with Palm Springs Life. 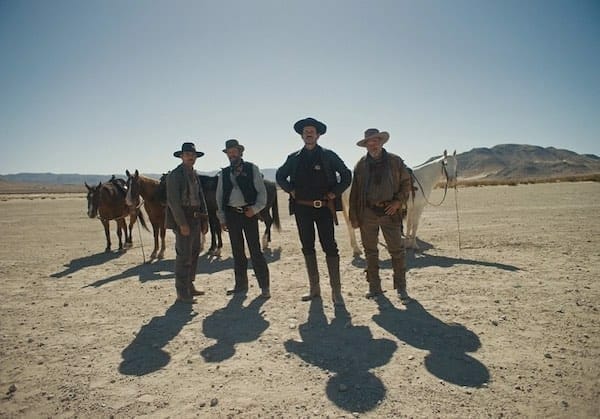 When the idea for a western film festival was first floated,  could you model it after something else or was it like starting from scratch?

The philosophy of it and the approach to it, was a bit challenging as well, because we were obviously trying to model ourselves off of the great, really small film festivals, which are still substantially larger than what we are. It's not really a growth model at all for this film festival, which I'd imagine most of them probably base their whole model on. We're not basing it on that.

We just want to stay small and community oriented. The whole Western thing was a difficult concept, because we didn't know when we first came up with this idea, whether it was feasible. We didn't know. We talked to Todd Luoto, who is our head programmer and he's programmed at a number of festivals, including Sundance. We put our heads together and made a lot of calls and had a lot of meetings with people to figure out whether it was feasible to do a festival that was only western focused.

What pitfalls did you want to avoid and are you happy with the lineup you have created?

We wanted to steer really clear of us being a hokey, shoot’em up, cartoony, only classics being shown festival. We really wanted to both focus on the western, but also really make sure that the actual programming and curation of it and philosophy behind it, was a really high caliber of filmmaking. We wanted something that really we could become a globally recognized serious film festival. So it took us a long time to figure that out, but the long and short answer is that we figured out we could do it. And remarkably, somehow we've come out with this great program that's got quite a number of contemporary westerns, pretty much every one of them with a director, writer or producer coming to present them in person. And we've got a very good handful of world premieres, one of which being the Jason Momoa-produced, The Last Manhunt.

What ’s new that you have added to the festival?

We have partnered up with The Autry Museum of the American West. They are actually presenting The Last Manhunt now, which is the opening night film. We've been so happy to have their input. They're presenting some talks and presentations at the festival, so that's a new thing, which to us is really fantastic, because they obviously bring a really high caliber of curation and a really high profile, being a really fantastic museum.

The movie The Inglorious Serfs, which is a really cool [Quentin] Tarantino-esque, contemporary western, is going to be at the festival. And the director's a Ukrainian gentleman, Roman Perfilyev. It was a Ukrainian production. And initially, when we connected with him, he wasn't able to come, just because of the logistics, all the travel and everything. And just now, sadly coincidental,  he's been in the U.S. exiled during the war just in the last couple of months. And because of that, now we're able to fly him to the festival and he's able to present his Ukrainian western.

How many total screenings will you have?

We’re somewhere in the 20 to 25 range. We're limited to our two screening rooms. We're trying to focus on really high quality, so it's going to be the three-day weekend from morning until night.

Tell me about the short film program?

Todd (Luoto) has put together a fantastic two different programs of shorts and they are all primarily unreleased as of yet. Some of them are special released, but most of them are unreleased. We’ll have verything from animations to live action, to really experimental things. We've got two blocks of those, I believe, and they are about two hours each where you could come check out a really varied scope of different short animation, non animation, short westerns, within those two-hour blocks. And a lot of those directors are also coming out to do Q and As and hang out at the festival.

That’s not always the case where the filmmakers stay for the whole weekend of films?

And chances are, when you walk into the bar to have a drink between screenings, you're going to be sitting beside a number of the filmmakers whose films you've seen. So it's going to be really, really unique in that sense, that we're really bringing the audience and the filmmakers together in a way that I have never seen before in all the many film festivals I've been to.

How much of Pioneertown can guests expect to see?

A huge number of historic buildings in town are being used for the festival in different parts of the town. So just organically, by going to screenings, by going to the events, by hanging out, you're going to be seeing pretty much all of Pioneertown. we're going to have these fun things happening between screenings, where you walk out of a screening and there's going to be the horse and carriage coming through as part of the historic celebrations that we do every year and a little fun, little gun fight. We wanted to really balance the high caliber of films and filmmakers with the really fun, engaging, immersive entertaining aspect of the Pioneertown. I think we've really hit the nail on the head on that. Like the Sons of the Pioneers, who are playing the closing show on Sunday night. A lot of them grew up in Pioneertown as kids. Their fathers were all the original members of the group. Dusty Rogers, who is Roy Roger's son, is the leader of the group. So he'll be hanging out all weekend as well.