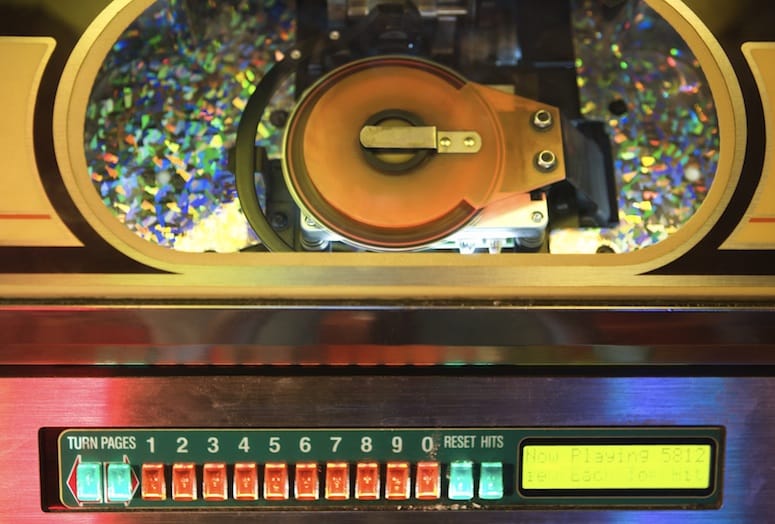 You might associate jukeboxes with diners and the 1950s, but that is so last century. These days, you might not be able to drop a coin into a curvy machine blinking Kool-Aid-colored lights and watch a vinyl 45 drop onto a turntable, but digital technology has granted access to thousands of songs from a smartphone app or with the swipe of a credit card. (And some actually accept cash money!)

The digital divas look more like a computer on steroids than a music box, and the songs cost more than a dime, but you can still nurse a beer to the musical accompaniment of your choice. I checked out several bars in Palm Springs and around the Coachella Valley on where these “music boxes” stay busy all week long. Although this Western-style joint with its wood-paneled walls and gargantuan buffalo head monitoring the clientele is best known for its nightly karaoke, its jukebox gets plenty of play, too. Like its music selections, the crowd is “all over the place,” according to bar manager Chris, who declined to give his surname. One night, two teachers discuss work over beer pints at the bar, where two 60-something men dressed in golf shirts also sip Smirnoff on the rocks. Meanwhile,  guys orders up pitchers by the pool tables. For the most part, says Chris, “it’s a locals’ place.” First song heard during my visit: “The Vengeful One” by Disturbed. 80956 Highway 111, Indio. 760-347-1522.

This valley stalwart probably will be open when you want it to be: It’s closed only six hours a day. The bar offers a cruiseship lineup of things to do. There’s pool, shuffleboard, darts, live music several nights a week, and, yes, a jukebox, which is usually busy belting out classic rock tunes, according to owner John Labrano. Golfers stop in for a pre-tee-time Bloody Mary, and a party crowd rolls in later in the evening. First song heard during my visit: “Traveling Riverside Blues” by Led Zeppelin. 73290 Highway 111, Palm Desert. 760-346-0191; redbarnpalmdesert.com

This dark lounge, sparsely decorated with a sprinkling of high-top tables and a dismantled piano hanging on the wall, is the perfect place to disappear for a bit, whether it’s with a beer at the bar or an icy martini on the royal blue velvet banquette. Bartender Heather Kekahuna is mixing cocktails for a couple of patrons during an early evening happy hour. Cover bands set up in the corner a few nights a week, but otherwise, the crowd loves playing Top 40, glam rock, and ’80s hits, according to Kekahuna. “We actually got rid of the DJs here since people come in to use our jukebox. It’s a goldmine.” First song heard during my visit: “Blurred Lines” by Robin Thicke (featuring T.I. and Pharrell). 188 S. Indian Canyon Drive, Palm Springs. 760-218-6439 .

* “I Love Rock ’n’ Roll,” performed by Joan Jett and the Blackhearts, written by Alan Merrill and Jake Hooker.