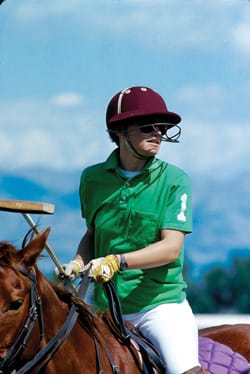 Actress Pamela Sue Martin, who played roles from Nancy Drew in Nancy Drew Mysteries to Fallon Carrington Colby in Dynasty, also became an avid polo player after her 1984 divorce from former polo player Manuel Rojas. Here, in an excerpt from her recently completed autobiography, she talks about her experience in the male-dominated sport and shares her memories of playing in the Coachella Valley.

A Conversation with Pamela Sue Martin
Exclusive interview. Only online.

“If it feels good afterward, do it” was the motto of my horse trainer friend, and nothing felt better afterward than a game of polo. I was now playing my game. It was part of the legacy Manuel left behind when we parted, along with a few of his old polo ponies.
I could barely control one of those horses as it ran me all over the field, and sometimes — to my great embarrassment — off the field entirely.

In the mid-1980s, Bill Devane put together a small celebrity polo team composed of the actors Alex Cord, Doug Sheehan, and me, the only girl. We were sponsored by Piaget and later by Cadillac. Of course by the time I paid for my seven horses and all of the rest that went with the sport, there wasn’t a cent left over. But I didn’t care; I was in another world.

The world of polo has a subculture all of its own. In Palm Springs, where I set up shop for the winter, it worked something like this: First, you had your patrons; usually middle-aged males who’d made a killing at some business or another and were ready for a big, macho challenge. They’d invest in some horses, a groom to take care of them, hopefully learn how to ride well, and then begin to learn the game. That’s where the big money came in, because polo is a pro-am sport.

The sport is so difficult that a patron needed to hire a couple of pros to make his team happen. Most often those pros would turn out to be from South America, where the greatest players hail from, though there were also pros from Mexico, England, the Dominican Republic, and America as well. There was a complete stratum to the polo fields, starting with the grooms and horse traders, moving up to horse trainers, regular players, the big guns (rated pros), and then big money (patrons who hired the pros). Big money usually showed up only on weekends for the show games. In Indio in 1984, the biggest kahuna of all was a 10-goal, Argentine polo player named Julio Zavaleta. He was simply called “God.”

I didn’t really fit in anywhere, but I relished my existence in the fray. I especially enjoyed the weekdays, when the atmosphere was a lot more low-key. Every day at the stables, the horses were exercised, often in groups. There were also practice games and arenas for practicing your own game. I never missed a day, so feverish was I to become at least adequate at the sport. I wanted to be proficient enough to play front man on a team that had already been put together by a patron, which I managed to do several seasons. Being something of a novelty allowed me to play at a higher level, and all of the exhibition matches our celebrity team played across the country were with some of the most celebrated pros in the world.

I also enjoyed the simple things, like hanging around the stables in the sunshine I had long craved. I’d stand in the doorway of my tack room, watching people riding back and forth from their games, talking about “God” (the player), and horses. I liked to cool my horses down with a long walk in the desert, which was still possible back then. Some days, I would share maté (an Argentine tea brewed in a bowl and passed around communally) with the Argentine grooms in their tack rooms. My passable Spanish allowed this entree, and I was thrilled to be one of the guys. Later on in the day, we would sit around and drink Coronas or wander over to a barbecue at sunset at somebody’s barn.

I shared an apartment with Kate Weber, who was Bill Devane’s horse trainer. The apartment was in Indio. It sure was a far cry from a Dynasty set. In fact, it was a dump. I may have held a mortgage for no less than three homes at that time (one in Santa Monica, one in Northern California, and one in Sun Valley), but I would have traded any one of them for the life I was living in the dump.

Kate was the college roommate I never had, and I made up for lost time drinking beer with her and laughing the nights away, often with actor Alex Cord, one of my teammates. One afternoon found us scrambling like lunatics to clean up our wreckage of a place, as “God” was coming over for a visit.

When he and I showed up later at a dinner at Bill Devane’s, he just gave me that deadpan look and said, “It figures.”

Far from learning my lesson, I also hooked up with Chile’s best polo player for a time, Samuel Moreno. We spent a summer in Southern England, where he played with Prince Charles. Talk about strata — nothing like tea at Kensington Park or living in Cowdray Park (the grounds of Lord Cowdray) for a dose of uptight bluebloods hanging on by their toenails to the last remaining shards of an empire. South American polo pros and actresses were considered worthy of the cocktail parties, but moreover were necessary to keep these people from choking to death on the boredom of their rigid stratospheres.

I loved England and the people I met filming in London, but the polo scene was just too much for this egalitarian American. I wasn’t even allowed to play on certain fields, as I was not “to the manor born,” though I was invited to play lots of games up in Liverpool, where a man is no more than a man.

Meanwhile, back in the United States, our celebrity polo team played exhibition matches all over the country from Meadowbrook to Chicago to Honolulu. With the exception of Massachusetts (still closer in spirit to England than the others, despite the tea party), the scene was a lot more relaxed than in England. Thank God, too, because I remember one such match that still makes me cringe.

I was on a team with Bill Devane and we were playing in front of a crowd of thousands in San Diego. Bill was the best celebrity player by a long shot, the real deal, but he would scream and yell throughout the games at whatever appeared to be in his way. On this particular day, it appeared to be me. Only I didn’t agree.

“Damn it, Pamela, move over,” he screamed for the entire world to hear.

I swore back at him and matched him just as my horse flew by the stands. On it went, this charming display for a charity event. We never breathed a word about it to each other later, which made me feel that I was truly one of the guys.

We didn’t travel with our horses. The players at the clubs where we played usually lent them to us, and so six new horses always comprised an unknown element to the exhibition games. So it was on the day I arrived to play at a huge exhibition in Washington, D.C. It was going to be a big deal. The crowds were gathering, and we would be playing with some very high-goal players. I needed time to acquaint myself with the horses I would ride, but I was running late and dashed out to the barn, where everyone appeared to be ready. I quickly struggled in the hot, muggy weather to get a handle on the horses that had been left to me. I took pride in that I could ride anything, but that wouldn’t be the case this day. Finally, I broke down in tears, lamenting that I couldn’t get anywhere on those horses.

Miraculously, the owner of the club appeared and lent me the most amazing set of six polo horses I would ever experience. They were machines! I raced onto the field and never stopped racing. It was an outrageous game; and at the end of it, I received an MVP award. It was a huge honor, since I was the only girl out there on the field.
“All Pamela has to do is cry and she gets all the best horses,” Bill grumbled. But I didn’t care; it was a great day for me.

I also played in women’s tournaments from time to time, though, with the exception of California, women players were few and far between. Stefanie Powers, always the great adventurer, was responsible for actually getting me into my first polo match. She had heard that I was married to a polo player, and that was enough for her. When I told her that I hadn’t actually played a game of polo, she just carried on about the match we were going to have. In her mind, all you needed was a horse and saddle. It was a celebrity event to raise money for her African game preserve.

Looking back, it was insane to throw a bunch of amateurs out in the ring (indoor polo is played in a ring). Polo is even more violent indoors because people and their horses are constantly crashing into walls, or each other, or both. We not only managed to survive the experience, but each and every one of us owned a string of horses before the year’s end. Stefanie had turned us all into fanatics.

I had the perfect opportunity to prove myself when Maj. Ronald Ferguson came to Indio to play an exhibition match. The father of Fergie was well known in the press as Prince Charles’ polo dude, the height of pomp and circumstance. Not surprisingly, the match would be hailed as England vs. America.

I was playing on the American team along with Bill Devane, Doug Sheehan, and Joel Baker (one of America’s greatest players). England’s team comprised Tommy Lee Jones (another celebrity polo player who, like Devane, played well enough to be considered the real thing), Stefanie Powers, James Morrison, and Maj. Ferguson.

Playing the forward position to his back, I had my sights set on the major. He didn’t know it yet, but this Englishman was going down, as I’d be taking him out. The game began; and just as he went for the ball, I smashed him off the ball as hard as I possibly could. He looked stunned.

The Indio thermostat hovered at about 100 degrees; and as the game progressed, the Brits were sucking wind. I continued to take out the major and also had the good fortune to score no less than two goals. It was my best game!